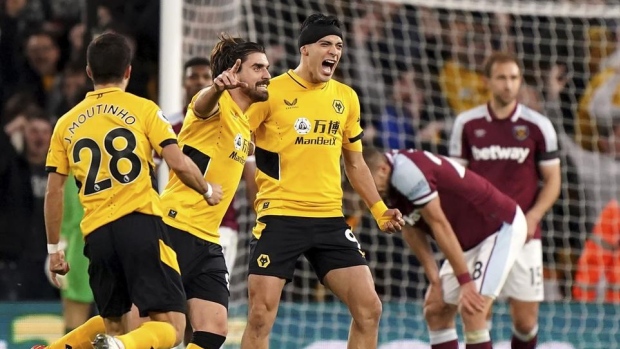 WOLVERHAMPTON, England (AP) — Raul Jimenez scored the only goal as Wolverhampton ended West Ham’s winning run with a 1-0 home victory in the Premier League on Saturday.

Jimenez netted his third goal of the season in the 58th minute having been teed up by Daniel Podence, who had twice been denied by goalkeeper Lukasz Fabianski earlier in the second half.

It was West Ham's first away loss in the league since April and ended a run of four straight wins.

For Bruno Lage’s Wolves it was a fifth win in seven games and lifted them up to sixth in the table, while David Moyes’ Hammers remained third ahead of Liverpool’s clash with Arsenal later on Saturday.

West Ham thought it had taken the lead just before the interval but Kurt Zouma’s header was disallowed for a foul.

Three minutes into the second half, Fabianski did well to get down and turn Podence’s strike around a post, and the goalkeeper produced another fine save to thwart the Portuguese in the 56th.

Fabianski was finally beaten when Podence laid the ball to Jimenez, who swept the ball into the bottom corner from the edge of the box.