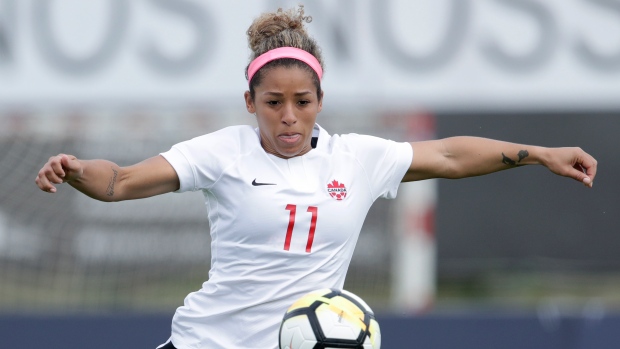 Known as “The Destroyer,” Scott is one of three players on the roster with more than 100 caps to their name. Scott has been to two Women’s World Cups, has won two Olympics bronze medals, and is one of Canada’s best defensive players.

Scott began in the Canadian program in 2003 at Under-16 camp. Three years later, she played every minute for Canada at the 2006 FIFA U-20 Women’s World Cup, and was part of a squad that featured current teammates Sophie Schmidt and Stephanie Labbé.

Scott spent four years at the University of Manitoba, and is the only player on the roster to have attended a Canadian university.  She didn’t earn her first invite to senior camp until November 2009, when she was 22.

Three months later, she made her first appearance after subbing into a game against Switzerland on Feb. 24, 2010. The following year, she was part of the roster for the 2011 FIFA Women’s World Cup, where she made two substitute appearances.

It wasn’t until John Herdman took over as head coach after the 2011 Women’s World Cup that Scott became a regular in the Canadian lineup. She won gold in the 2011 Pan American Games, starting in four of Canada’s five games.

Scott earned her nickname (started by Herdman) during Olympic qualifiers, and she fully embraced the moniker at the London Games. She played every minute of Canada’s six games, punishing opposing players with fearless tackles. She also had her own heroic moment during the bronze medal match against France, when she cleared the ball off the Canadian goal line in the 70th minute.

After stints with the Vancouver Whitecaps and FC Kansas City in the NWSL, Scott joined Notts County in England’s Women’s Super League. At the time, Scott was one of the few players on the Canadian roster to play overseas. She returned to the NWSL in 2016 and has played with the Utah Royals for the past two seasons.

As Canada’s premier holding midfielder, she patrols in front of the back line, helping to nullify the opponents’ attack. Despite being just a little over five feet tall, Scott is a physical force, capable of delivering punishing tackles.