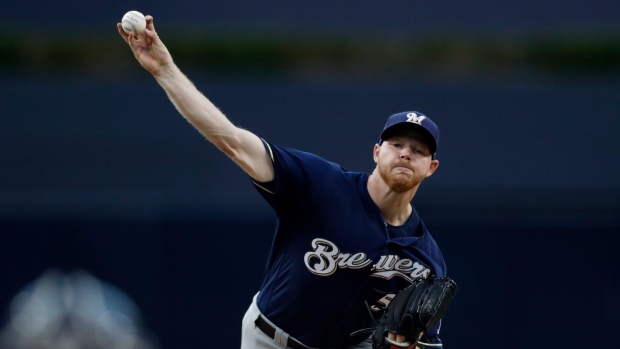 MILWAUKEE — Travis Shaw made the all the difference for Brandon Woodruff.

Woodruff struck out a career-high 12, Shaw homered and the Milwaukee Brewers beat the Cincinnati Reds 7-5 on Sunday.

"That ball was crushed," Woodruff said of Shaw's big hit in the third off Anthony DeSclafani. "After that, we started getting to him a little bit, making some good swings, get some guys on base, some big hits and a big inning."

Shaw deflected any praise and instead focused on the batters ahead of him in the order.

DeSclafani (4-4) struck out the first six batters, matching the franchise record set by Robert Stephenson against Pittsburgh on Aug. 25, 2017. But the streak ended when Shaw hit the next pitch 465 feet to the bleachers in right field for his sixth home run.

Location that had been so good for DeSclafani quickly turned in the batter's favour.

"Everything was just kind of middle and up," DeSclafani said. "Got behind in the count. Missed my spots. They just took advantage of it."

"It seemed like any time he missed over the plate, they were ready for it," Bell said. "That third inning happened quick."

Woodruff (9-2) cruised through the first five innings, allowed Joey Votto's three-run homer in the sixth and struck out two to finish the seventh. Milwaukee improved to 13-3 in the right-hander's 17 starts this season. Woodruff is tied with Hyun-Jin Ryu of the Los Angeles Dodgers for the NL lead in wins.

Woodruff wanted another inning after the sixth. Brewers manager Craig Counsell gave it to him.

Alex Claudio got two outs in the eighth and Jeremy Jeffress finished, giving up two runs in the ninth on Yasiel Puig's RBI double and Curt Casali's single.

The Brewers tacked on two more in the fifth off reliever Zach Duke on a sacrifice fly by Eric Thames and Arcia's 10th home run.

DeSclafani struck out a season-high nine and walked one in 4 1/3 innings. Votto also had a pair of singles and a walk.

Reds: CF Nick Senzel was back in the starting lineup. He left Friday night's game with a headache after homering in the fourth. Saturday, he struck out pinch-hitting in the seventh, but stayed in the game in centre. ... LHP Alex Wood (lower back) felt good after throwing 42 pitches Saturday during a live batting practice session. He'll throw a side session Tuesday for Triple-A Louisville and makes a rehab start there on Thursday. ... LHP Wandy Peralta (right hip flexor strain) is scheduled to throw a bullpen on Tuesday in Anaheim.

Brewers: Counsell tabbed RHP Adrian Houser (2-1, 2.27 ERA) to start Wednesday for struggling RHP Jimmy Nelson (0-2, 9.75 ERA), who was moved to the bullpen. . CF Lorenzo Cain got the day off. Ben Gamel replaced him.

The Reds framed pitcher David Hernandez's locker with silver balloons in honour of his 10 years in the majors. He beat Detroit 5-1 on May 28 in his debut with the Baltimore Orioles in 2009. He also pitched for Arizona, Philadelphia and the Angels before joining Arizona in 2018.

Reds: RHP Tyler Mahle (2-7, 4.17) faces LHP Andrew Heaney (0-1, 5.68) and the Los Angeles Angels for the first time on Tuesday in the opener of a two-game interleague series at Angel Stadium.

Brewers: RHP Zach Davies (7-1, 3.06 ERA) starts against LHP Marco Gonzales (8-6, 4.38 ERS) and the Seattle Mariners for the first time on Tuesday in the opener of a three-game interleague series.