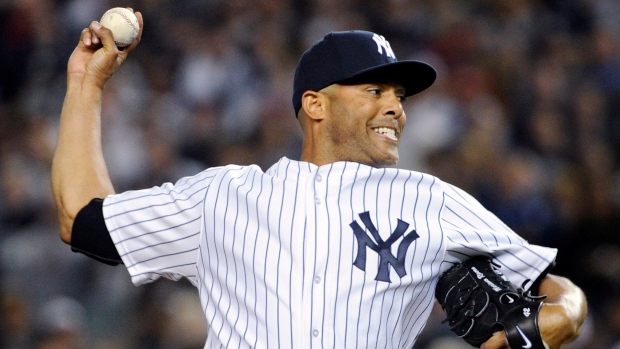 COOPERSTOWN, N.Y. — It never changed for Mariano Rivera — from his childhood in the fishing village of Puerto Caimito in Panama to the pitcher's mound at Yankee Stadium.

"I always wanted to be the last guy to kick the ball or took the last shot at the basket. Give me the ball," Rivera said. "I wanted to contribute to this victory. I wanted to help my team do whatever it took to win, and it worked many times."

With that mindset came greatness.

A lightly regarded pitcher when signed as an amateur free agent with the New York Yankees in 1990, Rivera struggled as a starter but found his niche as a reliever with a devastating cut fastball.

The Yankees won seven pennants and five World Series with Rivera in the bullpen. His major league record of 652 saves was his ticket to the Baseball Hall of Fame. Not for nothing was nicknamed Sandman, after the Metallica song "Enter Sandman" that boomed across Yankee Stadium whenever he headed to the mound, ready to silence bats.

His greatness on the mound and his humble spirit — win or lose — helped Rivera achieve another milestone. He's the only player in history to be elected unanimously , receiving all 425 votes in the January balloting.

"I feel humbled that I was the one that the Lord blessed," said the 49-year-old Rivera, who will be inducted Sunday. "It won't change my life, but it's something that you know that you were the first one. That is special."

Rivera joins Rod Carew as the only Panamanians elected to the Hall of Fame. He heads a class that also includes pitchers Mike Mussina, Lee Smith and the late Roy Halladay, and designated hitters Edgar Martinez and Harold Baines.

Baines and Smith were selected in December by a veterans committee. Rivera, Mussina, Martinez and Halladay were elected in January by the Baseball Writers' Association of America.

Rivera grew only stronger in the post-season, allowing just 86 hits with 110 strikeouts, 21 walks and only 11 earned runs in 141 innings and registering 11 saves in the World Series. He also was 4-1 in World Series clinchers, the lone loss in 2001 to the Arizona Diamondbacks on a bloop single by Luis Gonzalez with the bases loaded in the bottom of the ninth.

"When it comes to the playoffs, you're talking about facing the best of the best in the critical situations and critical times," said Rivera, who will deliver part of his induction speech in Spanish to a crowd local officials project to be around 50,000. "I wanted to be in those situations. I wanted to be the last guy that throws that last pitch. I have a passion for it.

"I maybe believe that that was the situation that my abilities went to a different level. Thank God that I was able to function on those critical times."

And Mussina was thankful for that — Rivera saved 49 of his victories.

Drafted by the Orioles after helping Stanford to two straight College World Series titles in the late 1980s, Mussina went 270-153 in 18 years in the majors and became the first AL pitcher to win at least 10 games in 17 straight seasons. He spent his first decade in Baltimore before signing as a free agent with the Yankees in December 2000, but that elusive title he was chasing never came. The Yankees lost the World Series twice during his eight years in New York.

"I feel really lucky," Mussina said. "It's kind of neat ... to be in a situation like this with guys that you played with. I'm honoured to be able to stand up there with those guys."

Martinez, born in New York and raised in Puerto Rico, had to overcome a condition that prevented his eyes from seeing in tandem. He struggled through his first five seasons with the Seattle Mariners. He initially feared the switch from third base to designated hitter, but his passion for preparation and training served him well. He was honoured as the AL's outstanding DH five times and the award now bears his name.

When he retired in 2004, Martinez was one of only six players in major league history with a .300 batting average, .400 on-base percentage, .500 slugging percentage, 500 doubles and 300 home runs. And he's beloved in Seattle, where he spent his entire career.

"I'm very humbled to see the support that the fans had given me through the years," Martinez said. "It's been incredible and it feels really good to be able to go in and I think they played a big role. I got a lot of support."

Baines played 22 seasons for five teams (14 with the White Sox) and was a six-time All-Star. Soft-spoken, modest and a model of consistency, he was popular with fans, teammates and owners. He retired in 2001 with 2,866 hits, 1,628 RBIs and 384 homers , solid numbers that were respected but not enough to get him elected by the writers.

That's all in the past now.

"I'm very honoured, very grateful," he said. "Playing for 22 years just trying to be as consistent as I could throughout my career, I think I accomplished that."

Smith was an imposing figure on the mound at 6-foot-6. He pitched 18 seasons for the Cubs, Cardinals, Red Sox, Yankees, Orioles, Angels, Reds and Expos before retiring in 1997. His 478 saves and 802 games finished rank third all-time. He was a unanimous pick by the Today's Game Era committee.

Smith is stoked for his special moment.

The ceremony will be tempered by sadness when Halladay is honoured. He retired in 2013 with a 203-105 record and was a two-time Cy Young Award winner in 16 seasons with the Blue Jays and Phillies. He joined Don Larsen (1956) of the New York Yankees as the only pitchers to throw a no-hitter in the post-season. Halladay opened the 2010 NL Division Series with one against the Cincinnati Reds in his first career playoff start. He also tossed a perfect game during the regular season against Miami.

The son of a commercial pilot, Halladay was enamoured with flight as a boy. He was flying his own plane when it crashed into the Gulf of Mexico in November 2017, killing him at age 40. His widow, Brandy, will speak in his place Sunday.

When the festivities begin, a record 59 Hall of Famers are expected on the podium, including the six newcomers. Rivera figures there's a good chance he'll be the closer, and if it's anything like his tear-filled final appearance with the Yankees it'll be a moment to remember.

"I don't know how I'm going to be," Rivera said. "That question was asked about my last day at Yankee Stadium, and you saw what happened. One thing that I know is that I will ... enjoy every moment."