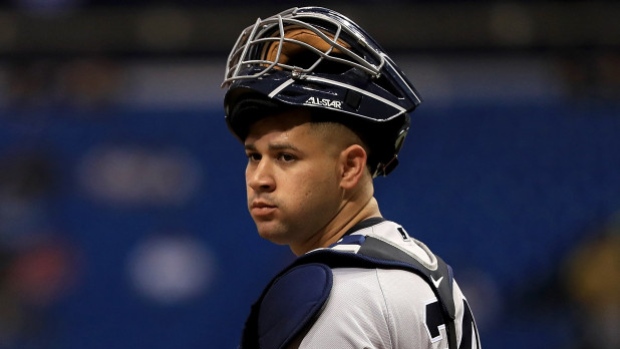 NEW YORK — Yankees manager Aaron Boone wasn't sure Wednesday what his lineup for the next day's Game 4 of the AL Championship Series would look like.

Gary Sánchez will be behind the plate, though — whether many in the Bronx want it that way or not.

Boone doubled down on his defence of Sánchez after Wednesday's scheduled Game 4 was postponed a day due to rain. Boone said his catcher has been "excellent" defensively, and he wouldn't hesitate to start the two-time All-Star against the Houston Astros.

New York lost to Houston 4-1 on Tuesday to fall behind 2-1 in the series. One of the Astros' runs scored when Sánchez couldn't get in front of a wild fastball from left-hander Zack Britton with a man on third base, a play that prompted a lot of criticism from Yankees fans.

"He's been excellent behind the plate from a game-calling standpoint, from a game-plan target, receiving," Boone said. "A lot of people are making a lot of the block. There's a lot of 94 mph fastballs that guys don't block. Guys aren't always set up to block a fastball. That's kind of a 50/50 play."

Often maligned for his glovework in the early stages of his career, the 26-year-old Sánchez has become a star because of his dangerous bat. That stick has gone silent this post-season. He's 2 for 21 without an RBI in October after missing much of September with left groin soreness — a recurring problem this season.

"I feel like Gary has been back long enough now to certainly be in the flow and the rhythm of regular play," Boone said. "Again, hopefully this starts real soon for him."

Yankees pitchers have praised Sánchez's defence this post-season. Reliever Adam Ottavino said he was impressed with Sánchez's work behind the plate in his first season with the Yankees.

"I know there's been a narrative about his catching," Ottavino said. "I thought he's been pretty awesome the whole year."

"Even last year, I was pleasantly surprised," echoed Britton. "I had heard a lot of negative things about him. I didn't find any of it to be true. I thought he was a really good catcher, actually, has a good feel for game calling."

Advanced defensive metrics have generally graded Sánchez well, giving him above-average marks for pitch framing over his career. There's never been any question about his throwing arm.

"The bottom line is his body of work in this post-season, and frankly down the stretch in the second half of the season defensively, has been excellent," Boone said. "So that part has me feeling really good about him. And just knowing how talented of an offensive player he is, I always feel like he's a pitch away or an at-bat away from really getting locked in and changing the course of a game.

"So clearly he hasn't been at his best offensively but with a guy as talented as he is, I think that's right around the corner always."