Prioritizing skill on the blueline has been a focal point for National Hockey League teams for more than a decade. Organizations understand that mobile, skilled defenders who can skate out of trouble and transition the puck can be worth just as much as the hulking, shutdown type.

There are a dozen or so elite defenders around the league – most of them well inside of their 20s. On Saturday night, the Toronto Maple Leafs got a look at one of the best in the business.

Colorado defenceman Cale Makar has been dazzling the league for three seasons now. And with all due respect to Adam Fox, Victor Hedman, and Charlie McAvoy, he may already be the most dominant player at his position. A freakish combination of skill and athleticism, Makar unlocks another element of a fast-paced Colorado attack that can be impossible to slow down most nights.

It’s not hard to draw a straight line from Makar to some of the greats who preceded him. If you muted the television and rolled the calendar back seven years or so, you would think you are watching Erik Karlsson in his prime, the most gifted offensive defenceman we have seen since the Nicklas Lidstrom era.

But Makar seems cut from a different cloth. Since entering the league, Makar has averaged 0.73 goals per 60 minutes of play. That’s best amongst all defencemen, but it’s also strong in comparison to quality forwards around the league.

This spans the entirety of Makar’s career and reinforces what we think about Makar in relation  to his peers at the position: 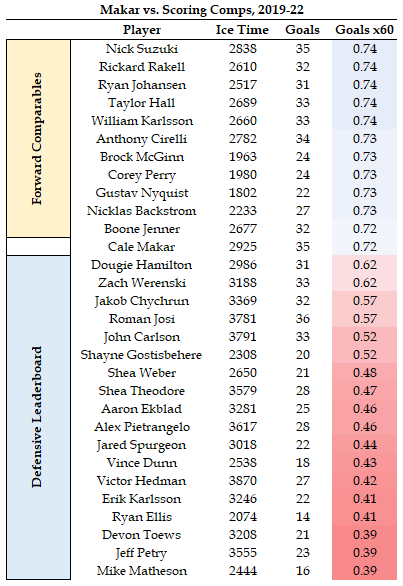 It’s hard to describe the advantage a team like Colorado has with Makar, who scores goals like a second-line forward despite his position. Couple Makar’s ability to score goals in bursts with the passing and playmaking ability that complements a lethal group of forwards up front, and it’s not hard to see why Colorado’s offence can be machine-like.

Makar has taken it to another level this season. His 15 goals in 27 games has him scoring at a 46-goal pace for an entire season. Some of this is fun with small samples, some of this is just the reality of a player shooting nearly 20 per cent out of the gate – a number that won’t sustain itself over time.

But Makar has already banked those goals, and we have to consider that our priors for a player like Makar’s skill set are quite different than another defender – both because of his individual skill, and the offensive opportunity afforded to him playing on a team like Colorado.

One of the things I’ve become curious about is what Makar’s season could end up looking like relative to some of the best performances since 2007-08.

We all remember the apex: Mike Green’s absurd 31-goal season in Washington back in 2008-09. How does Makar’s season to-date compare to Green and other high-scoring years by defencemen since that time? 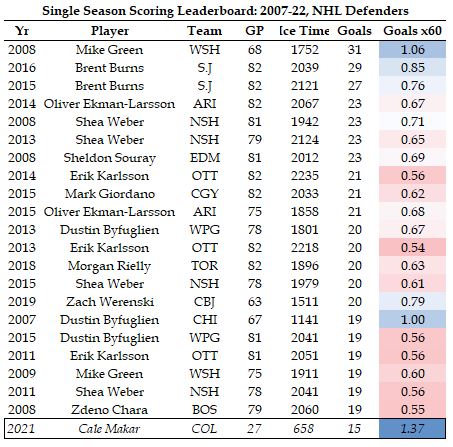 There are an awful lot of all-stars and a handful of future Hall of Famers on this table, and Makar is looking up at them – for the moment, anyway.

You can see that as a function of his usage, Makar is scoring more goals than any of these elite defenders did in their deadliest season, and by a considerable margin.

Makar is quietly setting the stage for a fascinating race for the rest of the season. No defender in the modern era has beat Green’s 31 goals; the most goals ever scored by a blueliner in a single season is owned by Paul Coffey (48 in 1985-86) and Bobby Orr (46 in 1974-75).

Coffey and Orr played in different eras and those records would seem out of reach. But I remind you: Makar’s season is a third of the way done, and that’s exactly the scoring pace he is carrying.

With a little luck, we could be watching one of the more special seasons in recent history. Heck, maybe we already are.