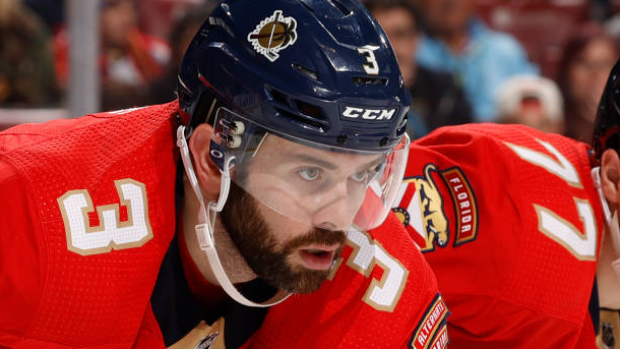 So, Florida Panthers defenceman Keith Yandle may be available.

TSN Senior Hockey Reporter Frank Seravalli reported this week that the 34-year-old blueliner has “fallen out of favour” with the Florida Panthers and will not factor into their plans this season. It’s a stunning rebuke of a talented, albeit aging player who has been a mainstay on the Florida back end since the 2016-17 regular season.

Yandle won’t be mistaken for a high-end defender at this point in his career, but to transition from top-four minutes to healthy scratch and the trade block in such short order is curious.

From a roster-building perspective, managing Yandle out of the organization makes some degree of sense. He is no longer a $6.3-million-a-year-calibre player, and the idea of floating that contract for three more seasons – especially with a number of young defensive prospects prepared to make the jump – may be poisonous from an economics standpoint.

Pair that with Quenneville cutting Yandle’s ice time, and you have all of the ingredients for an ugly divorce.

There may be other contributory factors that we aren’t privy to, but one thing seems clear: Yandle is available. The question becomes whether or not Yandle can still contribute for a team at this point in his career, and what the economics of a trade may look like. (Keep in mind Yandle has a full no-movement clause.)

The starting point for any sort of player evaluation centres on his on-ice results, in particular at even strength. Players who are still positive contributors – perhaps they are great distributors of the puck, or great shooters, or strong interior defensive players – tend to see a positive impact on teammate performance and, correspondingly, a positive impact on their team’s win-loss record.

It’s a fascinating story for Yandle. The Panthers have been four goals better than their opponents with Yandle on the ice, and last season (49 goals for; 41 goals against) was his best differential in years.

But the underlying numbers are nowhere near as encouraging. Expected goals have Yandle in the red for four consecutive seasons, and that correlates with the Panthers being -212 shots under water over that same stretch: 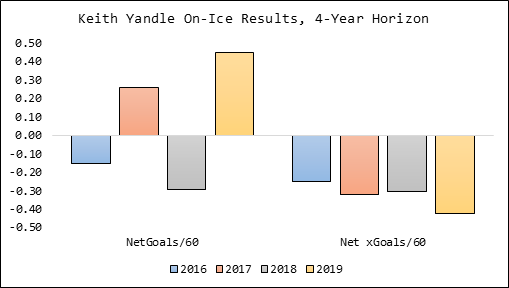 The first question that pops up: How are the Panthers beating expectations with Yandle on the ice? The answer, unequivocally, is goaltending.

Panthers goaltenders have bailed out the Yandle unit with a high degree of frequency. Consider last season as one quick example. The Panthers shot nearly 9 per cent in the offensive end, but their opponents converted on just 6.7 per cent of their shots on net.

Now, you can argue that Yandle does things well offensively that contribute to higher shooting percentages – after all, Yandle’s calling card is that of a talented distributor of the puck, and he’s particularly useful on that front when it comes to power-play duties.

But these percentages are often fleeting, and in smaller samples of games don’t necessarily reflect what’s really happening on the ice. The save percentages in particular appear to be a significant outlier. We know that Panthers goaltenders finished the season 26th in stop rate, which would run counter to Yandle’s results. We also know that when Yandle was on the ice, teams were shooting from dangerous areas often (courtesy HockeyViz): 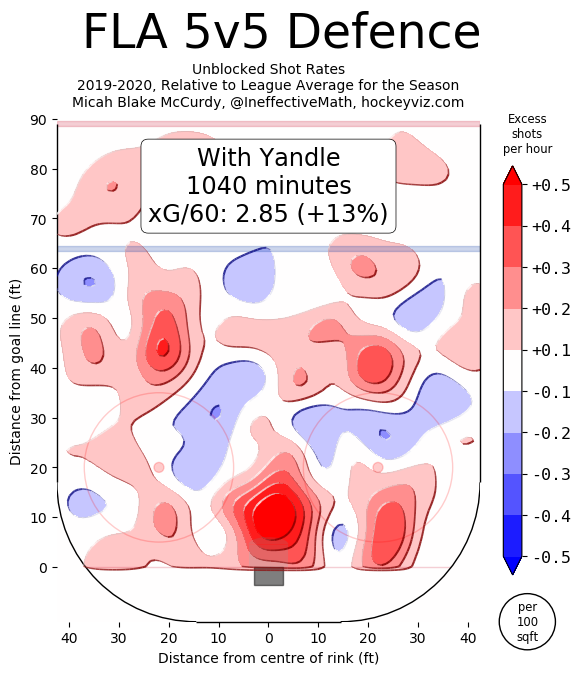 Off the ice, Yandle’s story is an economic one – a veteran offensive defenceman whose contract inhibits Florida’s ability to continue building their roster out over the next couple of seasons. On the ice, it’s a much more complex question.

On the plus side: Yandle is still able to ignite the offence from the blueline and create scoring opportunities in the offensive third, and that’s true at both even strength and on the power play. Over a season, he’s an automatic 40-plus points. On the minus side: Yandle’s never been a strong defensive player, his numbers in the last couple of seasons have been grim, and those numbers have been insulated by otherworldly goaltending behind him in stretches.

There is plenty to still like in Yandle’s game, but inquiring teams may be fearful of why he is on the market right now. You don’t need to squint to see that the Panthers seem concerned that last year appears to be a paper tiger of sorts – a player whose performance might be far worse than simple goal-based analysis would indicate.

The good news for Florida? Teams always need help on the blueline. Though rosters are jammed right now, the trade deadline is just three months away. The right fit, and likely with salary retained, could see the Boston native on the move to finish his career.