The Quiz: Who is the second best player in the NHL?

What happens when you put the league’s two biggest offensive gamebreakers in a restricted division ripe with poor defensive teams?

We have found out this season. One of the perks of the North Division – the seven-team Canadian grouping brought forth by COVID-19 border restrictions – is we have been able to watch Edmonton’s Connor McDavid and Toronto’s Auston Matthews filleting poor defences on a nightly basis. The beauty of a compressed, every-other-night sort of schedule means the league’s two biggest box office draws are always front and centre.

Something about this season has felt unique, though. In Edmonton, McDavid – and his running mate, former Hart Trophy winner Leon Draisaitl – have handled the lion’s share of the scoring burden for the Oilers.

The splits are quite incredible. As a starting point, consider that McDavid has been on the ice for a whopping 65 per cent of the team’s goals despite playing just 37 per cent of the minutes. That is an extraordinary differential, though it may say just as much about the team’s depth as it does about McDavid’s dominance.

Then turn to Toronto. Auston Matthews has 32 goals in 40 games. It’s almost an injustice that we can’t see how this season could play out over an 82-game stretch – his current prorated pace (65 goals per 82 games) is almost impossible to fathom, and would put him in Alexander Ovechkin 2007-08 territory. (Note: the 2007-09 seasons were ripe with power-play opportunities, which helped drive that total, but Ovechkin’s 43 even-strength goals alone that year were remarkable.)

The other thing that’s noticeable about McDavid and Matthews this season is the amount of daylight between them and their peers.

Let’s start with Matthews and his stranglehold on the goal-scoring lead. Right now, second place is owned by Mikko Rantanen of Colorado (26 goals). If we look at the top scorer by year and compare them on a percentage basis to the next four best goal scorers, we can see how much separation Matthews has created in such a small amount of time: 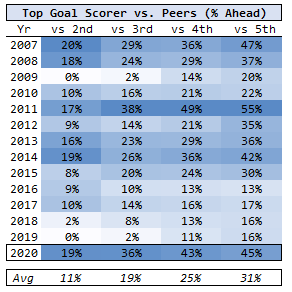 The goal-scoring race is usually much closer than it is this season. Matthews being up seven goals on second place already is significant. There really is only one other season that has looked similar to Matthews in 2020-21, and that’s the 2011-12 season.

Let’s compare those head-to-head for a moment:

Steven Stamkos won the goal-scoring race running away that season – his age-22 season still holds up as his best ever on the offensive end, and the most remarkable part is that 48 of those goals came at even strength. In many ways it gives you a frame of reference of what the 2020-21 season could have looked like over 82 games, assuming performance sustained itself and players stayed healthy.

Now consider McDavid – you see him third on the league’s goal-scoring leaderboard, no small feat considering the competition. He’s also racking up assists like it’s going out of style, a natural byproduct of being the world’s best playmaker.

Let’s look at how much daylight McDavid has created against his peers, this time focusing on points: 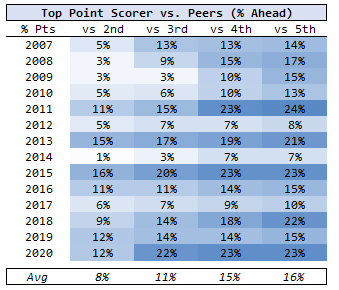 Again, there are pretty considerable gaps here, though you’ll notice that there is some degree of compression between first and second place in scoring this season. But second place is his own teammate (and regular linemate) Draisaitl, an elite finisher in his own right, but a player who also benefits from playing on McDavid’s hip every night. More to the point: There really isn’t a scoring race this season outside of the city of Edmonton.

So, which season looks similar? The 2015-16 season is our best bet. Let’s look at those head-to-head:

Patrick Kane’s 2015-16 season was a legendary one, with the Blackhawks winger ending the year as the league’s top scorer and most valuable player. The Blackhawks ultimately failed in their quest to defend the Stanley Cup they won in the year prior, but it wasn’t for a lack of effort on Kane’s part.

Kane demolished the competition in the scoring race, and in many ways it’s hard to imagine that players like Draisaitl or Matthews wouldn’t be able to tighten the gap up on McDavid this season a little bit with more runway.

But Kane also had significantly more help that season than McDavid has this year. Recall my earlier point about McDavid being on ice for 65 per cent of the Oilers goals this year? For Kane, it was 54 per cent in 2015-16.

I don’t need to tell you that McDavid and Matthews are the two best offensive players in the world. You already know that. But the gap between them and the rest of the field, broadly speaking, seems significant right now. And it’s not for a lack of talent behind them.