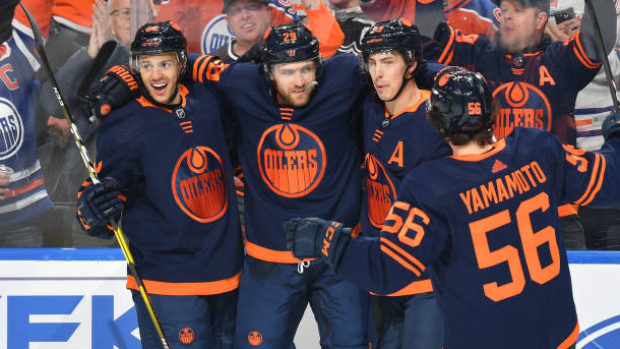 What makes a great NHL line?

It is a question that every hockey fan, head coach, and executive ponders.

Sometimes, it’s as simple as putting your two most talented wingers on the hips of your top centre and calling it a day; certainly, some of the best lines in the history of the league have been assembled in that manner.

But we know enough about the sport to know that’s not a one-size-fits-all answer. Some players create advantages through speed, others through size, others through their puck-handling and creativity. And no player is a perfect two-way forward, so coaching staffs must study how a given player’s skills and deficiencies complement his teammates.

Think of Pittsburgh’s Sidney Crosby as an example. If he has been the NHL’s Michael Jordan since he arrived in 2005-06, then Evgeni Malkin – a superstar in his own right – has been Scottie Pippen.

The idea of both stars on the ice at the same time is terrifying, and the results have been there. Since the 2007-08 season, Crosby and Malkin have played about 1,400 minutes together at 5-on-5 to a tune of a +34 goal differential, or +1.4 goals per 60 minutes. Those are incredible numbers.

Now, let’s do Sidney Crosby and his former winger Chris Kunitz. Over their careers, they were +120 in goal differential or +1.7 goals per 60 minutes together.

Was Kunitz a better player than Malkin? Hardly. There are likely a number of explanatory factors at play here.

As one quick example, Pittsburgh has been historically reluctant to pair their two superstars together unless they are chasing the game and in need of a goal, which means many of the minutes Crosby and Malkin have played together occurred when the Penguins were behind.

That said, ask any Penguins fan and they will tell you that the chemistry between Crosby and Kunitz was real and a big reason why Pittsburgh was able to sustain their dominance for an extended period.

So, how do we quantify the best lines in a given season and make historical comparisons accordingly? Net goal differential (per 60 minutes) makes the most sense, even if it’s susceptible to shooting or save percentage randomness – at the end of the day, you want to know how big of an advantage a line created for their teams.

If we put a minimum ice time restriction (I used 200 or more minutes) and subset to any line that was 3.0 goals better than their opponents for every 60 minutes of play at 5-on-5, we are left with a pretty small leaderboard.

Impressively, three of the lines are from the 2019-20 season: 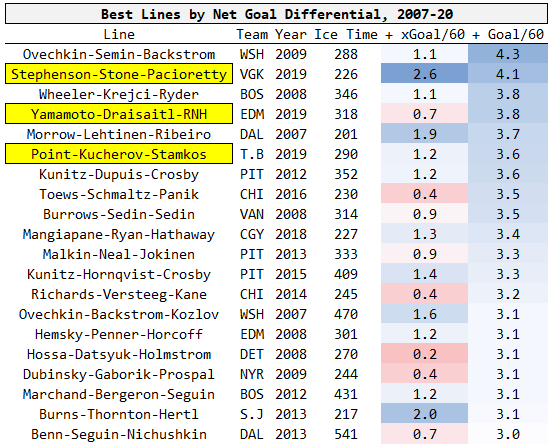 One of the common themes here is it’s hard to create a dominant line without at least one elite player – that’s why you only see players like the aforementioned Crosby and Washington’s Alexander Ovechkin appearing multiple times in different seasons.

Ovechkin was actually a part of the most dominant line we have seen in the past 12 seasons – playing with Alexander Semin and Nicklas Backstrom, the trio ran up a +21-goal differential in less than 300 minutes of ice time in 2008-09.

Nipping at their heels is a line established by the Vegas Golden Knights in the middle of this season after injuries depleted their forward ranks.

Depth forward Chandler Stephenson, acquired for a fifth-round pick in a mid-year trade with the Capitals, was thrust onto a line with Mark Stone and Max Pacioretty.

Stephenson’s ferocious forechecking and puck retrieval abilities seamlessly blended into Vegas’ new-found top line, one that already had the league’s premier two-way forward in Stone and an absolute sniper in Pacioretty. Three completely different players, one exceptional line. (Note: this line was broken up as players returned to health, with William Karlsson eventually taking Stephenson’s role.)

Two other great lines from this season aren’t far behind. Perhaps no player has earned more recognition, and rightfully so, than Edmonton’s Leon Draisaitl. His 43 goals and 110 points lead the league, and he will get serious Hart Trophy consideration when the award voting goes out.

He also answered the most important question facing the Oilers this season. Fears surrounding the team’s inability to produce offence away from Connor McDavid’s line have existed since McDavid entered the league, and far too many players have been productive on McDavid’s wing and unproductive when moved away.

Draisaitl not only drove the most impressive scoring rates of the season, he did so with the likes of Kailer Yamamoto and Ryan Nugent-Hopkins – two talented forwards in their own right, but obviously a step down from the likes of McDavid.

Curiously, both McDavid and Draisaitl had positive goal differentials away from one another, but negative when paired together.

Tampa Bay’s embarrassment of riches in their forward group created another Herculean group, this time with Brayden Point, Nikita Kucherov, and Steven Stamkos.

Although they weren’t getting the same defensive play and goaltending as their counterparts in Vegas and Edmonton, they were able to offset that by generating the best offensive scoring rates in the league. Their 6.1 goals scored per 60 minutes was second only to Ovechkin and company during the 2009-10 season, which is remarkable.

I would be remiss to not note other lines whose rate goal differentials may have been tampered a bit by the sheer amount of time played together. Boston’s trio of Brad Marchand, David Pastrnak and Patrice Bergeron were two goals better than their opponents per 60 with more than 600 minutes of ice time together, as one notable example.

It would have been fascinating to see if any of these lines could have chased down the Ovechkin line from 10 years ago, but unfortunately, that doesn’t seem possible.

Let’s hope we get to see these lines play again in the postseason.