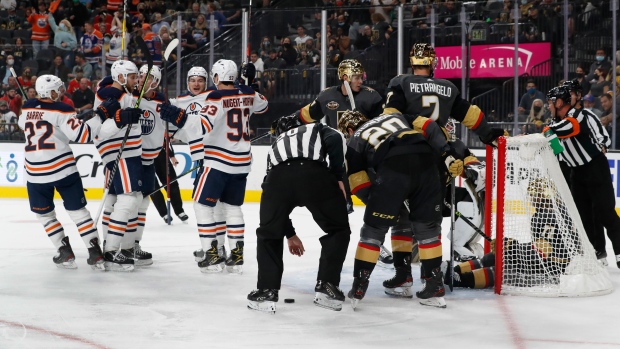 There have been any number of impressive performances over the first two weeks of the National Hockey League season, but none has been more notable than the Edmonton Oilers’ power play, which continues to look like one of the most dynamic units in recent league history.

Edmonton’s hot start to the regular season (combined with an ugly injury situation down in Vegas) already has us asking questions about the Pacific Division, and whether Dave Tippett’s team can finish the regular season in pole position.

It hasn’t all been perfect – the Oilers are just one goal ahead of their opponents at even strength, some of that the result of a blueline that is still a work in progress.

But the power play is something to behold. It seems cruel that a team can be given a man advantage and simultaneously deploy both Connor McDavid and Leon Draisaitl against undermanned opponents. This power play has been rocking for years but somehow looks even more dynamic this season.

The McDavid-Draisaitl era has been about continuous improvement on the power play. It wasn’t long ago (2017-18) the Oilers were icing a league average power play, but in more recent years (2019-20) the aggregate of both Oilers’ power-play units have been the most effective scoring groups in the league.

And this year? Well, the usual small sample size caveats apply. But the numbers speak for themselves. Not only do the Oilers have eight power-play markers in 19 minutes up a man, expected goal rates have also gone nuclear, the byproduct of generating incredible volumes of shots from dangerous areas of the ice: 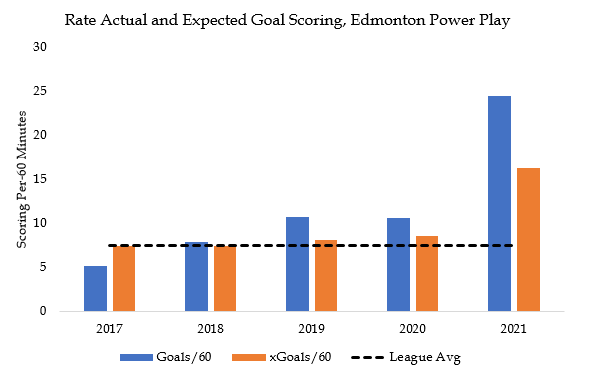 A team converting on 28 per cent of shots on the power play should be terrifying for every opposing goaltender in the league. What’s even scarier is that I’m not sure there is a serious regression awaiting this group.

The Oilers scored on nearly 19 per cent of their shots over the 2019-20 season, which is remarkable. And again, much of this is sustainable because of how easy a time the Oilers have driving offence into the low slot and between the circles. Playmakers like McDavid and Draisaitl, gifted as they are shooting the puck, are just as effective at forcing defences and goaltenders to chase the play and move themselves out of position.

Consider what opposing defences and goaltenders are seeing each time they take a penalty against Edmonton. As HockeyViz so beautifully illustrates, there have been waves of scoring chances from the areas where shooting percentages skyrocket: 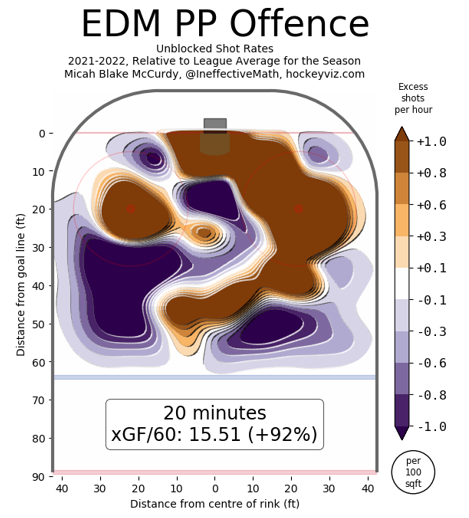 It’s important to note that although the core parts of both Edmonton power-play units have remained, the supporting pieces have changed. Forward Zach Hyman has been pushed into first power-play minutes, as expected, and Jesse Puljujarvi is similarly earning a bigger opportunity: 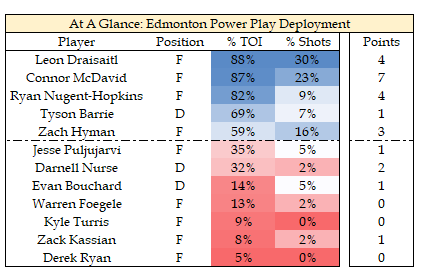 At some point this group will cool off, but betting against them being anything other than the league’s best unit by year end – for the third consecutive season – seems like a losing ticket.

I pity the Pacific Division goaltenders who are going to have to deal with this group for the next six months.