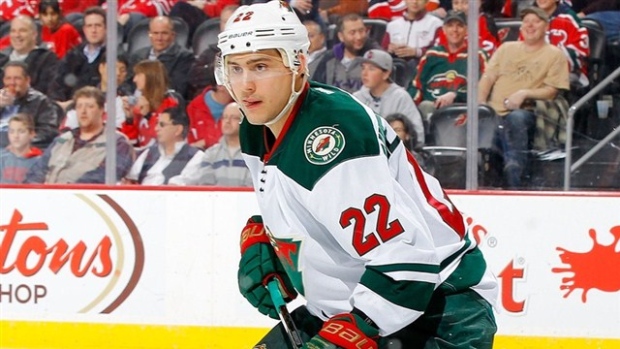 By and large, the hockey analytics community fully comprehends the importance of puck possession at even-strength. It’s a point no longer in dispute.

However, there are still tangentially-related questions that pop up now and again about puck possession data. One of the most popular concerns sample size determination, and how large of a sample we ultimately need in order to start feeling confident about a team’s ability (or inability) to control play at 5-on-5.

As is the case with most questions posed to the hockey analytics community, people have researched the issue. Micah Blake McCurdy recently looked into this, and graphed out the coefficient of determination – or, the percent of variance explained – for teams at every game interval, comparing current performance via Score-Adjusted Fenwick) to end-of-year Score-Adjusted Fenwick%.

Score-Adjusted Fenwick% is a score-weighted puck-possession proxy that takes into consideration all goals, shots on goal, and missed shots at 5-on-5. 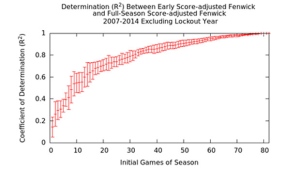 You will notice that mid-November is a pretty telling time – we are starting to see teams approaching the twenty-game mark, and as such, the chance that a team with great (or poor) puck possession numbers is doing it through chance or random variance is dwindling.

Consequently, the chance for a team to deviate in the future continues to diminish.

This is an important takeaway, because we can really start to look at a number of things – including deviations in a team’s current performance to last year’s performance. First, let’s look at five of the biggest improvers via Score-Adjusted Fenwick%:

These five teams have experienced large 5-on-5 improvement from last year to this year. Four of the five teams – excluding Edmonton – are exhibiting what we would consider ‘elite’ territorial control. Edmonton’s improvement is from a dreadful team of one year ago, to a decent team in 2014-2015.

The one commonality the five teams share away from the obvious improvement is that it seems that player growth and development has led to a wave of competent depth that wears on the opposition.

Take, for one example, the Minnesota Wild. Head coach Mike Yeo is afforded the luxury of youngsters Mikael Granlund, Charlie Coyle, Erik Haula, Jason Zucker, and Nino Niederreiter – five forwards under the age of 23, all of whom can be sprinkled into the team’s top nine around skilled veteran talent. Defensively, they have Jonas Brodin and Mathew Dumba. That’s seven young players, all on cap-friendly deals, all towing individual Corsi% north of 55%. It’s an unbelievable arsenal, and really what’s triggering Minnesota’s progress.

Other teams are using acquired veterans to supplement young players in need of insulation. Edmonton and Pittsburgh certainly fit the description here. Edmonton’s forward acquisitions – including Benoit Pouliot and Teddy Purcell – have been plus-Corsi% players for the Oilers this year. Pittsburgh’s  most notable add was a veteran winger in Patric Hornqvist, who at 60% Corsi% ranks 2nd in the league among regular forwards.

In Washington’s case, it might be a combination of factors – including the addition of head coach Barry Trotz. There’s been a lot of debate about whether Trotz is the right fit for star winger Alex Ovechkin, or whether Ovechkin is the right kind of talent for Trotz. I think the answer is both. The horse needs a jockey, and the jockey needs a horse.

On the other end of the spectrum, we have five teams who have seen a huge drop-off in 5-on-5 control.

This group is a bit more interesting than the first group, in that there are teams of wildly varying competency here. Los Angeles and San Jose (and even to some extent, New Jersey) are still pulling decent possession numbers. But, these were three of the best 5-on-5 teams from one year ago.

Los Angeles’ drop is particularly fascinating. For a team’s that’s mastered the art of dump-and-chase and defending the neutral zone like maniacs, there’s – I think – a tiny bit of reason to be concerned with this season’s performance. Historically, Los Angeles has been a great possession team in the regular season, but they’ve never been particularly great at amassing points in the standings.

This year, the possession numbers have hit break-even for only the second-time in the last three-plus seasons. 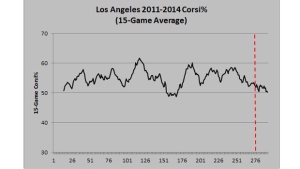 For Los Angeles, I think this is an issue to troubleshoot before it’s too late. Not surprisingly, I think a lot of it is tied up into what happens with this team when the Kings’ top players are off of the ice.

To the Kings’ credit, I think they’re mixing/matching to figure out what’s exactly ailing the team. Darryl Sutter’s recently dropped the struggling Dustin Brown to a line centered by Jarret Stoll; he’s bumped Marian Gaborik and Jeff Carter to the Anze Kopitar line, and he’s put the two impressive youngsters – Tanner Pearson and Tyler Toffoli – on Mike Richards’ wing to help the declining center. Will it work? Will it stick? Only time will tell. But, it’s a start.

Whereas Los Angeles, San Jose, and New Jersey have unexpectedly jumped into the pool of mediocrity, Ottawa and Buffalo are officially playing with fire. The Senators haven’t been buried in the standings just yet, but that’s primarily due to Craig Anderson and Robin Lehner stopping a likely-unsustainable 94% of shots at even-strength. And Buffalo? As we have beyond exhausted to this point, they are well on their way to an historically poor season.

At the very least, these numbers create opportunity for fans to win the friendly wager with friends and family. The Capitals and Islanders seem like fantastic bets to continue playing well and moving up in the standings. Ottawa? A great team to bet against until proven otherwise.