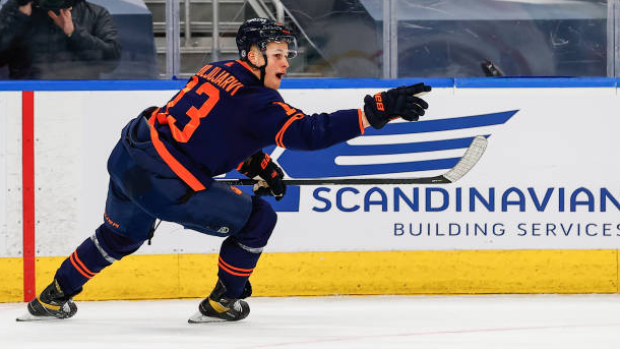 When Jesse Puljujarvi left the Edmonton Oilers two years ago for Karpat of SM-liiga, his future was as clear as mud. Now? He’s a key piece of an organization that may have the best shot at dethroning the Toronto Maple Leafs in the North Division.

Puljujarvi’s exodus from the Edmonton Oilers left a bit to be desired. After two underwhelming offensive seasons, the Finnish winger became a frequent target of criticism both inside and outside the organization. Things were so heated between Puljujarvi and the Oilers that a trade of the former fourth-overall pick (2016) seemed likely at one point.

But time has a funny way of healing. With Puljujarvi developing in Europe, the Oilers went through a significant regime change, including the hiring of general manager Ken Holland and head coach Dave Tippett.

Perhaps Puljujarvi did need more time before making the jump to the NHL; perhaps the Oilers were also in dire need of a change at the top after the organization was routinely under fire for mishandling younger players. Those two things do not need to be mutually exclusive.

But here we are in Puljujarvi’s age-22 season, and he’s putting together a quality rebound year. The offensive numbers aren’t blowing anyone away, but there are signs of progress. Puljujarvi is playing at a 38-point pace over an 82-game season, and he’s doing it with exceptionally little power-play time.

But it’s perhaps his defensive impact, particularly at even strength, that shows the most important sign of growth.

Puljujarvi has spent most of this season playing alongside superstar Connor McDavid and Ryan Nugent-Hopkins, the third-best offensive option on the line. But Puljujarvi – and Nugent-Hopkins, a two-way monster – have given McDavid something back, and that’s defensive competency on the wings.

Consider the shot profile of opponents when Puljujarvi is on the ice, courtesy HockeyViz, and notice how Puljujarvi’s line continues to be successful at pushing attackers to the perimeter and to the blueline, where harmless shots are turned away by Mike Smith and Mikko Koskinen: 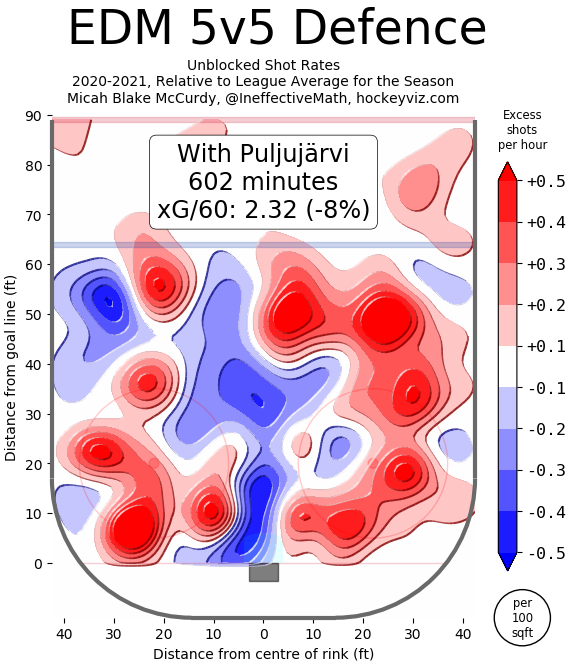 This is not an insignificant development, particularly with how many minutes Puljujarvi has played with McDavid, who trades in an ultra-fast pace and indefatigable attacking style for occasionally high volumes of pressure in the defensive zone.

You never – and I triple emphasize the word never here – want to slow down the burners of McDavid, who creates offence at a superhuman rate. But McDavid’s offensive totals have always dwarfed what he’s added in terms of net goals, in large part because the Oilers give some of that goodness away defensively.

That’s changed this year, and it may be one of the biggest reasons why the Oilers are so well-positioned in the division right now. McDavid’s line is +22 in even-strength goals this year; juxtapose that against 2018-19 (+3) and 2019-20 (+2) and you start to realize the impact of the defensive bonuses from that line this year.

Bringing it back to Puljujarvi, there’s evidence he is a positive contributor to those defensive gains. When he’s playing on the McDavid line, their expected goal rates are considerably lower than in years past. When Puljujarvi is moved onto another line away from McDavid, those expected goal rates drop even further: 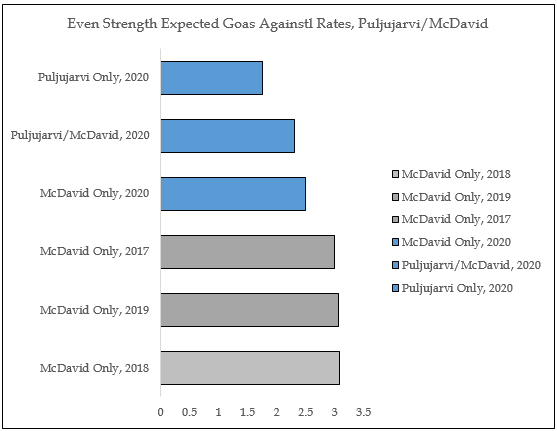 The jury is still very much out on what Puljujarvi’s ceiling is, especially in light of the names sandwiching him within his draft class – Auston Matthews, Patrik Laine, Pierre-Luc Dubois, Matthew Tkachuk, and Clayton Keller are already outstanding players and big offensive contributors, while Puljujarvi has lagged in that department.

But development isn’t linear for every prospect, and the value of a first-round pick isn’t wholly adjudicated on whether or not he is an incredible goal scorer.

If Puljujarvi can further develop into a credible two-way winger with the defensive touch we are seeing this season, he will stick in this league for a very long time.