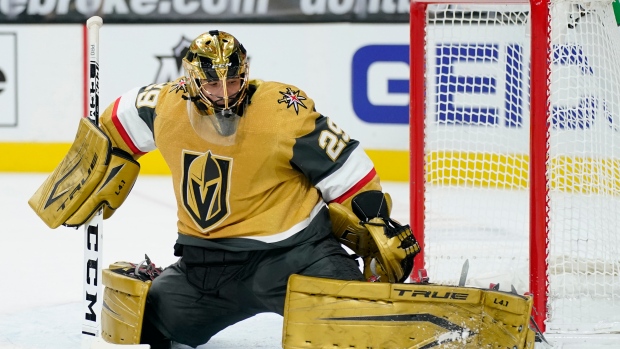 Are we in the midst of a third Marc-Andre Fleury renaissance?

There are few stories more intriguing around the National Hockey League than what’s going on in the Vegas Golden Knights’ crease.

Fleury, the team’s first face of the franchise and the primary reason why they challenged for a Stanley Cup in their inaugural season, has seen his numbers wane over the past couple of seasons. It prompted the Golden Knights front office to make an aggressive move last season, acquiring talented Swedish goaltender Robin Lehner. By the end of the year, Lehner had pushed the three-time Stanley Cup winner out of the starting position and firmly onto the trade block.

In a perfect and less cap restrictive world, a platoon of Fleury and Lehner would have been as desirable as any goaltending unit in the league. But the salaries of both – and Vegas’ desire to add talent in preparation for another championship run – pushed Fleury to the fringes of the organizational plan. If not for a flat salary cap due to the COVID-19 pandemic, it’s likely the veteran goalie would have been moved.

But those trades never materialized. And somehow, it’s worked out in Vegas’ favour.

When Lehner went down with an upper-body injury on Feb. 9, the keys to the net were handed back to the 36-year-old Fleury. So far this season, he looks every bit the part of the Vezina Trophy front-runner.

In 12 games this season, Fleury has stopped a whopping 94.1 per cent of shots, which is comfortably first in the National Hockey League. He does get the benefit of playing behind a well-structured defensive unit that limits the amount of rubber he faces, but the Golden Knights are frequently left exposed to dangerous rush and counterattacking opportunities with how aggressive they play in the offensive zone.

The blistering save percentage and Fleury’s ability to thwart the handful of golden chances teams are piling up the wins for the Golden Knights. His play so far this season has few comparables: 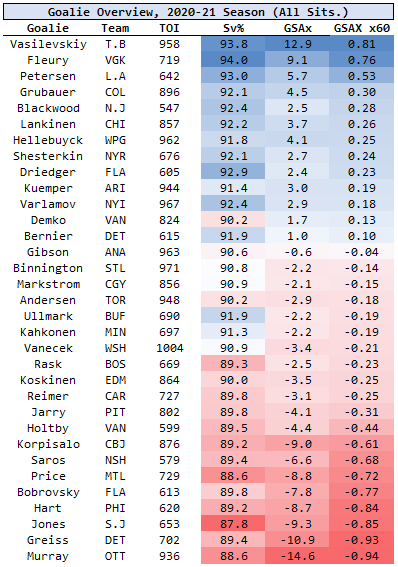 The Goals Saved Above Expectation numbers provided by Evolving Hockey take into account the shot profile each goaltender is facing, and his ability to beat the expected save percentages over that sample of play.

It helps us better understand how to differentiate between a goaltender like the New York Islanders’ Semyon Varlamov – a talented goaltender behind an incredibly well-structured defensive team – from someone like Vancouver’s Thatcher Demko, who is drinking water from a fire hose on most nights.

The fact that Fleury has been good enough to steal more than nine goals already behind a reasonably strong defensive team is an encouraging corroborating data point on his save percentage. And it’s not hard to find where those goals have aggregated – marquee saves, like those on Anaheim’s Isac Lundestrom or Colorado’s Nazem Kadri, have become nightly occurrences this season.

It also brings up an interesting story to track over the rest of the season. Though goaltenders have shown an ability to maintain their playing primes longer than their skater counterparts, it’s quite rare for a goalie of Fleury’s age to win the illustrious award this late into a career. Johnny Bower and Jacques Plante both won the trophy more than 50 years ago at the age of 40). But in the modern era, that’s been unachievable. Only two goaltenders have won it at Fleury’s age – Dominik Hasek in 2000-01, and Tim Thomas in 2010-11. 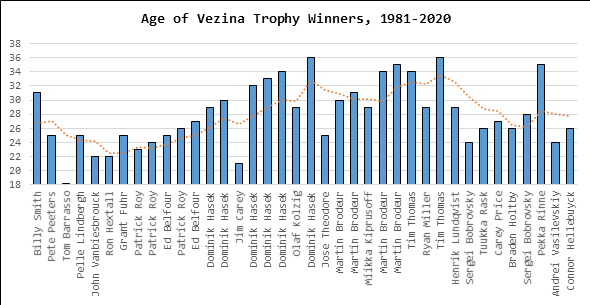 Perhaps the most fascinating part of this Fleury saga is that it is far from over. Despite his stellar play, Lehner is inching closer to a return, and no coaching staff with two quality goaltenders and a compressed schedule is going to consider anything other than a playing platoon. Balancing workloads for both Fleury and Lehner down the stretch should pay dividends for head coach Peter DeBoer, but it may give someone like Andrei Vasilevskiy – backed up by Curtis McElhinney – a slight edge in the Vezina race.

There is also the salary cap component to consider. Fleury’s bloated contract scared cap-strapped teams away this off-season, but so too did last year’s play. If he can sustain even half of this calibre of play, he suddenly becomes an interesting trade piece again – his $7-million-dollar cap hit expires in 2021-22, and teams who believe they are a goaltender away from competing next season may inquire more aggressively.

For now? I think Vegas is quite happy with how things played out.