Talking to the Ottawa Sun this weekend, Senators owner Eugene Melnyk discussed his short-term expectations and long-term plans for a return to competitiveness.

There was a flurry of fascinating nuggets in the interview, but the underlying theme was anticipation that the roster – fuelled by an impressive collection of prospects – had turned a corner.

Some of those prospects have already started to make the jump to the NHL level. This line of thinking is consistent with the organizational messaging from the beginning of the rebuild: a return to competitiveness by this season, and a five-year run of unparalleled success starting in 2021.

The organization and fan base have reason to be optimistic about where the roster is heading. We really haven’t seen a rebuild of this scale in quite some time, and the sheer volume of prospects coming through the system will strengthen Ottawa’s position down the road.

With that said, I wonder if this rebuild is going to take a fair bit longer than the publicized expectations. The upcoming season was intended to serve as the transitional year between the roster teardown years and, presumably, recurrent playoff appearances. That would suggest Ottawa – who finished last season with a pro-rated 72 points and -60 goal differential – needs to considerably improve this season.

Adding forward Evgenii Dadonov (replacing J.G. Pageau) and goaltender Matt Murray (replacing Craig Anderson) will help, but is it enough? Especially in a proposed All-Canadian division? I think the answer is no. The primary concern is that Ottawa is, by and large, running it back with last year’s lineup, betting heavily that their young players will take another step in 2020-21.

That’s a sensible bet for some players – Brady Tkachuk already looks like a bona fide top-six forward, for one obvious example. But a number of young Ottawa skaters struggled last season. If we compare each player’s contributions to the team last season, you can see just how many players are cutting near or below what we would consider replacement level.

(For the sake of this analysis, we will use the regression-based Goals Above Replacement model at Evolving Hockey.) 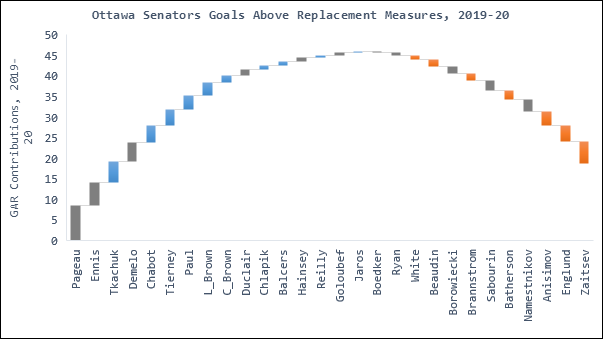 For context, an average NHL forward last season was about five goals better than a replacement player; an average defenceman was about three goals better than a replacement player. The only returning Ottawa skaters who would have beaten that baseline at their respective position include the aforementioned Tkachuk and defensive sensation Thomas Chabot – the two premier faces of this rebuild, and two players who have solidified long-term roles already at the NHL level.

Said another way: Ottawa lost more players who beat this baseline (Pageau, Tyler Ennis, Dylan DeMelo) than are returning next season. Worse yet, four of the five new names to the skater group in Austin Watson, Alex Galchenyuk, Josh Brown, and Erik Gudbranson were already grading at or below replacement level before coming to Ottawa.

For comparison’s sake, the Toronto Maple Leafs had 11 skaters beat player baselines last season. The Montreal Canadiens had 13, though there were some considerable negatives at the bottom of their lineup. The Buffalo Sabres had nine. So this is a steep, uphill climb.

There are useful players further down the Senators lineup, which will help alleviate depth concerns. Tierney and Nick Paul proved effective in middle-six roles last season, and Logan Brown (22), Filip Chlapik (23), Rudolfs Balcers (23), Josh Norris (21), Erik Brannstrom (21), and Drake Batherson (22) all saw time last season. This rebuild hinges on some of these players developing into top-six or top-four names in relatively short order; it is worth keeping in mind that this player pool sits in similar age brackets to the likes of Tkachuk (21) and Chabot (23), who are more than a couple of steps ahead.

There is one other factor beyond something as fluid as player development, and that’s what Ottawa did in the crease. The single biggest thing that could change the fortune of Ottawa’s future straightaway would be Murray – acquired from the Pittsburgh Penguins in the off-season – returning to form and taking control of the Senators’ crease.

Murray had a disastrous 2019-20, stopping just 89.9 per cent of shots faced, but has an otherwise encouraging track record and should prove an upgrade over the departed Anderson. On the other hand, this was the defence that Anderson – who stopped 90.2 per cent of shots last season – played behind, heat maps courtesy HockeyViz: 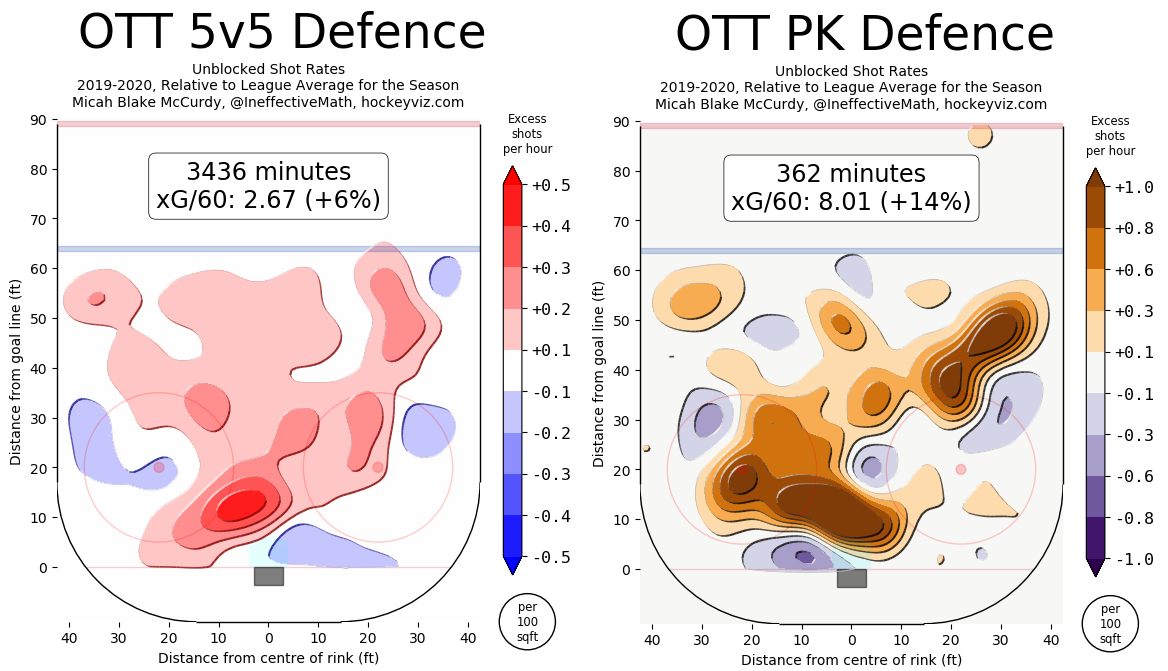 In the nation’s capital, the sheer volume of prospects – some of which will invariably pan out for the Senators organization – is reason alone to be excited. But for as much excitement as that should generate longer-term, the season ahead could prove challenging.

Absent a prospect development explosion or a Murray goaltending heater for the ages, it’s hard to see where this team improved enough to jump 20 or more standings points. Productive players who left were replaced with equally or less-productive players from the market, and they are being thrust into a division where the other six teams averaged a +5 goal differential over the course of last season.

Next season will be an uphill fight for D.J. Smith’s team.