The hockey off-season is coming to a close. Training camps and preseason games are right around the corner, and for most teams, this summer’s roster-building efforts are complete.

But every September we see a couple of material late-summer signings – players who may have been squeezed out of the free agency bidding war due to age, fitness or salary compression.

The NHL’s current “Best Available” list would have been an all-star-calibre lineup in 2010. Not so much anymore. Now teams must weigh the value of bringing in a veteran who may have a little game left in the tank against unusually tight salary cap situations and the fact that the inevitable one-way deal will lock up a roster spot for a full season or more.

Depending on where you draw the line, there are about 21 skaters of interest remaining in free agency. It’s an interesting position split, too. The talent pool for forwards, and in particular bottom-six forwards, is rich and gives front offices a bit of leverage and flexibility as they round out their rosters. Defensive options, on the other hand, are few and far between.

Let’s look at this group of players, bringing in their multi-year production levels (we will use Goals Above Replacement as our measure of contribution here) as well as their usage during last year’s truncated season.

We will start with remaining defencemen:

To be blunt, there are few good options here. Zdeno Chara and Braydon Coburn are at the very tail end of their respective careers and will be picky when choosing a team to sign with, assuming they want to play another full season. Sami Vatanen has struggled mightily with health. Oher players listed here – like Erik Gustafsson and Erik Gudbranson – were already struggling to crack NHL lineups.

Michael Stone and Ben Hutton offer interesting one or two-year options for teams looking to polish up their defensive depth. Stone fell out of favour on a Calgary blueline that had plenty of depth options, but in 21 games last season he looked a more comfortable version of himself, playing a faster-pace game alongside common partner Juuso Valimaki.

The Stone/Valimaki pairing outshot opponents 246-215 (53.3 per cent) during that 21-game stretch, with expected goals (54.8 per cent) falling in-line. Perhaps most notably: Stone’s pairing was effective protecting the net against weaker competition, something we didn’t see in prior years (via HockeyViz): 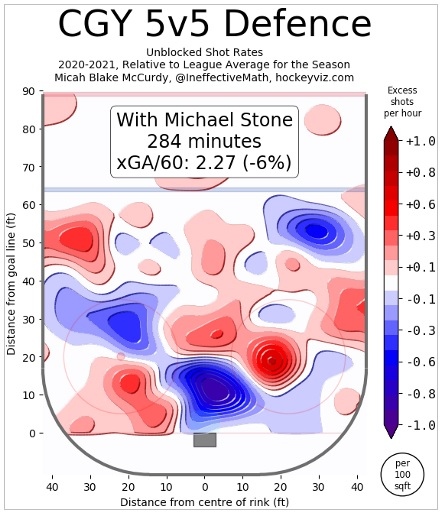 Hutton, meanwhile, is an interesting buy-low candidate. After a great 2019-20 season in Los Angeles (primarily playing with Matt Roy on a depth pairing and behind the always-reliable Anze Kopitar line), Hutton’s play cratered.

Some of this we can surely attribute to the lack of talent in the Anaheim lineup last season; I suspect part of the reason Toronto was willing to add him as an insurance policy for a fifth-round pick last trade deadline was for this very reason.

Hutton isn’t much of a puck-mover, but as a third-pairing and penalty-killing option, you could do a lot worse.

Moving on to the forwards: 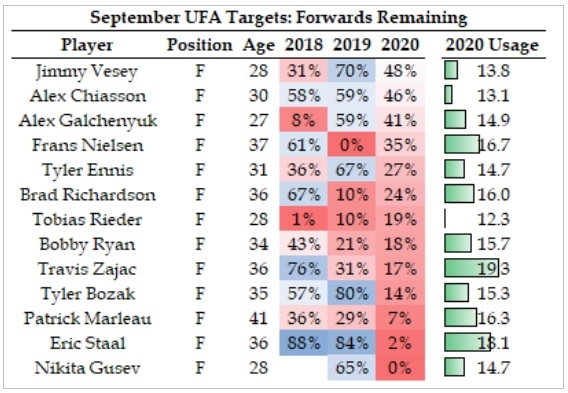 Like our defensive crop of players, you don’t need to look hard to find warts on what’s left in the forward groups in free agency.

The good news is some of these players can still fit within an organization’s roster-building plans irrespective of how competitive they are at this moment – players like Nikita Gusev (29), Jimmy Vesey (28), and Alex Galchenyuk (27) have plenty of gas left in the tank.

I also think that’s your top three if you are looking at best remaining forwards. All three have a track record of playing competitively over a three-year horizon, and each player offers something a little bit unique.

We’ll start with Vesey. Five seasons ago, there was a genuine bidding war for his services, and the early parts of his career were very encouraging.

In Vesey’s first three seasons, he was averaging 17 goals and 30 points a season in very limited minutes. The scoring wasn’t coming from beautiful set plays and one-timers from the circles, but rather through frenetic forechecking and forcing of turnovers that made Vesey tough to play against.

But the individual scoring broke down after his stint on Broadway. Stops in Buffalo, Toronto, and Vancouver were unproductive, and he’s been reduced to more of a checking-line forward at even strength, but one versatile enough to pick up added minutes on the power play and penalty kill.

The most intriguing player of the group is surely Gusev, if only because our understanding of the value he brings is still strained.

After incredible seasons in the KHL and a strong rookie year with New Jersey, Gusev was a disaster in his sophomore season, earning routine healthy scratches and a buyout from the Devils before signing with the Florida Panthers.

Concerns about puck management and scoring chance creation remain, and a shot profile of his second season in New Jersey tells you everything you need to know about why the Devils were so concerned about his offensive contributions: 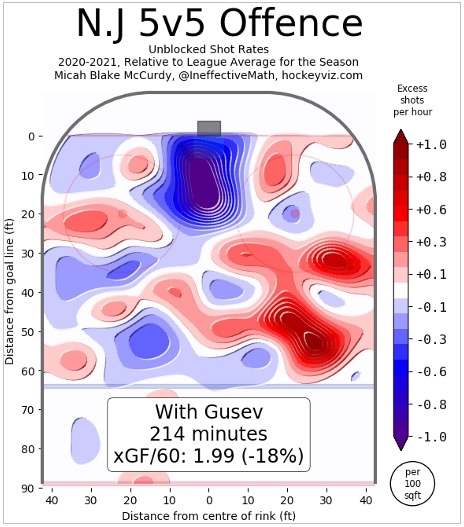 That brings us to Galchenyuk. Like Vesey and Gusev, Galchenyuk also saw heightened offensive production early in his career, only to see that taper off emphatically with Arizona and Pittsburgh.

But I thought last season’s renaissance with Toronto – Galchenyuk had 12 points in 26 games during the regular season and added four points during their first-round series against Montreal – was precisely what Galchenyuk needed to stick around at the NHL level.

The outstanding question was whether Galchenyuk’s offensive zone playmaking, a core strength of his game, could manifest itself again with better weapons around him. I think he answered that affirmatively.

If you are a team still looking to add foundational players at this point, you are in trouble. But if you are adding at the margins – perhaps a playoff contender with a few million in cap space – there are certainly options at both position groups, though the forwards have a bit more to offer.

My guess is we see a number of these players sign deals as we move closer to the opening of camp.