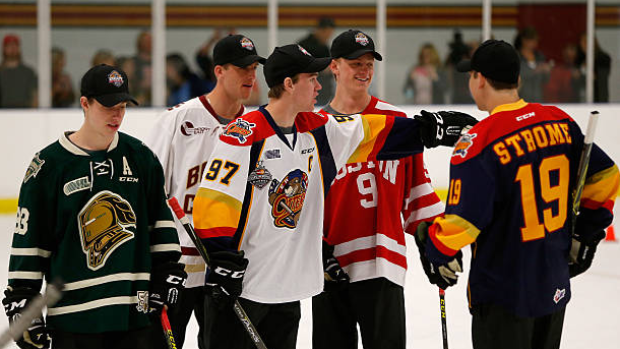 Edmonton’s Connor McDavid, the first-overall pick in the 2015 NHL Draft, emerged long ago as the best hockey player on Planet Earth. His 15 goals and 28 assists to start the 2020-21 season have him in pole position to win his third Art Ross Trophy.

McDavid is so otherworldly that we might forget the strength of the rest of his draft class. The entire build up to that draft was about securing the top pick – the team lucky enough to win the draft lottery would immediately see the fate of the franchise turned around. After McDavid, the usual group of higher-end prospects were vying for the attention of interested organizations.

That’s been especially true this season. Through Saturday’s games, players selected in the 2015 NHL Draft have tallied 221 goals and counting. McDavid’s 15 goals are at the top of the leaderboard, but Brock Boeser (13), Mikko Rantanen (12), Kyle Connor (11), and Mitch Marner (10) are also in double digits.

And that’s just scratching the surface. Look how many skaters from that draft class are individually scoring goals at higher rates than the league average this season. 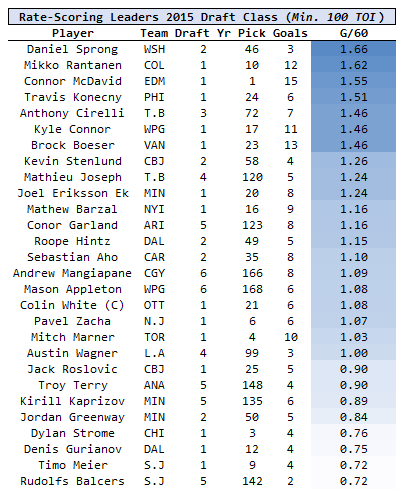 The interesting thing about the 2015 class is that it has strength at the top and strength at the bottom. It’s impossible to not notice that 14 first-round selections from that year are beating league average scoring expectations in 2020-21, and many of those players are in the top five per cent of scoring league wide.

But it would be a mistake to think this is just about a strong first round.

Tampa Bay’s Anthony Cirelli (third round, 72nd overall), Arizona’s Conor Garland (fifth round, 123rd overall), and Carolina’s Sebastian Aho (second round, 35th overall) were all taken outside of the first round. Minnesota playmaking sensation Kirill Kaprizov (fifth round, 135th overall)– who spent six years in the KHL prior to making the leap to the NHL this season – appears to be a Calder Trophy front-runner. And even deep-round picks, like Calgary’s Andrew Mangiapane (sixth round, 166th overall) and Winnipeg’s Mason Appleton (sixth round, 168th overall), have filled the net with regularity this year.

Now do the quick math. This draft class is six years removed from junior or developmental leagues, which means they’re all about 23 to 24 years of age and in their playing primes. We should be expecting this group to be peaking right about now, and they are. But what’s particularly noteworthy is that they are beating the numbers of other draft classes with similar years of experience.

If we compare the contributions of each draft class relative to the year they played in, we see that – at least as it pertains to scoring and offensive contribution – there is a five-year range we would consider peak performance, somewhere between the ages of 23 and 27:

One of the first things that jumps out is that the 2015 draft class has accelerated the normal developmental timeline by a full year.

Why do I think the latter is true? If we compare the 2015 class at their respective ages against all of the other draft classes in the modern era (2007-20), we see that it has beaten expectations annually.

Not only did this class appear to peak much earlier than others, but it’s been able to sustain that advantage over classes as its members progressed into their sixth playing season: 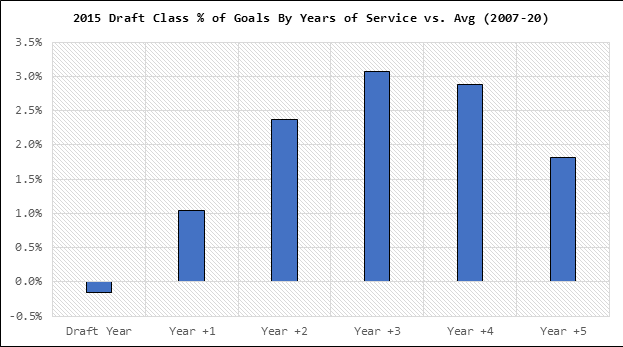 Can you imagine what this will look like when Buffalo Sabres forward Jack Eichel – the second-overall pick in 2015 who is in a ghastly scoring slump to start this season – invariably rebounds?

A draft we thought would be strong at the top going into it has lived up to the hype. But it’s been the rest of the class – often overlooked in what was deemed a top-heavy draft year – that’s started to deliver in a big way, and the class as a whole comes off looking like one of the stronger years in recent history.