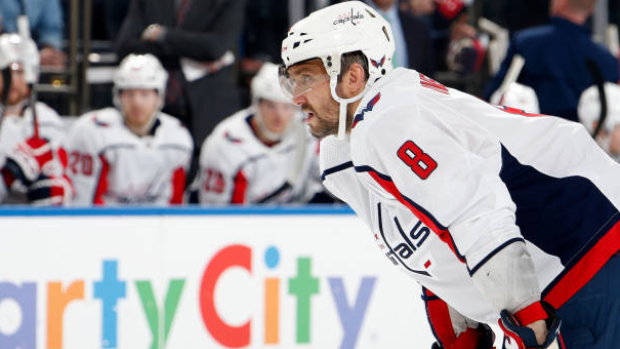 The final score was Columbus 3, Washington 0.

It was a rather unspectacular mid-December game between Metropolitan Division foes, with the Blue Jackets coming out on top, thanks to a pair of goals from Oliver Bjorkstrand and a marker from Eric Robinson. Columbus, as they had done for much of the year before the regular season was paused, was brutally effective defensively and able to slow a Washington team that was second in league scoring (3.4 goals per game).

But the last five minutes of the game were fascinating. Alexander Ovechkin – in the midst of chasing down his ninth Rocket Richard Trophy – was put over the boards by head coach Todd Reirden with just over five minutes remaining in the game and the Capitals down by three. The Washington rally never manifested, and when the final whistle blew, Ovechkin and his teammates skated off the ice with a loss.

In between, the Russian superstar managed to log a five-minute and 14-second shift – the longest of the regular season.

The NHL has seen shift lengths drop over the years as coaches become more aware of how performance can degrade as shift length increases.

Former Toronto Maple Leafs head coach Mike Babcock has been notoriously disciplined about keeping shifts right around the 40-second mark, and although most teams are more liberal with shift length in special-teams scenarios, the strategy of keeping players fresh and avoiding performance slips through tired legs at the end of shifts is a priority for every team.

The Capitals are one of the few teams that, in certain spots, will be strategically more liberal with their shift lengths, depending on the circumstances.

Part of that is player empowerment; the team knows that a player like Ovechkin is smart enough to know how to conserve energy during longer shifts, and they also know he is by far the best weapon the team has when it comes to scoring goals.

So in scenarios where a team is down a bunch of goals and win probabilities are quite small, the coaching staff has two options: punt on the game and keep players fresh for their next opponent, or try and rally late.

In this game, Reirden chose the latter. And it wasn’t just Ovechkin taking an utterly monstrous shift. Check out John Carlson and Nicklas Backstrom (via ShiftChart):

A five-minute shift is more or less impossible at the NHL level without significant energy conservation and some brief stoppages along the way, and that’s what happened here.

The skeptic might point out that it mattered not – the Capitals didn’t score, Columbus prevailed, and both teams moved on to their next game. But the pragmatist might point out that one of the two best goal scorers in the history of the game was able to effectively play an extended shift, giving Washington the best chance, however small, to launch a comeback. (Despite a dominant Columbus defensive effort, Ovechkin still ended the game with 13 shot attempts. The Capitals outshot the Blue Jackets 36 to seven in all situations with Ovechkin on the ice, too.)

If you look at some of the longest shifts the NHL over this season, you won’t be surprised two things: Ovechkin makes multiple appearances, as do a number of other Capitals skaters. (Again, keep in mind that the shift length clock does not stop if there is a brief stoppage of play, which can provide a quick break to players to conserve energy.) 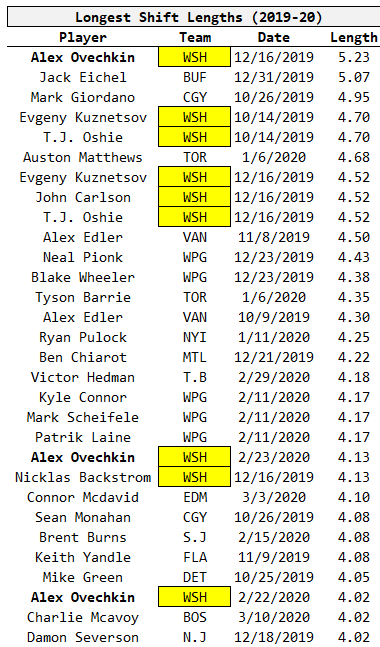 What I find most interesting is not just how many Washington skaters are on this list, but how it spans four different games. The Capitals clearly will pick spots – relative to their competitors – to overleverage some of their key talent, and usually it comes in spots where the team is chasing the game or trying to protect a lead late.

It’s something for teams and coaching staffs around the league to think about. Do puck stoppages and icing sequences demand that players take a legitimate shift break, or can coaches get more liberal with their ice time allocation for higher-end talent, empowering those same players to play a smarter game in the process?

In a copycat league like the NHL, it is surely something to consider.