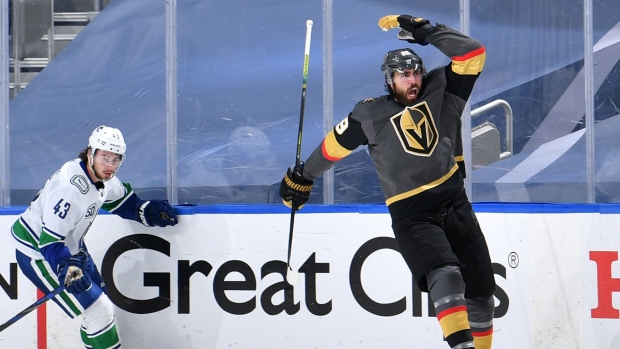 That’s surely what Vancouver Canucks head coach Travis Green is thinking after a 5-0 drubbing at the hands of the Vegas Golden Knights. The beauty of the Stanley Cup Playoffs – particularly with this year’s relentless scheduling – is that one bad game can be washed away quickly by a strong bounce-back performance. If Vancouver has taught us anything this season, it’s that they have the capability to do just that.

That’s the good news. The bad news is that the Golden Knights appear to be multiple steps up in difficulty from the St. Louis Blues team Vancouver dispatched in the first round. They are certainly faster and more physical. And their core strength – a sheer depth of talent that allows Peter DeBoer to seamlessly roll four lines – is a team competency that gave the Canucks trouble all season.

One of the most interesting takeaways from Game 1 concerned the way Vegas attacked star defenceman Quinn Hughes. It was the ultimate sign of respect – the type of respect teams showed Erik Karlsson in his prime with the Ottawa Senators.

Hughes, like most great puck handlers and distributors, thrives off space and time. He was afforded very little of either in Game 1.

But unlike St. Louis, Vegas doesn’t have to shuffle their lineup to get one advantageous matchup. The Golden Knights were comfortable rolling their top-nine forwards against the Hughes pairing (and by extension, one of Vancouver’s top two lines) because they can all forecheck and apply rapid puck pressure.

All of those Vegas forwards had a decisive scoring chance and expected goal advantage against the Hughes and partner Chris Tanev: 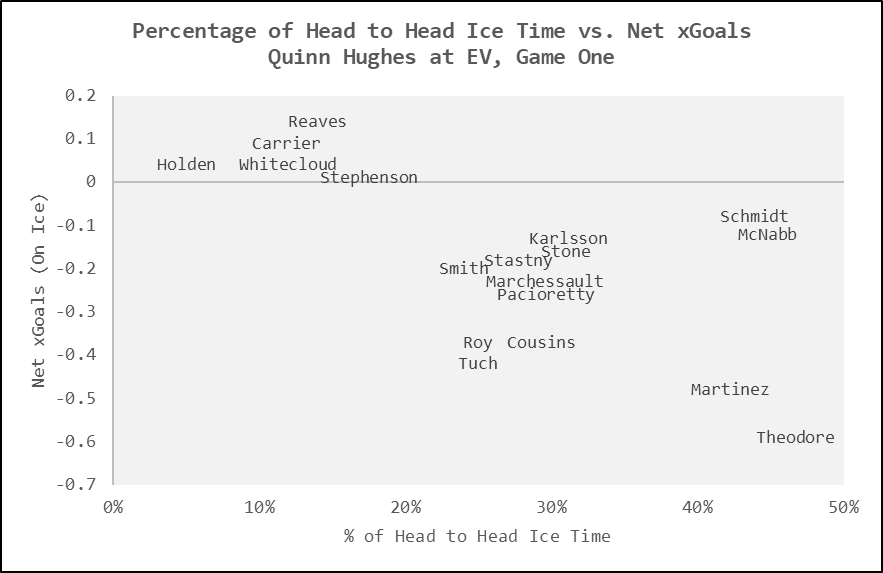 The big negative expected goal differentials are, by and large, driven by shot volume – the Hughes and Tanev pairing played a lot of minutes in their own zone, and were outshot 29 to 20 at even strength despite score effects creeping into the game about halfway through.

But some of those 29 shots against were really in dangerous scoring areas of the ice, and a number of them came off of turnovers from one of the two Vancouver blueliners.

The strategy against the pairing was simple – take away Hughes’ space and force him to let a weaker puck carrier, like Tanev or a forward, assume the breakout role.

What it accomplished was two-fold: the non-stop pressure forced Hughes to make decisions in tight spaces that led to dangerous defensive zone-area turnovers, and the funneling of forwards allowed for Vegas to work their forecheck deep on the more defensive-minded Tanev (via NST): 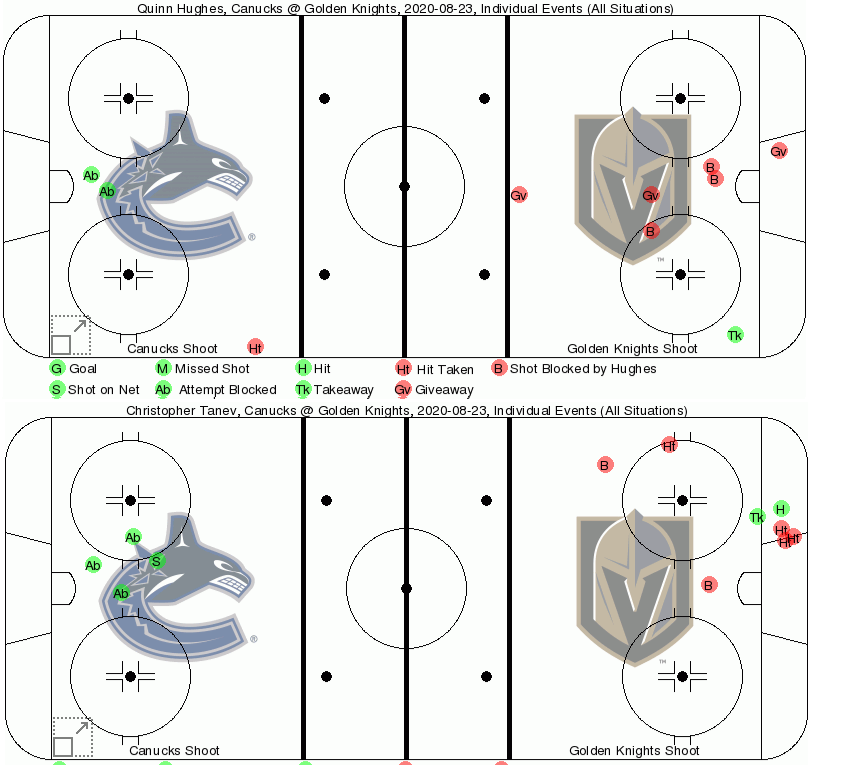 Some of this is an unsolvable personnel mismatch, but some of this is opportunity for Green. Vegas was almost comically aggressive on the forecheck – so much so that Vancouver was able to generate a number of dangerous counterattacking chances off the rush.

But those opportunities won’t matter if the Canucks forward group isn’t providing ample breakout support for their top pairing, and quite frankly, Tanev is going to need to be materially better if the Golden Knights continue hunting for Hughes when they are pressing the attack.

Whatever the case, the Canucks need a quick solution. Chalking this up as a lousy outlier game feels risky, considering the Hughes pairing has been outscored 9-2 over the three games these two teams have played this season.

It’s also a doubly neutralizing tactic, since Green opted to play his most dangerous forwards – Game 1 featured Elias Pettersson, J.T. Miller, and Brock Boeser – in front of the Hughes and Tanev pairing. If Vegas is winning the matchup decisively with all five of those skaters on the ice, it’s a big problem for Vancouver.

It will be interesting to see if the Canucks make any personnel changes to minimize the damage, or if they will focus purely on structural play – emphasizing clean breakouts from the defence, puck support from the forward group on the wings and the centre working deep into the low-slot areas as needed.

Vancouver has shown they are more than capable of playing this style of game, but the level of difficulty has ramped up dramatically in the second round. They’ll need to respond quickly on Tuesday evening, or risk falling down two games to a team that’s not taking their foot off the gas pedal.