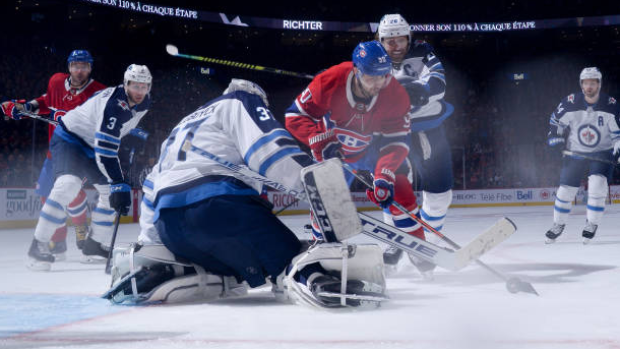 Last week, we studied the ramifications of an expedited NHL draft lottery – one that would see this year’s entry draft moved up to June, with the lottery odds skirting heavily in favour of teams like the Detroit Red Wings and Ottawa Senators. As it stands today, the movement of both the draft and the associated lottery remains undecided.

There is a second change the NHL has been kicking around in recent weeks, and that’s the expansion of this year’s playoff format. The NHL – like most North American sports leagues – has regularly toyed with the idea of increasing its postseason footprint, and this year’s late-season pause gives more reason to review its feasibility.

The benefit of the expanded postseason — the most popular appears to be the 24-team proposal, though other options are being considered — is multi-faceted. It comes at the expense of finishing the rest of the regular season, it doesn’t penalize teams right on the playoff cut line who still had 10 or more games to play, and it creates excitement in most markets about the return of hockey and a late summer run at the Stanley Cup.

There are plenty of unanswered questions about what the framework would look like, but early overtures suggest the divisional winners earn a bye, with the other 16 teams competing for eight playoff bids. If we assume that the league uses the same criteria in selecting the remaining 16 teams (e.g. next best eight teams by points percentage, by conference), we can quickly figure out which teams would meet the new cut line.

In the East, that would mean adding Columbus, Florida, New York (R), and Montreal. In the West, that means including Winnipeg, Minnesota, Arizona, and Chicago: 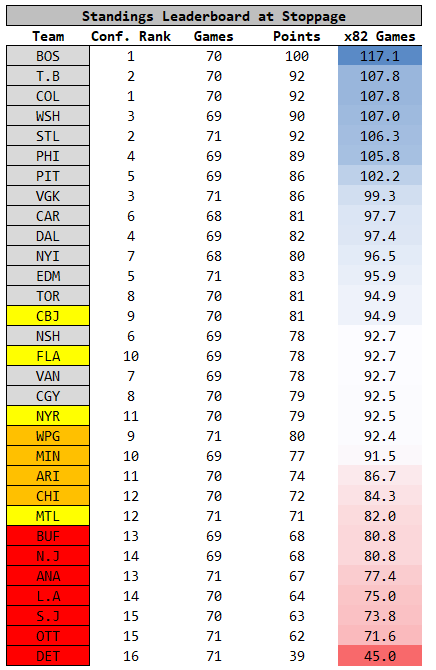 Whenever we talk about playoff expansion, we are talking about a trade – more revenue and more opportunities to sell your game on a longer postseason schedule at the cost of diluting the playoff pool.

The dilution should not be discounted. We are, after all, talking about a postseason where teams like the Blackhawks and Canadiens – pacing for low-80s point totals and a generally disappointing season – jumping into a playoff series. We already have concerns about the quality of hockey coming out of a two-month hiatus. Add in some teams with weak rosters, and you have a compounding problem.

That said, it’s interesting to wonder if the proposal to add eight playoff teams could create an opportunity for an underachieving team to go on a run. It’s hard to know how aggressively these performance numbers will sustain after such a long stoppage in play, but we do have a pretty good feel for the quality of these lineups after 65 or more regular-season games.

Those 65 games weren’t flattering for this group:

For the most part, these teams compare poorly relative to their playoff peers – teams that generally outshot and outscored their opponents at even strength and carried favourable goal differentials at special teams. That said, these teams had enough talent and at least one core competency that kept them afloat in the standings, and sometimes that’s enough to pull an upset in a short series.

Which teams make the best case for upset potential? A few certainly caught my eye:

Montreal Canadiens: Say what you will about the Canadiens and their lack of star power across the lineup, but this was still an exceptionally feisty bunch. The team is sorely missing some finishing talent in the lineup, but they were able to offset some of those deficiencies by playing an exceptional number of even-strength minutes in the offensive zone. Their puck dominance – they would end the regular season first in Corsi% (just ahead of Vegas), second in Expected Goal% (just behind Vegas), and 14th in Goal% (above 51 per cent) – paints them in a much more positive light than the rest of the teams on this list. A lot of that comes from the team’s top line, where Brendan Gallagher and company feast on weaker defences in the low slot. What also puts Montreal in an intriguing position? The playoffs are notorious for limiting special-teams opportunities, which would shelve their equally abysmal power-play and penalty-kill units more than it did during the regular season. In the right matchup, Montreal could cause serious problems.

Minnesota Wild: Betting on Minnesota in the playoffs has never been particularly prosperous, but the Wild offer an intriguing candidacy for those who believe that defence wins championships. The Wild’s underlying defensive numbers are quite strong, but you have to look well beyond the goaltending this season to see them. For example: the team finished 15th in shots allowed at even strength and first in expected goals, but just 18th in goals against. Why? Devan Dubnyk – who had been lights out for years in Minnesota – had an awful season, stopping just 89 per cent of shots in 30 games. Backup Alex Stalock (91 per cent of shots stopped) was better, but still a touch below league average. What if the Wild experienced shorter-term goaltender regression while maintaining their innate ability at keeping opposing shooters to the perimeter, as they did all season? (Data via HockeyViz) 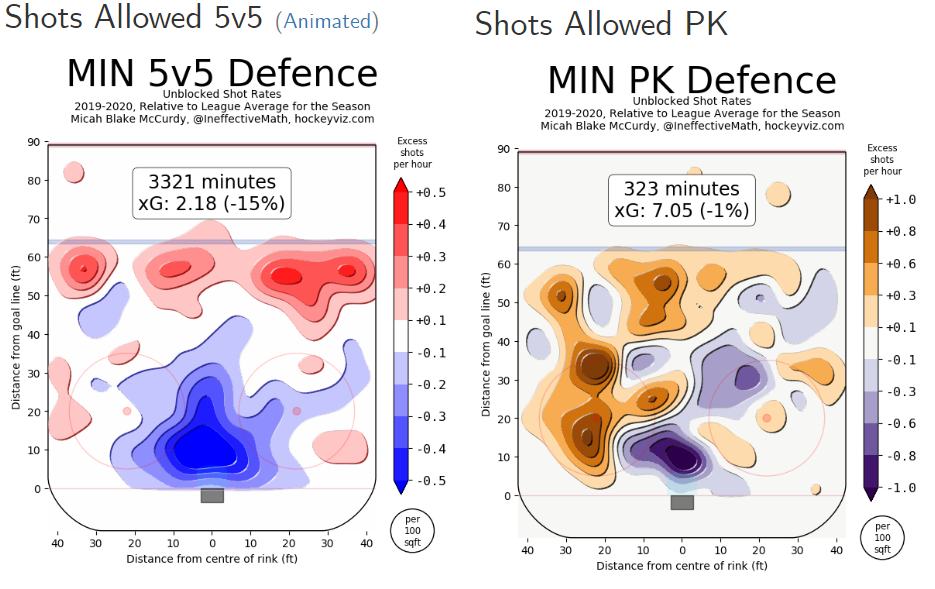 Columbus Blue Jackets: Everyone’s favorite upset team from one season ago offers an alternative to anyone looking for a strong defensive team that isn’t reliant on a pair of goaltenders who struggled most of this season. However, in Columbus’ case, you have to bet on two netminders with very limited experience – Joonas Korpisalo (91.1 save percentage) and Elvis Merzlikins (92.3 save percentage) were outstanding post-Sergei Bobrovsky, but also have a combined zero playoff games. The question with Columbus is rather simple: Where does the scoring come from? When the regular season stopped, the team’s leading scorer was youngster Pierre-Luc Dubois (18 goals, 31 assists) and Gustav Nyquist (15 goals, 27 assists), who currently rank 72nd and 119th in the scoring race, respectively. Some of the lack of scoring is limited opportunity at even strength, and some of it is tied to a ghastly power play that is ranked dead last (5.7 goals per 60 minutes) over the past three seasons. There’s enough talent, especially on the blueline, for John Tortorella’s team to create havoc. Could they recreate magic two years in a row?