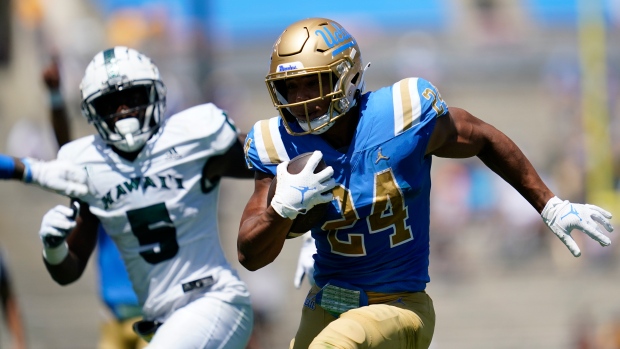 PASADENA, Calif. (AP) — Zach Charbonnet rushed for 106 yards and three touchdowns in his UCLA debut as the Bruins rolled to a 44-10 season-opening victory over Hawaii Saturday at the Rose Bowl.

UCLA scored on its first five possessions as it snapped an eight-game losing streak to teams outside the Pac-12. Six of those defeats were under Chip Kelly, who is in his fourth season.

Charbonnet, who was at Michigan the past two seasons, scored all of his touchdowns in the first half as the Bruins roared out to a 31-3 lead at halftime. He scored their first touchdown midway through the first quarter on a 21-yard run after great blocks from the right side of the offensive line to extend the lead to 10-0.

The junior’s best run of the day came with 47 seconds remaining in the first quarter when he broke four Hawaii tackles before turning on the speed for a 46-yard touchdown to make it 24-3. He then went over 100 yards on his sixth carry with a 21-yard score on the next possession.

Brittain Brown added 78 yards on 13 carries, including a 1-yard TD to make it 17-0 four plays after defensive lineman Datona Jackson picked off Chevan Cordeiro’s pass deep in Hawaii territory and returned it 11 yards to the Rainbow Warriors’ 9.

Dorian Thompson-Robinson was 10 of 20 for 130 yards. He completed all four of his passes on the opening drive of the second half, culminating in a 44-yard strike to Kazmeir Allen to make it 37-3.

UCLA’s final TD came when Ale Kaho blocked Matthew Shipley’s punt and it was recovered by David Priebe in the end zone.

Hawaii’s lone touchdown came late in the third quarter on a 1-yard pass from Cordeiro to Caleb Phillips.

Cordeiro was 24 of 46 for 216 yards. Hawaii is 4-13 in its last 17 games against Pac-12 opponents, including 10 straight road losses. Calvin Turner Jr. came into the game as the nation’s leading returner in career all-purpose yards (4,359 yards), but the senior all-purpose back was held to 50 yards on five receptions.

Hawaii: The Rainbow Warriors allowed 211.7 rushing yards per game last season, which was seventh-worst in the nation among teams that played seven or more games. They gave up 249 yards against the Bruins.

NOT A GOOD START

The game had an announced attendance of 32,982, which is the second-lowest for a UCLA game since the Bruins moved to the Rose Bowl in 1982. The record low remains 32,513 against Oregon State in 1992.

Hawaii: Hosts Portland State on Sept. 4. It will be the Rainbow Warriors’ first home game on campus after Aloha Stadium was shuttered at the conclusion of last season.

UCLA: Hosts No. 16 LSU on Sept. 4 in the first meeting between the two programs.