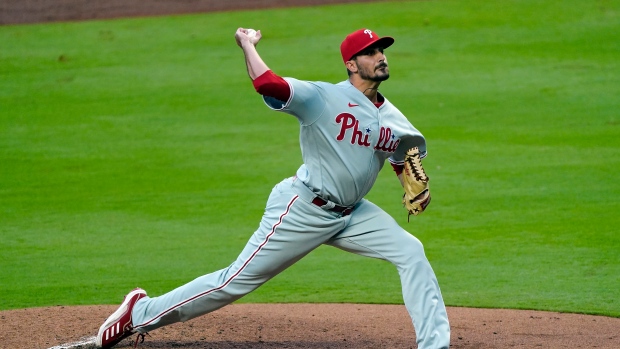 PHILADELPHIA — It didn't take the Philadelphia Phillies long to display that sense of urgency Bryce Harper wanted to see.

After a third straight loss to the New York Mets on Wednesday, Harper was critical of himself and an offence that scored four runs in three games and twice had 14 strikeouts.

Facing Carlos Martinez, the Phillies jumped ahead 6-0 in the second with their biggest inning of the season. Nine straight batters reached safely after Martinez got the first out.

“I think it does resonate when it comes from a guy like Bryce and he’s not one to necessarily sugarcoat it,” Phillies manager Joe Girardi said. “He included himself and he had the big double and swung the bat extremely well tonight, but I like it because that sense of urgency is important because every game matters as we found out last year and teams have found out in the previous years.”

Eflin (1-0) allowed six hits, struck out six and walked none in seven-plus innings. The lanky right-hander retired 12 straight batters at one point and exited after surrendering a two-run homer to Justin Williams in the eighth.

“I have a lot of confidence in myself,” Eflin said. “I think I can go out there and compete with the best of them.”

Martinez (0-3) gave up six runs and five hits in five innings. He retired the last 11 batters he faced and tossed four perfect innings of his five.

“Just bad luck,” Martinez said. “I got a little frustrated. I have to focus on my next start.”

The Phillies scored each of their runs in the second after Realmuto struck out.

Alec Bohm and Didi Gregorius hit consecutive singles. Jean Segura followed with a wind-aided, RBI double that centre fielder Dylan Carlson misplayed by about 20 feet. After Mickey Moniak was intentionally walked to load the bases, Eflin was hit by a pitch to force in a run.

McCutchen then lined a two-run single to right and Hoskins walked to again load the bases. Harper ripped a two-run double to right-centre to give Eflin a comfortable cushion.

Realmuto connected off Kodi Whitley in the seventh, increasing the lead to 8-0.

“Our lineup, when we’re hitting on all cylinders, is a lot of fun to watch, and I’m excited to go into tomorrow and hopefully take this momentum into tomorrow as a team and do our thing,” Harper said.

Williams ended Eflin’s night when he launched his first career homer, an opposite-field drive to right-centre.

“We’ve been out of sync, haven’t played clean and crisp like we are used to,” Cardinals manager Mike Shildt said.

Both teams wore No. 42 to honour Jackie Robinson. Phillies left fielder Andrew McCutchen tips his cap before every at-bat and after every homer because Robinson acknowledged his wife, Rachel, that way at a home game as portrayed by the late Chadwick Boseman in the movie “42.”

“The adversities he battled on and off the field is something I could not begin to fathom,” McCutchen said. “He is my idol and he will forever be a legend. ... My gesture is as an ode to Jackie and Rachel.”

Phillies: Hitting coach Joe Dillon, third-base coach Dusty Wathan and bullpen coach Dave Lundquist were not with the team because of COVID-19 protocols.

LHP Matt Moore (0-0, 7.56 ERA) makes his third start for the Phillies while LHP Kwang Hyun Kim makes his season debut for the Cardinals on Saturday night. Kim had an excellent rookie season, going 3-0 with a 1.62 ERA last year.