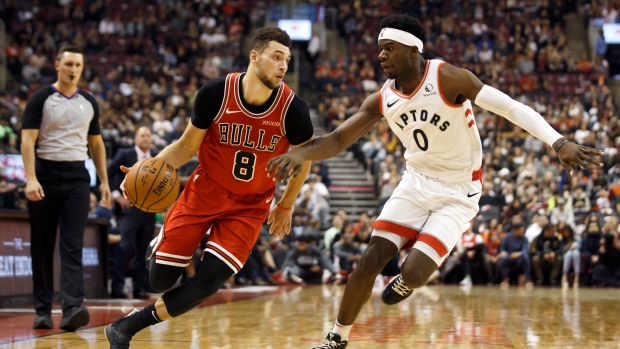 TORONTO — Nick Nurse doesn't think that all the miles his Raptors have travelled during training camp will stop his players from adequately preparing for their NBA title defence.

A whirlwind tour saw the Raptors assemble in Toronto on Sept. 28, then head to Quebec City for five days, before jetting off to Tokyo for a pair of pre-season games and return to Toronto for a lacklustre 105-91 loss to the Chicago Bulls at Scotiabank Arena on Sunday.

"I'm not overly concerned," Nurse said. "I think you guys can see there are probably eight players for sure who will make the roster, and we're looking for a couple more who can fill into some roles, and it could be a lot of guys at this point."

The elite eight Nurse will rely on when the Raptors begin their season with their banner-raising opener against the New Orleans Pelicans on Oct. 22 include Kyle Lowry, Pascal Siakam, Fred VanVleet, Marc Gasol, Norm Powell, Serge Ibaka, OG Anunoby and Terence Davis.

After this group, Nurse outlined the type of players he wants on his roster.

Canadian Chris Boucher remains in the mix. The six-foot-10, 200-pound Montreal native was asked at the beginning of training camp to switch from centre to power forward.

The adjustment hasn't been easy. But the 26-year-old Boucher has a week to improve.

"It's a process, trying to figure out how I can change my game," Boucher said, adding his most significant challenges has been making reads off his teammates and knowing when to set screen.

The Raptors, who returned from Japan on Friday evening, rested Siakam, VanVleet, Gasol, Powell and Ibaka against the Bulls. Lowry has been in recovery mode since undergoing off-season surgery on his left thumb. He is expected to increase his workload this week.

As a result of Gasol and Ibaka getting the night off, Boucher was back at centre against Chicago. He scored 11 points but grabbed only a pair of defensive rebounds.

"My big concern with him is can he rebound with the strength and size of NBA guys," Nurse said. "He let a couple get away from him tonight. The other concern is will he finish because again he can reach around with those long arms in the G-League level and there is nobody to contest him. At this level, there is more size."

Anunoby led Toronto with 15 points, followed by Matt Thomas with 12.

Playing at Scotiabank Arena for the first time since a 106-105 loss against the Golden State Warriors in Game 5 of the NBA Finals, the Raptors jumped out to a 7-0 lead. But that was about as good as it got for Toronto.

Canadian tennis sensation Bianca Andreescu sat courtside. The U.S. Open champion was presented with a Raptors jersey during a timeout in the second quarter.

Toronto will play its final pre-season game in Brooklyn on Friday before their season opener at home against the New Orleans Pelicans on Oct. 22.

This report by The Canadian Press was first published Oct. 13.