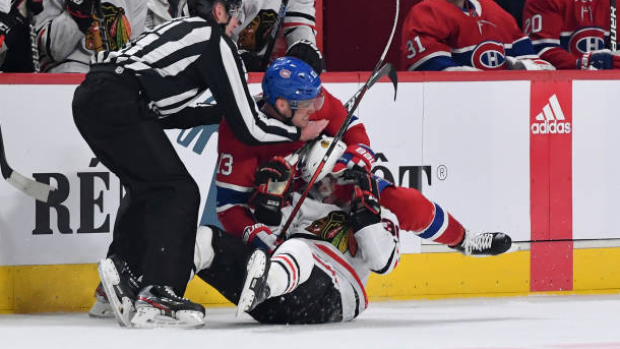 MONTREAL — An unneeded penalty by Max Domi really hurt Montreal's chances of winning, and it's not the first time this season.

Domi’s roughing penalty led to a power-play goal and the Chicago Blackhawks held on to beat the Montreal Canadiens 4-1 on Wednesday night.

Chicago was leading 2-1 in the second period when Domi hit Matthew Highmore with his shoulder in open ice. Domi then grabbed Highmore by the collar and helmet and tackled him to the ice.

“During the play, I certainly wasn’t trying to take a penalty,” said the Canadiens centre. “I watched the replay and it’s a penalty. It’s how it goes. It’s unfortunate they scored on that. Obviously you can’t do that, especially given the situation we’re in. Can’t afford to do that.”

That penalty proved costly for Montreal when Alex DeBrincat’s power-play goal at 11:27 made it 3-1 Chicago. Backup Charlie Lindgren had lost his blocker in a goal-mouth scramble right before the goal.

Coach Claude Julien benched Domi for the remainder of the second as punishment for the penalty.

“I did what I had to do, it’s as simple as that,” said Julien. “When you take a foolish penalty like that, there are going to be consequences. It’s not the first time he’s taken a bad penalty.”

Earlier this season, the Canadiens lost 4-3 in overtime to New Jersey after Domi took interference and unsportsmanlike penalties on the same play. The Devils tied the game with Domi sitting in the box.

The Blackhawks (22-20-6) put the game to bed with 8:20 remaining in the third after Drake Caggiula stripped Jordal Weal of the puck in the neutral zone and beat Lindgren glove side on the breakaway.

Chicago was coming off a 3-2 overtime win against Ottawa on Tuesday and improved to 7-3-0 in the last 10 games.

“I thought we deserved that win,” said Hawks coach Jeremy Colliton. “We played hard, we were on our toes, putting pressure on them. We had a lot of offensive-zone shifts. We did a decent job of closing out the game.

“Good step for us to win in relatively good control.”

Zack Smith scored twice in a fast-paced first period before Montreal (20-21-7) even managed its second shot on net.

Miscommunication between Lindgren and Tomas Tatar behind the net led to Smith’s short-handed goal at 5:42. Lindgren hesitated with the puck and Tatar knocked into him, giving Caggiula the chance to feed Smith in front.

“The first goal was frustrating, you never want to give up a goal like that,” said Lindgren, who stopped 24-of-28 shots. “It’s a goal that’s very preventable. I take full responsibility for that. I made a couple of fakes behind the net and nothing happened. I got the puck poked off my stick and they got an open net.

Smith came into the contest with two goals in 40 games all season. The former Senators forward doubled his tally after four shifts.

Montreal’s only goal came 54 seconds into the second. A no-look pass from Ilya Kovalchuk into the slot fooled Jonathan Toews and Phillip Danault scored beneath Corey Crawford’s glove to make it 2-1.

Crawford improved to 11-2-2 against his hometown team with a 32-save effort. The Blackhawks goaltender has won his last six games at Bell Centre.

The Canadiens have lost nine of their last 11 games and are nine points out of a playoff spot in the East. They dropped to 9-12-4 at home this year.