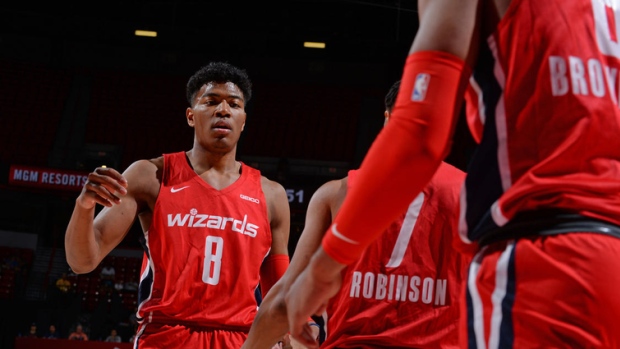 Hachimura became the first player from Japan to be chosen in the first round of the NBA draft, taken with the No. 9 overall pick by the rebuilding Washington Wizards in June.

The former Gonzaga University star played in the NBA's Summer League for the Wizards but now will take up national duties for Japan at the World Cup and for other warm-up games, including New Zealand again on Wednesday.

"We got off to a good start and went from there ... I want to lead this team," Hachimura said after Monday's game. "I'm just happy to be back in Japan after a while for these friendly games."

The 21-year-old from Toyama Prefecture scored 22 points in the first half and impressed Detroit Pistons head coach Dwane Casey.

"I think he's going to be a heck of a player, the NBA is a physical game, a tough game. He's got a great body for the NBA," Casey, who is in Japan for a coaching clinic and was at the game as a spectator, told Kyodo News.

"I see Rui ... developing his game to move out to the 3-point line. Because that's where the NBA is. Great kid, great work ethic."

Japan played without Memphis Grizzlies' forward Yuta Watanabe, who has an ankle injury.

Japan opens its World Cup competition against Turkey on Sept. 1 in Shanghai and then takes on Czech Republic and the United States. The top two teams in the group advance to the second round.