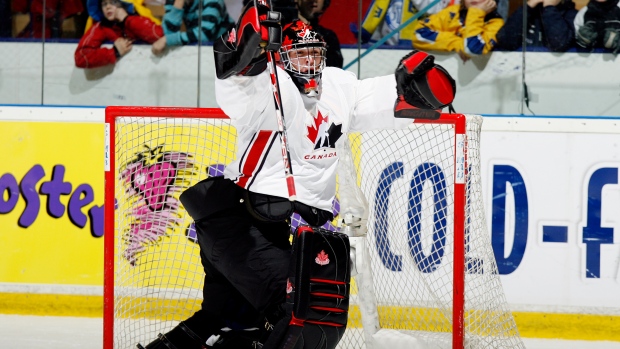 The NHL and NHL Players’ Association held a joint press conference at Air Canada Centre on Wednesday to announce new details ahead of the 2016 World Cup of Hockey.

Here’s what you need to know:

1. Originally labeled the Young Stars, the tournament entry comprised of players ages 23 and under from the United States and Canada will officially be called Team North America. Not so inventive.

Ages are determined by Oct. 1, 2016. Any American or Canadian player younger than 24 on that date (e.g. born on Oct. 2, 1992 or later) will be available for selection exclusively for Team North America.

In other words, Connor McDavid will only be allowed to play for Team North America. Oilers general manager Peter Chiarelli, a Canadian, and Blackhawks general manager Stan Bowman, born in Canada but has identified and worked with USA Hockey, will manage the team.

2. The other “all-star” type entry will be called Team Europe, or more appropriately Team (rest of) Europe.

Satan will be able to select players from any country not named Finland, Sweden, Czech Republic or Russia. Those include, but are not limited to, Germany, Slovakia, Switzerland, Belarus, Norway, France, Latvia and Slovenia. Slovakia’s Zdeno Chara and Slovenia’s Anze Kopitar were on hand for the press conference.

3. Group A will be comprised of Team Canada, Team Czech Republic, Team Europe and Team USA.

5. So far, coaching staffs have not been named for Team Canada, Team USA, or Team North America - only management positions.

Former Edmonton Oilers coach Ralph Krueger will coach Team Europe. Satan will also be able to select players who aren’t in the NHL, according to team president Reindl.

Jere Lehtinen was also announced as the GM for Team Finland; he will be assisted by Columbus Blue Jackets GM Jarmo Kekalainen.

6. Team Canada will reportedly conduct their training camp in Ottawa. They are the reigning World Cup of Hockey champions, dating back to the 2004 when the tournament was last played, when they beat Team Finland 3-2 at the Air Canada Centre.

World Cup of Hockey training camps will open Sept. 4-5 ahead of the tournament. Exhibition games are likely to be played.

7. Rosters for the 2016 World Cup of Hockey will consist of 23 players, including three goaltenders.

8. Steven Stamkos asked the best question during the press conference: “If Team Europe wins, which anthem will they play?”

9. The World Cup of Hockey will be played using NHL rules and games will be officiated by NHL referees.