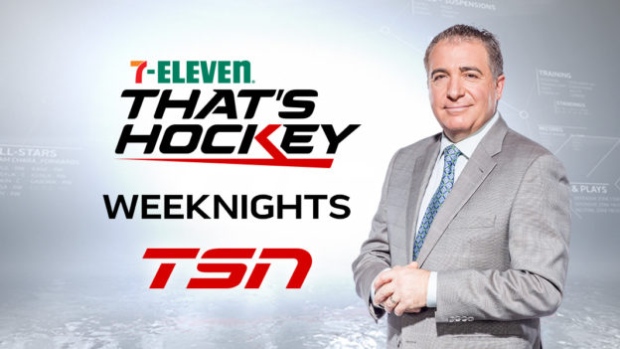 TORONTO (October 1, 2018) – With an intriguing NHL season approaching following one of the most active off-seasons in league history, TSN and 7-Eleven announced today that the world’s largest convenience retailer will serve as the Title Sponsor of 7-ELEVEN THAT’S HOCKEY, TSN’s longstanding daily hockey news show with fan-favourite host Gino Reda.

The partnership officially kicks off today (Monday, Oct. 1), with 7-Eleven featured prominently in 7-ELEVEN THAT’S HOCKEY, providing fans with a Big Gulp of hockey news weekdays at 7 p.m. ET (visit TSN.ca for the complete broadcast schedule). In addition to becoming the Title Sponsor, 7-Eleven will also be integrated into various show segments and features, including a daily feature to highlight great saves, bloopers, video breakdowns, stats leaderboards, and highlighting storylines for each of the seven Canadian NHL teams in only 11 seconds each.

“THAT’S HOCKEY and TSN are the preeminent source for Canadians to access all things hockey in one place; which is a commitment to hockey news convenience we get,” said Doug Rosencrans, VP & GM of 7-Eleven Canada Inc. “We’re excited to partner with Canada’s Sports Leader to bring more of what our customers want – content that is well-stocked with hockey news.”

“7-Eleven is an iconic brand that Canadians know for its variety and reliability, two qualities That’s Hockey delivers daily in its hockey reporting,” said Mark Milliere, Senior Vice-President and General Manager, TSN. “We look forward to working with 7-Eleven as we continue to serve hockey fans as Canada’s top source for daily hockey news.”