TORONTO — Even though they’re jumping off the scoreboard each time he walks to the plate, Vladimir Guerrero Jr. claims he doesn’t look at his numbers.

“Only homers. I only count my homers. That’s it,” Guerrero deadpans. “I don’t look at anything else.”

As hard as that is to believe, he’d probably feel pretty good about himself if he sorted Major League Baseball’s statistical leaders in just about any offensive category you can think of.

Vladdy Jr. walked into spring training and started raking back in March. It hasn’t stopped since.

The breakout everyone was waiting for is still going strong, so much so that it’s time to stop calling it a breakout.

This is just who he is — the dominant, middle-of-the-order force he was expected to be since the day he signed as a 16-year-old back in 2015.

It may sound like hyperbole, but the 22-year-old legitimately does not have a single hole in his swing and that’s why he’s going to challenge for the triple crown, not only this season but likely in a handful of seasons to come.

It hasn’t all come together this quickly just because he shed a few pounds, either.

It’s been a complete 180 for Guerrero in terms of mindset, habits, preparation and the way he goes about his work as a hitter.

With him since day one in the big leagues – and even prior to that as the organization’s hitting coordinator – Blue Jays hitting coach Guillermo Martinez has seen the transformation behind closed doors.

Or behind closed cages, that is.

“His work, his dedication, his focus … I think he’s learned a lot these past couple of years,” Martinez says. “Sometimes, it’s good for young players to go through some tough situations in their career so they can learn from it and make adjustments.

“It goes back to the added pressure of trying to do too much and trying to prove to fans and coaches and players that he’s an elite hitter and it kind of took him out of his element at the beginning, but now he’s back to where he needs to be."

The world has taken notice and he’s leading the way when it comes to All-Star Game votes, too.

It’s almost a comically simple approach that Martinez is preaching to get Guerrero back to what he did in the minor leagues, spraying the ball all over the ballpark with authority.

The proof is in the numbers.

This year? Those figures sit at 37 per cent to the pull side and 28 per cent of the time he’s going oppo.

“One number you can look at is just how much he’s going to the opposite field,” Martinez says. “All those numbers that you mention that you can see on paper, those are all a byproduct of staying through the middle of the field.” 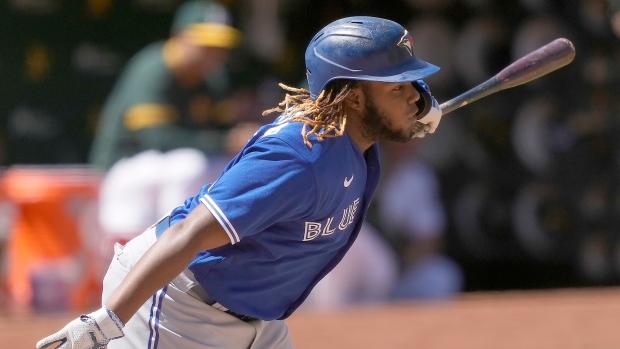 The key phrase is “control your at-bats.”

“That’s something we talk about every single day — controlling your ABs and staying through the middle of the field,” Martinez says. “He knows the kind of threat he is as a hitter and I’m sure pitchers do, as well. He’s not going to get many pitches to hit. The one thing he had trouble with his first year and, I think, he got better with it last year from the halfway point and on is just being able to recognize when pitchers are trying to stay in the zone with him or literally hoping for the best and hoping he gets himself out.”

Take a walk or take advantage of the one mistake Guerrero may get in at-bat.

The gaudy 14.3 per cent walk rate — otherwise known as 41 of them in 67 games — is evidence that message is resonating.

Pitchers were always careful with Guerrero because of the reputation he forged long before he got to the big leagues.

Everyone knew to be careful.​

“They’re real careful,” Martinez says. “Yeah, they can live around the edges of the plate, but a lot of pitchers make mistakes and that’s exactly what good hitters take advantage of.”

From his vantage point, Vladdy hasn’t seen much of a change in how he’s attacked from last year to this year.

“I would say it’s the same,” Guerrero says. “I’m seeing the same pitches and they’re attacking me in the same way. I’m just more mentally ready now and trusting myself, trusting my teammates, whoever’s hitting behind me, and of course I’m trusting my coaches.”

Much was made of the Vladdy Jr. launch angle, but leading baseball in bombs will quiet that crowd in a hurry.

It has inched up this year, but incrementally. From 6.7 degrees as a rookie to a big dip at 4.6 degrees last season, before jumping back up to 7.2 degrees in 2021.

During his rookie year, Vladdy found the baseball with the barrel 29 times in 375 batted balls, a rate of 7.7 per cent. This year he’s already barrelled it up 30 times across 196 batted balls.

That’s an elite 15.3 per cent of the time he’s connecting with the sweet spot, placing him inside the top 10 in baseball.

Damage will ensue when that happens so frequently.

Asked if he’s dug into the numbers, Martinez just laughs.

“I have, yeah,” he says. “I mean, obviously, it’s outstanding what he’s doing right now. He’s separating himself from everybody else. But, really, for something that tough to do, his mindset is very, very simple. It’s just get a good pitch to hit over the middle of the plate and just stay through the middle of the field, which allows him to get the ball in the air more consistently.”

Does Martinez preach getting the ball in the air?

Not really. But he knows the value of lifting the baseball.

“I haven’t seen the numbers lately but I know within the first month his launch angle, and more importantly his ground-ball rate, had improved,” Martinez says.

After sitting at 50 per cent and 55 per cent during his first two seasons, Guerrero’s ground-ball rate is at a career-low 46.4 per cent.

Everyone loves exit velocities these days.

It’s akin to the novelty of the first public radar guns back in the day.

When it comes to scorching the baseball at 95 mph and above — the definition of a hard-hit ball for Statcast — Guerrero definitely has that trick in his bag, sitting third on the 2021 leaderboard with a 117.4 mph max, behind only Aaron Judge and Shohei Ohtani at 119 mph on the dot.

The ball has left his bat at 95-plus a total of 106 times already this season, trailing only his teammate Bo Bichette and Salvador Perez, who’ve scorched 107 baseballs above that threshold.

Hitting the ball hard isn’t just Vladdy’s natural talent at work with the mechanics of his swing, but it’s a byproduct of many things.

“That's a good question because I obviously want guys to hit the ball hard, but it’s not something I try to lean on and search for it,” Martinez says. “You search for quality at-bats and squaring up the baseball. If you do the little things prior to that and you have the strength and the bat speed, the exit velocities will show up. But if you’re swinging at bad pitches, borderline pitches, pitches you can’t do damage with, you’re not going to have the exit velocity.”

Since last September, Guerrero’s big exit velos have been produced with a different piece of lumber in his hands.

“It was actually at the end of last year, I started using Teoscar Hernandez’s bat, which are the same measurements, and I felt very comfortable,” Guerrero explains. “Then in the off-season I was working out with his bats and when I played winter ball I was just feeling so comfortable that I ordered my bats with the same measurements as his.”

It’s been a sensational start and he’s showing no signs of slowing down.