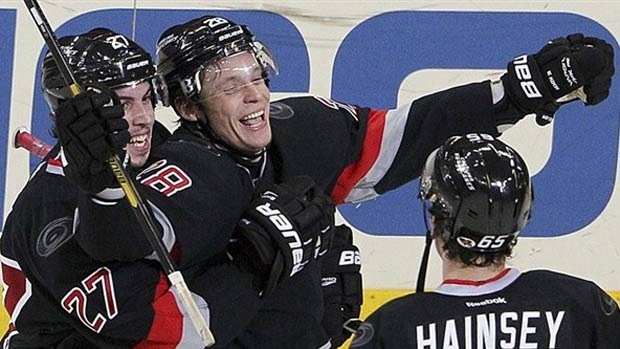 In today’s NHL, there are two types of bad contracts: those that are poisonous and unsalvageable, and those that seem to be a regrettable overpayment.

To be fair, there are really only a couple of contracts that fit into that first group. The first would be Toronto’s David Clarkson and his buyout-proof $36.75-million contract signed last summer. The second would be Florida’s Dave Bolland and his $27.5-million deal. One commonality between the players was that each seemed to be signed -- in large part or in totality -- to provide 'intangibles'. The Clarkson and Bolland eras are off to predictably bad starts. (Note: I would very seriously entertain Philadelphia’s Andrew MacDonald as a third player here.)

It’s the other group – the ‘regrettable overpayment’ one – that’s fascinating. Here, you have an assortment of players on bad deals for a variety of reasons. Two of those players, including Los Angeles’ Mike Richards and Ottawa’s Colin Greening, were waived this week.

Eventually, teams reach breaking points with the respective player, refusing to wait any longer for an increasingly unlikely rebound.

I think there’s certainly value in identifying a few of these ‘bad contract’ types that exhibit signs of being salvageable, especially since teams shopping these players are generally looking for little more than cap relief. It’s a bit of a dumpster-diving exercise, but if you have the cap room to roll the dice and take a shot on a potentially-productive player for next to nothing, it’s something worth considering.

Carolina’s Alex Semin sits firmly in the bad contracts category, a $35MM healthy scratch who has drawn the ire of head coach Bill Peters. The team is already considering waivers – a buyout is another option, though general manager Ron Francis seems cool to that idea.
Alex Semin’s fall from grace has really been about an unprecedented collapse in the scoring department.

A quick graph can show how Semin’s raw scoring output has simply fallen apart in 2014-2015:

For a player who has never struggled to score at the NHL level, Semin’s fall-off in 2014-2015 is mesmerizing. Making matters worse, the Carolina Hurricanes as a team have seen their shot generation drop off of a cliff, which means fewer overall chances for Semin and the rest of his teammates.

Even still, this lack of scoring seems surreal for a player of Semin’s abilities. Abilities that I can say are well established – for all of his criticisms, Semin’s been regarded as a great shooter. Semin’s posted an individual shooting percentage of 13.0% since coming into the league in 2003-2004. When you can sustain a shooting percentage of 13.0% over 1,700 shots, it’s likely that your individual shooting ability is a skill.

Perhaps we can expect for his goal-scoring to regress back near his natural mean. But, does that mean much if the player is getting kicked around at even-strength? For a player who has been a routine fixture in the press box, one would assume that Semin’s game has struggled well beyond some poor individual shooting puck luck.

To get a better picture of what the team has done historically with Semin on the ice (and is doing in 2014-2015), we can pull out goal rates, scoring chance rates, and shot-attempt rates. Ideally, we like to see that the team in question is better with the player on the ice than off of the ice – a positive relative number would signify as much.

If, theoretically, Semin has depreciated as a player, one would expect to see it in the below graph:

Well, that’s certainly curious. Other than an odd downtick in the lockout-shortened season, Semin’s teams always seem to be better from a possession (Corsi%) or scoring chance perspective with him on the ice. That’s very, very encouraging. And, for five years straight, Semin’s teams have always been better from a goal-based analysis – including this year.

However, the big slide in the RelativeGoal% line is curious – and likely one of the smoking guns working against Semin this season. Carolina may still be better with him on the ice than off, but it’s a razor-thin margin now, a stark contrast from years past.

Is there something contributing to that RelativeGoal% slide beyond some unlucky individual shooting? Perhaps there’s something peculiar going on in the defensive end, where Semin and his teammates are getting another dose of some unfavourable variance.

And there is our answer. Alex Semin and his teammates can’t seem to buy a save this season. It’s important to note that over the past four seasons, Semin’s goaltenders have stopped around 93% of shots at 5-on-5. This year? 88%.

None of this makes Semin’s contract a good one – he’s a 30+ forward who relies heavily on his goal-scoring ability, and it’s definitely possible that age regression’s going to bite hard in coming years. That said, I think there are a lot of factors working against Semin outside of his control right now. And, if I have a chance to move one of my bad contracts out for the bad contract of Semin, it’s a move I strongly consider.

This sort of trade is all about calculating risk and reward, and with Semin, there’s far greater potential for payoff than many of the other players currently sitting with unsavoury term and dollar.