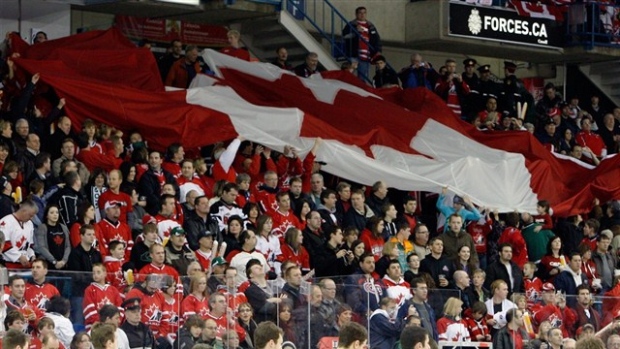 The World Junior Hockey Championship is back in Canada after two years overseas and the home team has come home hoping to end its medal drought.

Canada’s failure to earn a medal over the past two years marks the first time since the start of the Program of Excellence in 1982 that the nation has returned empty-handed from back-to-back tournaments. Canada is also riding its second-longest gold medal drought, with 2015 marking the sixth tournament since the team last won gold.

With the tournament back on Canadian ice – here’s a look at how the team has done in its own barn.

This year marks the 11th time Canada has hosted since the tournament officially began in 1977.

The first official tournament held in Canada was in Montreal in 1978. Team Canada earned a bronze medal behind a Soviet team led by Sergei Makarov and Vyacheslav Fetisov. But it was a standout performance that marked that tournament as special, with Wayne Gretzky making his lone appearance at the age of 16.

Canada didn’t host again until 1986 when Hamilton welcomed the World Juniors back after a victorious 1985 tournament in Finland. Once again, the Soviets were dominant with Valeri Kamensky leading the way. A 14-point performance from Shayne Corson helped lead Canada to silver, improving upon its previous turn as hosts.

In 1991, Canada got its first taste of home-ice glory in one of the tournaments that helped propel the World Juniors to its holiday classic status. For the second time on home ice, another phenom took over the tournament as 17-year-old Eric Lindros racked up 17 points and earned a tournament All-Star nod. That said, it wasn’t Lindros’ name that was synonymous with the Saskatoon tournament, but Newfoundland’s John Slaney.

Canada and the Soviets were tied late in the tournament’s final game, with the Soviets knowing that a draw would be enough to earn them a gold medal under the round-robin format. In the final minute, Slaney’s slapper from inside the blue line found the back of the net and made Canada the first nation to ever win gold on home ice.

Heartbreak came at the end of the decade as Canada had to watch Russia win gold in 1999 and 2003. With the format changed to a gold medal game to decide the champion, the Russians edged Canada first with an overtime goal by Artem Chubarov in Winnipeg and with a two-goal third period comeback in Halifax.

The tides turned back Canada’s way once more in the latter half of the 2000s. Team Canada won two gold medals at home within a four-year span as part of its second five-year dynasty in tournament history.

The 2006 team was backstopped by Justin Pogge’s record three shutouts and a complete defensive effort that saw Canada allow just six goals over as many games.  The 2009 tournament is another that lives on in Canadian World Junior lore. Trailing Russia late in their semifinal, Jordan Eberle scored one of the most iconic World Junior goals ever, tying the game with just five seconds left on the clock. The contest went to a shootout with - who else - Eberle providing the eventual game-winner with a beautiful backhand move. Canada handily beat Sweden in the gold medal game to earn its fifth straight title.

The pendulum swung back to heartbreak in the tournaments Canada has hosted since.

The year after Eberle thrilled Ottawa, it was American defenceman John Carlson who stunned fans in the gold medal game in Saskatoon. After yet another late-game thriller from Eberle to tie the game at five, an overtime rebound off an Alex Pietrangelo effort was taken the other way by the Americans with Carlson providing the dagger on a three-on-one.

Canada returned home - specifically to host cities Calgary and Edmonton - looking for redemption in 2012. Down 5-1 in the second period of their semifinal against Russia, Canada stormed back to cut the deficit to just one goal late in the third period. The clock ran out, though and Canada eventually settled for bronze with a win over Finland.

So, where does it leave Canada’s hopes for 2015 in Montreal and Toronto?

To date, Canada has never failed to medal at home, so history favours an end to the medal drought. Also, given past performances of phenoms like Gretzky and Lindros at home, the table may well be set for a dominant showing from potential first-overall NHL draft pick Connor McDavid.

Canada’s tournament totals are also better at home than overseas. Since the start of the Program of Excellence in 1982, Canada is 46-7-2 (.855 winning percentage) at home tournaments, earning four golds, four silvers and two bronze medals. By comparison, the nation is 119-33-17 (.754) abroad.

One final trend to consider, quirky though it may be, is the calendar. Canada has won gold in every official tournament where the year has ended in “5”: 1985 in Finland, 1995 in Red Deer and 2005 in Grand Forks.