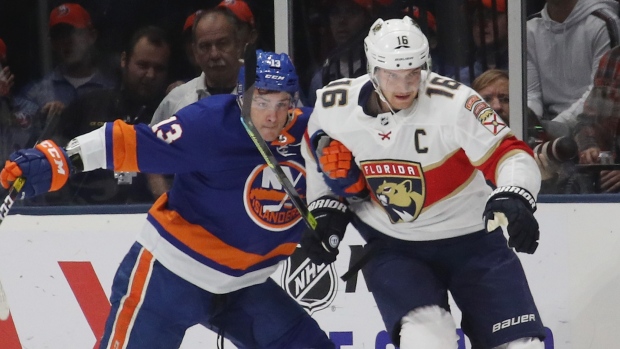 Today, we look at a third Eastern Conference matchup, this one featuring the seventh-seeded New York Islanders against the No. 10 Florida Panthers. 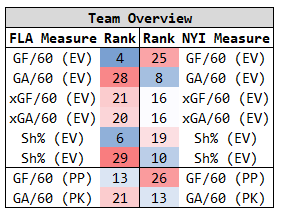 If you had told Coach Q he would be handed the keys to the league’s sixth-best scoring team last September, he would have cried tears of joy. Jonathan Huberdeau, Alex Barkov, Mike Hoffman, Evgenii Dadonov, and Noel Acciari contributed 52 per cent of Florida’s entire offence, and formed one of the most productive top-sixes in the National Hockey League.

But Florida’s surge in the offensive power rankings only helped keep them afloat in the standings because the Panthers devolved into one of the league’s most porous defensive teams – in many ways, a replica of their division rival in Toronto.

Prized off-season acquisition Sergei Bobrovsky – who inked a seven-year, $70-million dollar deal last summer – had a disastrous season, stopping just 90 per cent of shots. The Florida defence never made it particularly easy on him, conceding flurries of shots from dangerous areas in and around the crease on a routine basis: 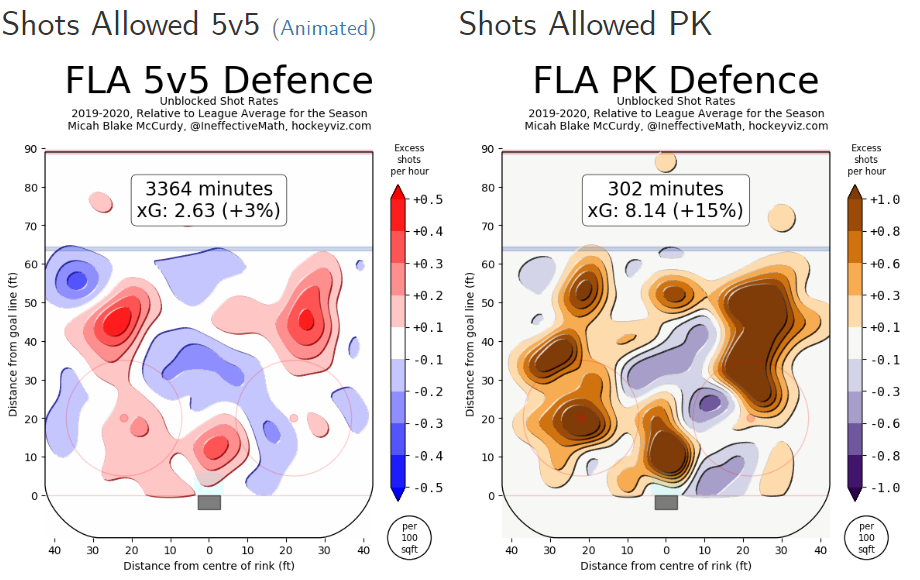 Out on Long Island, we saw more of the same from Trotz’s polished defensive club. The team leaned on a strong blueline and the outstanding goaltender tandem of Semyon Varlamov and Thomas Greiss, finishing the season with the ninth-best goals against rate in the league (2.8), virtually identical to Stanley Cup contenders like the Colorado Avalanche and Tampa Bay Lightning.

But much like last season, finding offence on a nightly basis was a challenge, and that was true at both even strength (25th in the league) and on the power play (26th in the league).

While Florida brings five 20-goal scorers to the play-in series, New York brings just two in forwards Brock Nelson (26) and Anders Lee (20). The Islanders managed to score two goals or less in nearly half of their regular-season games – not exactly a winning ingredient in a league where scoring rates continue to climb.

The issue isn’t that the Islanders aren’t capable of getting into the dangerous scoring areas, but rather that they simply do not generate nearly enough shots or scoring chances to routinely threaten goaltenders.

Shooting heat maps illustrate just how little this team creates when it’s not in the low slot, and it’s a big problem: 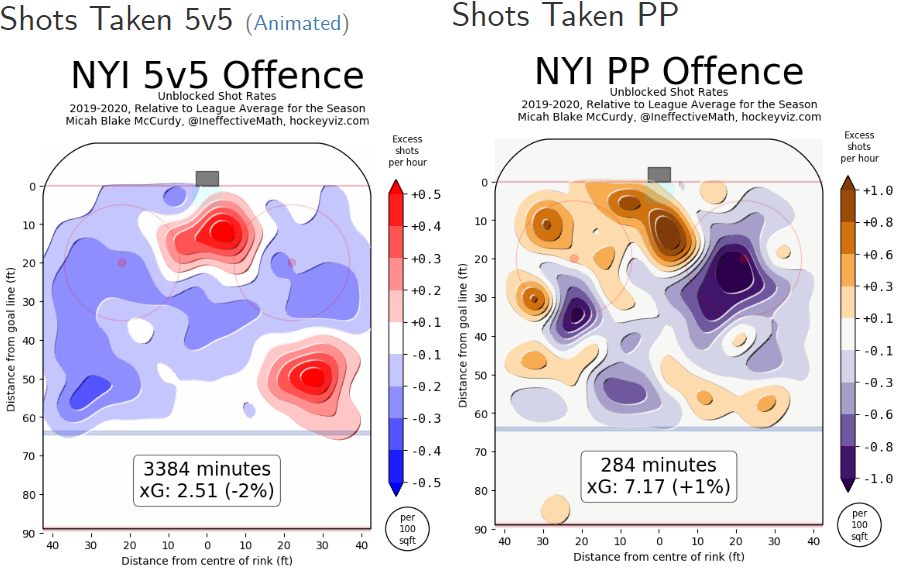 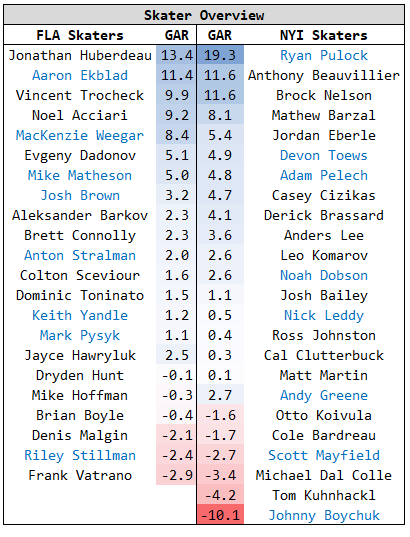 To say that 25-year-old Islanders defenceman Ryan Pulock had a season would be something of an understatement. Pulock’s continued development as a credible two-way defenceman took another big step in 2019-20, and, at least by regression-based measures like Goals Above Replacement, the number of defenders who had better seasons can be counted on one finger – Nashville’s Ryan Ellis.

If it weren’t obvious from the sheer minutes Pulock played (averaging 23  per night) under Trotz’s purview, consider the goal differentials of the Islanders with him on the ice versus off. At even strength, Pulock primarily played with Adam Pelech on his hip and behind the team’s top-six forwards – true at both even strength and on the power play.

In both scenarios, the Islanders were certainly better with the Pulock pairing on the ice than off, and the differentials are quite large. (Note: Pulock’s differentials on the penalty kill are worse, but the team was also reticent to use him there relative to other options in Scott Mayfield and Johnny Boychuk.)

Pulock and company will have their hands full with Florida’s top six – a group anchored by Huberdeau, who was chasing down his scoring high set back during the 2018-19 season with 92 points.

Quenneville made a concerted effort to play Huberdeau with Barkov, a similarly gifted offensive player whose defensive prowess is heralded across the league. The chemistry is obvious. Thirty per cent of Florida’s even-strength goals came with both of Huberdeau and Barkov on the ice, and that number rises to 73 per cent if you isolate it just to power-play scoring.

Here is the issue for any team drawing into a matchup with the Florida Panthers this season: they aren’t a difficult draw if Bobrovsky is stopping just 90 per cent of shots. But if Bobrovsky can recapture any element of what we saw from him back in Columbus, the Panthers immediately become a difficult out. He can be the ideal eraser behind a lacklustre defence, and the team has already proven that it can score with most teams in the league. But Bobrovsky wasn’t Bobrovsky or anything of the sort this season, and the Panthers sacrificed a number of wins in the standings as a result.

Yet Florida surely has the easier decision of the two teams for now in net – Bobrovsky will get the keys to the car, if only because Chris Driedger and Sam Montembeault aren’t viable alternatives.

The Islanders have a tandem problem. They can only start one of Varlamov or Greiss, and despite rotating starts, their save percentages were separated by a single goal. I suspect Varlamov is the Game 1 guy, but it will be fascinating to see what type of leash Trotz has on his starting goalies considering how competitive the position was all season.

Of the eight matchups in the play-in round, I think this is the biggest coin flip, so to speak. I do think Florida has a higher degree of talent in their skater ranks this season, and it would stand to reason that Bobrovsky – even if he isn’t the same Bobrovsky we saw in Columbus – can’t be as bad going forward as he was over the past 50 games. He simply has had no other stretch like this in his career, and usually that bodes well for a favourable performance regression.

The pick is Florida in five.