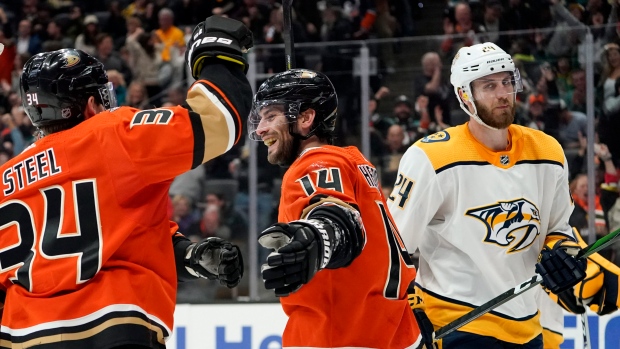 ANAHEIM, Calif. — Adam Henrique had two goals and an assist, Ryan Getzlaf got the deciding goal int he fifth round of the shootout and also had three assists, and the Anaheim Ducks beat the Nashville Predators 5-4 Sunday night.

Daniel Sprong had a goal and an assist, and Cam Fowler also scored to help the Ducks end a three-game losing streak. John Gibson made 22 saves.

Craig Smith scored twice, and Rocco Grimaldi and Austin Watson each had a goal for the Predators, who have lost four of five. Juuse Saros made 43 saves.

Roman Josi had an assist to extend his point streak to 10 games, the longest ever by a Nashville defenceman.

With the Predators trailing 4-2, Smith pulled them within one at 4:13 of the third, and Grimaldi tied it at 6:30 with a sharp-angle shot after Josi lost his footing readying a backhand shot.

Josi has seven goals and 11 assists during his point streak. It was Josi’s 10th assist in the past six games.

The Ducks scored three goals in the second period after falling behind 2-1 on Smith’s first power-play goal of the season at 2:59.

Fowler tied it up with a wrist shot with 7:26 left in the period, and Sprong put Anaheim back in front with 5:08 remaining by following up Fowler’s one-timer for his first power-play goal. Henrique made it 4-2 with 3:38 to go on the power play when Sam Steel’s shot struck his right skate and careened in.

It was Henrique’s first three-point game of the season and his second multi-goal game.

Henrique backhanded his own rebound in to put the Ducks in front 1-0 with 7:54 left in the first, but Watson tipped Colin Blackwell’s shot from the point past Gibson to tie it with 49 seconds remaining.