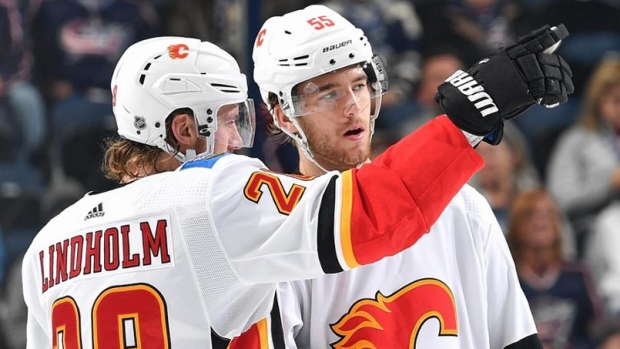 Two and a half years ago, in the summer of 2018, Calgary Flames general manager Brad Treliving sensed an opportunity.

Despite Johnny Gaudreau scoring 84 points and Mike Smith winning 25 games with a 0.916 save percentage, the Flames missed the playoffs and finished fifth in their division. Treliving wanted to shake up the roster - and knew he’d have to give up quality roster players to do so.

Elias Lindholm and Noah Hanifin were on the Carolina Hurricanes and restricted free agents in need of new contracts. Treliving thought highly of them, dating back to before either were drafted and Treliving was the assistant general manager with the Phoenix Coyotes.

“Elias has always had that skill, the ability to shoot the puck,” Treliving said. “Noah stood out as a young kid because he was big and an elite skater and always played above his age group. You go to a game and he’s this big guy that’s big, strong, power, just a beautiful skater. He stuck out.”

When Treliving called Carolina Hurricanes general manager Don Waddel in 2018, Lindholm, the fifth overall pick in the 2013 NHL Draft, hadn’t quite lived up to his pre-draft billing as a top-line centre. Hanifin was selected in the same slot two years later and coming off a 32-point campaign while mostly paired with Trevor van Riemsdyk. Treliving believed that Hanifin and Lindholm had more to give and could reach that next level, just in a different shade of red.

“We felt there was a lot more upside with both players than what they had shown to that point in their careers, specifically in Elias,” Treliving said.

“We really felt that there was significantly more offensive upside than what he’d shown, not only from the scouting eye but from our data. We used a lot of data that basically showed that the only thing he wasn’t doing was finishing. He was doing everything right for 190 feet of the rink. It’s just that last 10 feet of putting the puck in the net and whether that was bad luck or low shooting percentage. The mechanics of producing offense, everything was in line other than the puck crossing the goal line.”

Calgary Flames pro scout Steve Pleau, based on the East coast, was particularly passionate about the players and had the ear of Treliving. The general manager reached out to Waddell and, ahead of the 2018 draft in Dallas, a framework for the deal was agreed to. TSN’s Pierre LeBrun first reported that a deal between the two clubs could happen, to which Treliving, at the draft in Dallas, responded that that speculation was the result of people indulging “into the red wine.”

Not surprisingly, after the general manager shot down rumors of the transaction, the deal was consummated on the draft floor. The negotiation was smooth, with Treliving joking that there were some profanities with Waddell involved. Calgary sent top-pairing blueliner Dougie Hamilton, power forward Micheal Ferland, who was fourth on the team in goal scoring, and an unsigned prospect named Adam Fox to Carolina.

“We traded some good players to get [Hanifin and Lindholm],” Treliving. “It wasn’t that we didn’t like those players. When you look at Adam Fox and Micheal Ferland, whether we were going to be able to have them. In Adam’s case, quite frankly, we had a difficult time signing him and Micheal had a year left on his contract before becoming a UFA. We really liked him but there was a question about the ability to retain him. Dougie was under contract with him, but you have to give to get.”

Before either played a game with the Flames, the team inked Lindholm and Hanifin to extensions. Lindholm signed for six years and $29.1 million, while Hanifin got the same length and $29.7 million. Treliving compared the contract process to getting married without really dating, but his staff had done its research.

“You do a lot of homework on it and feel comfortable,” he said. “You rely on background and information you gather and make a determination that these are people you want to invest in.”

Since the deal, Treliving, Pleau, and the Flames’ data have been proven correct.

Lindholm, who scored 78 points in the season following the deal and is perhaps the NHL’s most underrated centre, is producing a point-per-game clip this season on a line with Johnny Gaudreau and Matthew Tkachuk. He’s a mainstay on the top powerplay and penalty kill units and has garnered Selke Trophy consideration since coming to Calgary. Hanifin, meanwhile, has blossomed into a top pairing blueliner in his own right. They are integral in the short and long term for the Flames, who are off to their best start in 20 years - and that June 23, 2018 trade could go down as the best in recent franchise history.

“We’re really happy with how they both have progressed and they’re still not old players,” Treliving said.

“There’s still big upside. These are sound, good young men that are good to have in your group and they put in the work.”