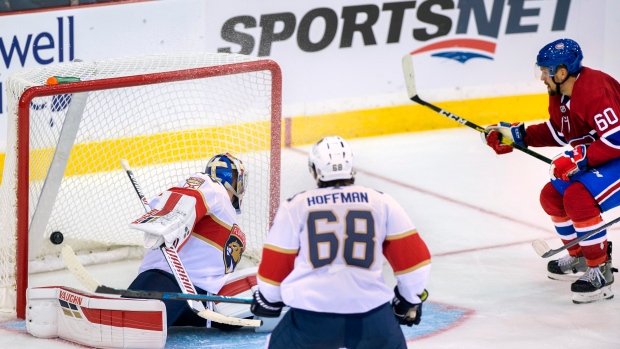 Belzile's short-handed goal with less than five minutes to play lifted the Montreal Canadiens to a 4-3 pre-season win over the Florida Panthers on Wednesday in the 2019 Kraft Hockeyville game in Bathurst, N.B.

"I try to have a full throttle every shift, as hard as I can, making good decisions on the ice," said Belzile. "When I do those things usually that's my identity and I play well."

Matthew Peca, Jeff Petry and Riley Barber also scored for the Canadiens, who improved to 2-0 in exhibition play.

Montreal coach Claude Julien said he was pleased with the effort from his squad, especially Belzile's line.

"That line was probably our best line tonight because of just their compete level. All three of those guys competed hard. I can say the same thing about (Ryan) Poehling's line," he said. "Our bottom two lines were better than our top two lines."

Panthers coach Joel Quenneville said it was a close game throughout, it's tough to lose when you have the power play.

"Games are on the line at that stage. In regular-season games, that's a valuable one or two points that are left on he table," he said.

Belzile fed Peca with a quick pass in front of the Florida net to beat goaltender Chris Driedger at 5:47 of the opening frame.

Florida had just come off the power play when Dadonov scored the equalizer at 15:55, beating Montreal netminder Charlie Lindgren on assists from Huberdeau and Aaron Ekblad.

Petry fired through traffic from the point to beat Driedger low on the trapper side to restore Montreal's lead at 4:38 of the second period.

But the Panthers responded six minutes later on the power play when Hoffman fired a quick shot off a cross-ice pass from Aleksander Barkov and found the back of the Montreal net.

Huberdeau scored at the 6:48 mark of the third to give Florida the lead for the first time in the game. The Panthers forward is in his eighth season with Florida after a record-breaking 2018-19 campaign. He set the franchise-record for single-season assists with 62.

Florida's lead was short-lived, when Barber tied the game at 11:23 to set the stage for Belzile's winner.

This is the 13th year of Hockeyville. The small community of Renous, N.B., won $250,000 for repairs and upgrades to their rink, and the chance to host the NHL game. Because of the high demand for tickets, it was decided to hold the game in the larger venue in Bathurst.

Roberto Luongo said he was happy to represent Florida at Hockeyville in New Brunswick, giving him a chance to visit Bathurst where he helped the Acadie-Bathurst Titan win the Quebec Major Junior League championship in 1998-99.

"It's fun to be back. It's been a while but just to see the people outside and their enthusiasm brings back some great memories," Luongo said.

The 40-year-old announced his retirement in June following a career 489 NHL wins as a goalie.

"I'm happy with my decision and think it was the right one for me," he said.

Luongo said instead of working out all summer, he got to spend more time with family and enjoy a few extra slices of pizza.

The Canadiens and Panthers square off again Thursday night for their next pre-season game at the Bell Centre in Montreal.