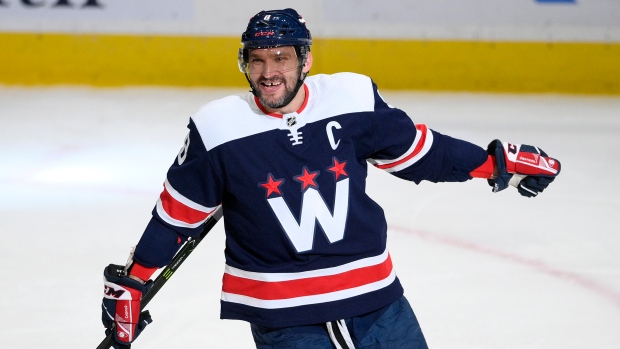 WASHINGTON (AP) — Alex Ovechkin scored two of his three goals over 56 seconds in the second period and the Washington Capitals beat the Florida Panthers 4-3 on Friday.

Ovechkin has 18 goals, most through 21 games in a season by a player in at least his 17th season. He's 19 goals from passing Jaromir Jagr for third on the career list following his 28th hat trick.

Sergei Bobrovsky allowed Tom Wilson’s eighth goal, which tied it at 1 at 1:34 of the second, and Ovechkin’s first goal. Bobrovsky left after Ovechkin’s goal at 2:50 but returned after Ovechkin scored against Spencer Knight at 3:46.

Ovechkin’s third goal came at 4:02 in the third period.

The Panthers’ Sam Reinhart scored his fourth goal at 6:49 of the second, and Bobrovsky left again, and returned with 2:42 to play in the second.

Bobrovsky stopped 19 of 22 shots and Knight made six saves in seven chances.

Jonathan Huberdeau’s seventh goal gave the Panthers a 1-0 lead with 32 seconds to play in the first.

Carter Verhaeghe scored at 5:36 of the third to cut Washington’s lead to 4-3.

Capitals: D Justin Schultz was out after injuring his upper body in Wednesday’s game against Montreal. He was replaced by Dennis Cholowski, who played in his second game this season. ... F T.J. Oshie (lower body) is on injured reserve for the second time this season. ... F Conor Sheary (upper body) missed his third straight game. ... F Lars Eller, who hasn’t played since November 14, is out of COVID-19 protocols but not ready to play.