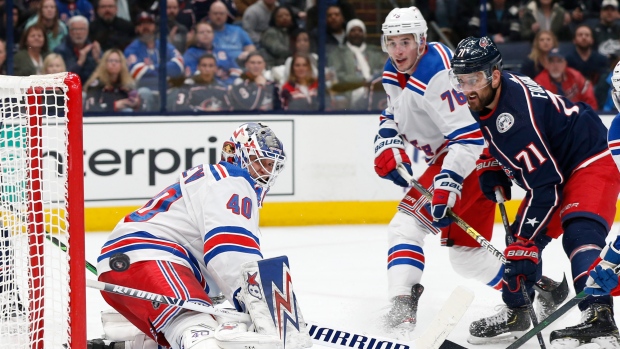 The Columbus Blue Jackets didn't help themselves. They gave the Rangers a late power play with a penalty for too many men on the ice. Two seconds after it ended, and with Jacob Lilja rushing out of the box, Chris Kreider ripped a shot from the slot past Elvis Merzlikins. The goal with 3:12 left broke the 1-1 tie, and Ryan Strome added an empty-netter to cap the 3-1 Rangers win.

The victory put the finishing touch on a successful road back-to-back for the Rangers, who beat Minnesota in a shootout on Thursday night. They moved within seven points of current Eastern Conference wild-card teams Columbus and Philadelphia.

“We think we made some great strides and just continue to play good hockey at a clutch time right now,” New York coach David Quinn said. “Obviously, last night coming back the way we did, and then tonight scoring late to win the game. We’ve talked about the fact that we’ve had to come together as a team over the last few months, and it hasn’t showed more than it has the last few games.”

Pavel Buchnevich also scored for the Rangers, who have won five of the last six games and 11 of the last 16. Alexandar Georgiev had 36 saves in winning both ends of the back-to-back.

“We played really good defence,” Georgiev said. “It made my job easy.”

Oliver Bjorkstrand got his team-leading 19th goal and Elvis Merzlikins had 25 saves for injury ravaged Columbus, which is winless in its last four games (0-2-2) on the heels of a 10-game points streak.

“I thought it was some sluggish minutes in the first period,” Columbus coach John Tortorella said. “We attacked. We got pucks into the blue. We had opportunities to score. We didn’t.”

New York scored off a face-off just 22 seconds into the game when Buchnevich redirected a Jacob Trouba shot from the point high past Merzlikin’s glove.

“It was lucky, I think,” Merzlikins said. “It was kind of an easy shot from the blue line then he tipped it. It’s hard to get a tip.”

After a sustained attack in the second period in which Columbus outshot New York 22-7, the Blue Jackets were rewarded with some luck. Bjorkstrand tied the game when he took a blind, backhanded swipe at a loose puck and beat Georgiev late in the second.

Columbus' Boone Jenner hit the post on a short-handed breakaway with 4:44 left before Kreider scored the winner.

“I tried to be patient and cover as much net as possible and wait for him to make a move,” Georgiev said of the late Blue Jackets chance. “He made a move to the side, turned out pretty good.”

NOTES: Georgiev started ahead of Igor Shesterkin, who missed his second game after tweaking an ankle. He is day to day. ... Columbus F Liam Foudy was obligated to go back to London of the Ontario Hockey League to play Friday night after playing Thursday for the NHL team. Jakob Lilja was recalled from Cleveland (AHL) to replace him. ... Blue Jackets D David Savard is the only NHL player with at least 120 blocked shots and 100 hits. ... Columbus still has nine regulars out with injuries, including G Joonas Korpisalo, D Seth Jones and forward Cam Atkinson. ... New York D Marc Staal returned after missing Thursday night's game with the flu. ... Buchnevich is the NHL's 20th player to score in the opening 22 seconds of a game this season.