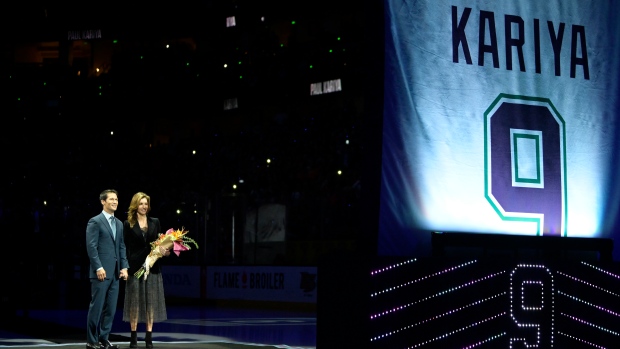 ANAHEIM, Calif. — The Anaheim Ducks raised Paul Kariya's No. 9 to the Honda Center rafters Sunday night, honouring the high-scoring forward who became a Hall of Famer.

The Ducks celebrated Kariya's career before their game against Buffalo with an emotional event ending with the hanging of Kariya's banner alongside the No. 8 of Teemu Selanne, Kariya's longtime linemate and close friend.

"Thank you for making tonight the most memorable night of my life," said the 44-year-old Kariya, who voluntarily spent several years at a distance from hockey and the Ducks after his playing career ended in 2010 due to concussions.

Kariya was the first draft pick in the history of the then-Mighty Ducks, and he spent his first nine NHL seasons with Anaheim. He scored 300 of his 402 career goals for the Ducks and served as their captain for seven seasons, leading them to their first Stanley Cup Final in 2003. He joined the Hockey Hall of Fame last year alongside Selanne.

"He's so humble," Selanne said. "He almost thinks he doesn't deserve this honour, but I don't care."

Kariya and Selanne have the only retired numbers in Anaheim's 25-year franchise history, although the Ducks will retire Scott Niedermayer's No. 27 next year.

Kariya was joined on the ice by Selanne and Steve Rucchin, reuniting the three forwards who formed the most memorable line in Ducks history. Dozens of former Ducks from Jean-Sebastien Giguere to Stu Grimson also travelled to Anaheim to celebrate their former teammate.

Niedermayer didn't play with Kariya in Anaheim, but they won Olympic gold medals together for Canada in 2002. He praised Kariya as "truly an example of how to always try our best and how to carry ourselves while doing it.

Ducks owners Henry and Susan Samueli, who bought the team after Kariya had left, have been eager to bring Kariya closer to his first NHL franchise.

"Paul played the game with heart and soul," Henry Samueli said. "Simply put, he was the Ducks' first franchise player."

The speedy, goal-scoring forward was a fan favourite from his very first Ducks practice in Orange County, where he recalled nearly 9,000 fans were in the stands to watch him at Honda Center. He scored 50 goals and 108 points as a 21-year-old prodigy during the 1995-96 season, and he produced four additional 80-point seasons for Anaheim.

"I couldn't have asked for better teammates, and I certainly could not have asked for a better group of friends," Kariya said. "I was very lucky to start with an organization that gave me an opportunity to have a big role right away, and to be asked to be a leader early in my career."

Kariya scored one of the most important goals in Ducks history in June 2003, but it also epitomized the brutal nature of his career and its eventual end. After New Jersey's Scott Stevens left Kariya motionless on the ice with a devastating hit in the second period of Game 6 of the Stanley Cup Final, Kariya shockingly returned to the Anaheim ice and scored a goal that helped to force a seventh game.

Kariya played parts of six seasons for Colorado, St. Louis and Nashville after leaving Anaheim, but his sixth recorded concussion in December 2009 eventually made it too risky to continue playing.

Kariya still lives in coastal Dana Point, where he is an avid surfer. The Ducks patiently waited for his disappointment about his career's end to subside before luring him back to an active role with the club in recent years, culminating in this poignant ceremony.

"Over the years, many of the games, the wins and losses, have faded from my mind," Kariya said. "But I can remember, like it was yesterday, the ovation I received stepping on this ice for my first practice here, and the roar of this crowd when we beat the Phoenix Coyotes for our first playoff series victory here (in 1997). ... You literally and figuratively picked me up off the ice in Game 6 of the Stanley Cup Finals. Thank you to all the fans for supporting me for nine incredible years."