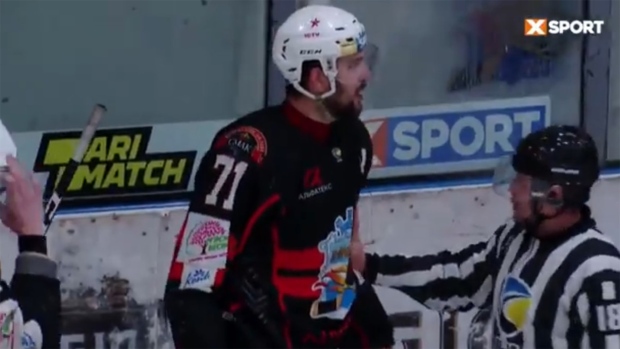 After originally saying the ban was for three games with the option of an additional 10-game suspension or a fine, TSN Hockey's Gord Miller tweeted that the Ukrainian league issued a correction and clarified Denyskin does not have the option of paying a fine instead of serving the 10 games.

According to the Federation official, Deniskin can NOT pay the fine instead of serving the 10 games. An official with the Ukrainian Hockey League apparently tweeted out incorrect information earlier today, using the word “or” instead of “and” when referring to the fine.

Miller tweets that 10 games is the maximum allowable under the league's code of conduct and that rule will be reviewed at the end of the season.

Denyskin, a forward for HC Kremenchuk, will also be fined in addition to the suspension.

The 23-year-old was ejected from the game between the two teams on Sunday after taunting Smereck, who is Black, by mimicking peeling a banana and eating it.

Smereck announced Tuesday he would be taking an indefinite personal leave of absence from hockey.

HC Donbass initially responded Wednesday by demanding a reconsideration of the ruling.

"$1870 for racism?! For racist actions towards Donbass player @jalen_smereck, Kremenchuk player Andrey Deniskin was disqualified for three matches. Deniskin was also given 10 matches of an additional disqualification or fine $1870," the club wrote on Twitter. "We demand a reconsideration of the decision!"

$1870 for racism?! For racist actions towards Donbass player @jalen_smereck, Kremenchuk player Andrey Deniskin was disqualified for three matches. Deniskin was also given 10 matches of an additional disqualification or fine $1870. We demand a reconsideration of the decision! pic.twitter.com/8Elj4og6Dn

The International Ice Hockey Federation could still hand out its own punishment to Denyskin, whose actions they condemned in a statement earlier this week.

"The IIHF condemns in the strongest possible terms the actions of Andri Denyskin," said IIHF president Luc Tardif in a statement on Monday. "There is no place for such a blatantly racist and unsportsmanlike gesture in our sport and in society.

"This a direct assault on the ideals and values of our game, and we will ensure that all necessary ethics violation investigations occur to ensure that this behaviour is sanctioned appropriately."

Update on this disciplinary case from the Ukrainian Hockey League. The Ice Hockey Federation of Ukraine has issued a suspension of 3+10 games against Andri Denyskin for his racist gesture.