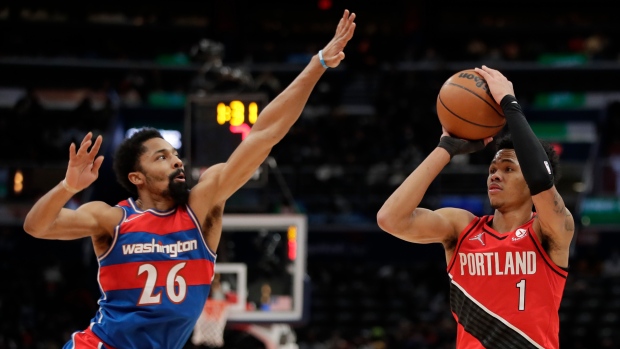 Simons, who missed Thursday’s loss at Denver to attend his grandfather’s funeral, had 26 points in the first half, including seven 3-pointers.

“I’m not the most emotional person in the world,” Simons said. He said he’s trying to help his grieving family.

“The hardest part has been being strong for them," he added, "and coming out here and playing well to put a smile on their face to make them feel better is always good, too.”

The Wizards played without leading scorer Bradley Beal for the third straight game, as well as coach Wes Unseld Jr., who are both in health and safety protocols. Assistant Pat Delany replaced Unseld.

“Simons, we talked about all morning how we’ll he’d been playing,” Delany said. “He got in a rhythm. He got comfortable. Things that we don’t do defensively, honestly. Too many wasted possessions for us, and he made us pay for them.”

Trail Blazers: G CJ McCollum, who hasn’t played since Dec. 4 due to a collapsed lung, is scheduled to return to the lineup on Monday, coach Chauncey Billups said. “He’s starting for sure,” Billups said. “Knowing CJ, he’s not going to want a minutes restriction. … F Larry Nance Jr., who has missed five games with right knee inflammation, shot before the game for the first time since his injury. … G Norman Powell, who’s missed four games in the health and safety, is reconditioning. … C Cody Zeller, who has a right knee injury, is seeking multiple opinions, Billups said. … C Trendon Watford fouled out in just eight minutes. Nurkic also fouled out.

Wizards: F Davis Bertans missed his second straight game with a sprained foot. …Delany said he’s looking forward to Unseld returning as soon as Monday. “I’ll be the first one to hug him and welcome him back.” … Lost for the fifth straight time at home to Portland.

Delany may be one of the few NBA coaches with a LinkedIn account. It simply lists his NBA assistant coaching positions with Charlotte, Orlando and the Wizards. He has over 500 connections.

“I don’t know if I’ve actually logged on to it or been on it in a long time,” Delany said. “Over the last 24 or 36 hours, I’ve gotten a lot of invitations. I didn’t figure out why that was — until this moment … I don’t know how or why I ever joined, but obviously I’m there. I’ll try to accept everybody.”

“I’ve heard so many great things about him from people I trust in the business,” Billups said. “I didn’t spend a lot of time with him, but he checked a lot of boxes.”

Portland won for just the third time this season on the road. They’re 3-14 away from home.

“It’s definitely important,” Nurkic said. “Do the right thing. Put yourself in position to win the game. We did it tonight. A little drama at the end.”