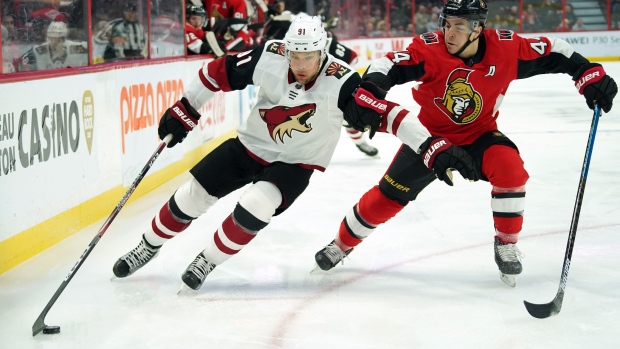 Taylor Hall has heard his name resurface in trade rumours ahead of the Feb. 24 deadline with the Arizona Coyotes fighting to hold on to a playoff spot.

Hall, who was acquired by the Coyotes in December for a package that included prospects Kevin Bahl, Nicholas Merkley and a first-round pick, told NHL.com his hope is to stay with the Coyotes for their postseason push.

"I want to make the playoffs with the guys here," Hall said. "I don't want to go anywhere else."

TSN Hockey Insider Pierre LeBrun reported last week that the Coyotes are willing to take the risk in holding on to Hall and engage in contract discussions after the season. The 28-year-old is currently scheduled to hit unrestricted free agency for the first time in July as he plays out the final season of a seven-year, $42 million contract signed with the Edmonton Oilers in 2012.

The Coyotes currently sit in the final wild-card spot in the Western Conference with a three-point lead over the Nashville Predators, who have four games in hand. Arizona has an 11-12-4 record since acquiring Hall, sitting 23rd in the league over that stretch.

"Everything has been great, besides the winning part," Hall said. "That's basically the only part that's missing over the last couple weeks, but the guys are great, the coaching staff has been awesome, and Arizona is a great place to live. It's been really fun just kind of getting into a new city, getting acclimated with a new group of guys. These guys have a lot of fun. They have a lot of fun playing hockey and it's been fun enjoying that."

Hall has made the playoffs just once in his 10-year NHL career and said he's leaning on his experience of making a late-season run with the Devils in 2018.

"There with 14, 15 games left, we had the hardest schedule in the league, a lot of travel, and we made the best of it," Hall said. "We won games that we had to, and we salvaged points when we didn't have our A game and we made the playoffs on the second-to-last night of the year. So, anything can happen if you have faith in what you're doing and you believe in yourself, believe in your teammates.

"There's a lot of hockey left to be played. That's probably the most important thing to remember."

The Coyotes, who defeated the New York Islanders 2-1 on Monday, will visit the Dallas Stars on Wednesday before games against the St. Louis Blues and Tampa Bay Lightning ahead of Monday's deadline.