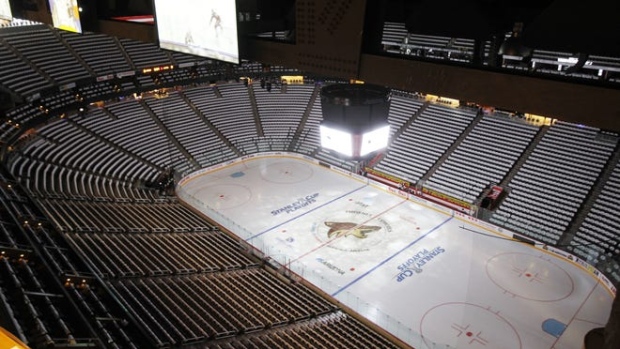 PHOENIX (AP) — The Arizona Coyotes want a new state law that legalizes sports betting changed to allow them to keep running their mobile sports gambling operation when they move from Glendale to Arizona State University's hockey arena next season.

But the Arizona Indian Gaming Association and multiple Native American tribes oppose the last-minute measure approved by the Arizona Senate’s appropriations committee on Tuesday. They argue that the 2021 law that legalized sports betting was part of a complex deal they negotiated with Gov. Doug Ducey that updated the tribal gaming compact.

The Coyotes say the change is needed because ASU's arena only holds 5,000 people, and the law that allowed professional sports team to run retail sports books and mobile gambling operations requires facilities to seat at least 10,000.

The Coyotes plan to use the university's arena for three years while the teams develops a new $1.7 billion project including restaurants, shops and apartments and a new hockey arena on a 40-acre site in Tempe.

The Coyotes don't plan to open a retail operation at ASU, just keep running their mobile gambling operations, according to the Coyotes' Andrew Diss, who testified for the proposal. He said there is a question as to whether or not a change in the law is needed to continue to operate their online gambling operations but said they've received contradictory answers.

“When you ask 10 different attorneys the same question, you get 10 different answers,” Diss said. “That does not give us a sense of comfort that we’re going to be able to maintain our online gaming license if we move to a facility with less than 10,000 people. That is what this comes down to.”

An attorney who represents the Arizona Indian Gaming Association said a law that was just passed last year should not be changed just because the Coyotes found themselves needing a new arena. He said the updated compact that waived tribes' exclusive right to operate gambling in Arizona was dependent on limiting when, where and how sports teams ran their operations.

“That was a compromise by the tribes and as well as the professional leagues and teams, and to go back and change that understanding, especially less than a year later, for something that is really self-created ... shouldn’t land at this body to address,” Bradley Bledsoe Downes told the committee.

Downs was referring to the long-running dispute between the Coyotes and the city of Glendale that led the city to refuse to extend its lease on the Gila River Arena.

Republican Rep. Leo Biasiucci, who sponsored the last-minute amendment approved Tuesday, said the Coyotes plan to spend $40 million for improvements to ASU's new multipurpose arena. ASU said when it announced the deal in February the Coyotes would pay nearly $20 millio n upfront for the improvements.

Sen. Sonny Borrelli, a Republican from Lake Havasu City, said the tribes' opposition was nothing more than an unnecessary turf war. He called the opposition “ridiculous” and said ASU would be the big winner.

“To see this, this opposition from the tribe, is really upsetting because this does not negatively affect the tribes one iota. None, zero,” Borrelli said. “It’s moving from one location to the other, and it’s temporary.”