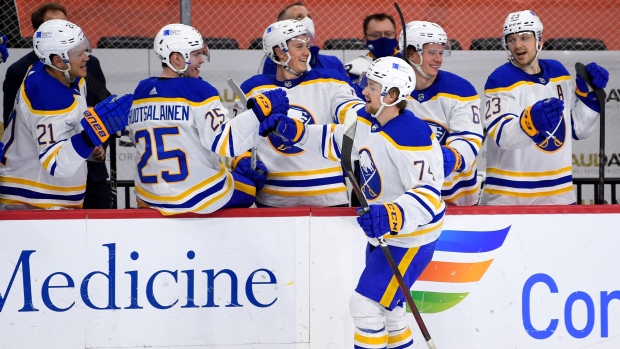 PHILADELPHIA — Rasmus Asplund and Jeff Skinner scored 25 seconds apart late in the third period to lead the Buffalo Sabres to a 5-3 comeback victory over the Philadelphia Flyers on Sunday.

Arttu Ruotsalainen, Sam Reinhart and Casey Mittelstadt also scored for the Sabres, who improved their NHL-worst record to 10-25-6.

Buffalo appeared headed for another defeat before a late rally. Skinner tied the game at 3 with 3:03 remaining. Flyers goalie Carter Hart couldn’t corral Victor Olofsson’s shot from long range, and the puck went off Skinner’s skate and over the goal line as he crashed the net. The goal was upheld after an officials’ review.

“You need big plays at big moments,” Skinner said. “It’s a good feeling when everyone chips in like that.”

Asplund scored the go-ahead goal just seconds later when he scored on a rebound with a backhand from close range.

Linus Ullmark made 40 saves for Buffalo. The Sabres have won four of seven since snapping an 18-game skid with a 6-1 home victory over the Flyers on March 31.

“We’re just starting to realize how we need to play,” Buffalo’s Kyle Okposo said. “And everybody is getting on the same page in the new system (interim coach) Don (Granato) wants us to play.”

Oskar Lindblom, Shayne Gostisbehere and Joel Farabee scored for the Flyers, whose playoff chances took a hit. Philadelphia entered four points behind Boston for the final playoff spot in the East Division. The Flyers skated to a 3-2 home victory over the Bruins on Saturday.

“It’s hard to explain,” Philadelphia coach Alain Vigneault said. “We had that game in total control. We just blew it. It’s a tough one to take.”

Gostisbehere put Philadelphia ahead 3-2 at 3:47 of the third period. Farabee won a battle in the corner, found a wide-open Gostisbehere in the slot and the Flyers defenceman fired a wrist shot between Ullmark’s pads. It was the eighth goal of the season and third in four games for Gostisbehere, who wasn’t claimed by any NHL team when the Flyers placed him on waivers last month.

That looked like the potential game-winner until the late collapse.

Hart made 26 saves and dropped to 8-11-5 to stretch his winless streak to seven straight. His most recent victory was March 18.

Lindblom and Farabee staked Philadelphia to a 2-0 lead after one period.

Lindblom opened the scoring with 8:24 left in the period when Gostisbehere’s pass went off Lindblom’s stick and into the pads of Ullmark. As Ullmark was trying to corral the puck, he accidentally knocked it into the goal with his left pad.

Farabee notched his team-best 15th goal 2 1/2 minutes later on the power play when he followed his own shot from close range and tapped it over the goal line behind a sprawling Ullmark.

Buffalo evened the game at 2 apiece with a pair of goals 46 seconds apart early in the second period.

Reinhart netted his 14th after a beautiful setup by Skinner, who won a faceoff and then passed across to a wide-open Reinhart for the easy goal.

Ruotsalainen, playing in his second NHL game, notched his first career goal on a one-timer from the circle that soared past Hart’s left shoulder.

Ullmark kept the game tied with a stellar stick save with 3 1/2 minutes left in the second on Sean Couturier’s chance. Ivan Provorov’s shot bounced hard off the back boards to the other side of the goal, where Couturier looked to have an easy tap-in before Ullmark lunged and extended his goalie stick with his right hand to prevent the goal.

The Flyers finished their eight-game season series against the Sabres with a 5-3 advantage.

In advance of Monday’s trade deadline, Buffalo’s Taylor Hall sat for the third straight game. The 2018 Hart Trophy winner signed a one-year, $8 million deal with the Sabres in the off-season but has struggled to just two goals in 37 games.

Philadelphia forward Michael Raffl also was a scratch, possibly in preparation for a trade. The veteran has eight points (three goals, five assists) in 34 games this season.

Buffalo centre Dylan Cozens returned to the lineup after missing the previous six with an upper body injury. He had an assist on Ruotsalainen’s tally.

Sabres: At Boston on Tuesday.

Flyers: At Washington on Tuesday.