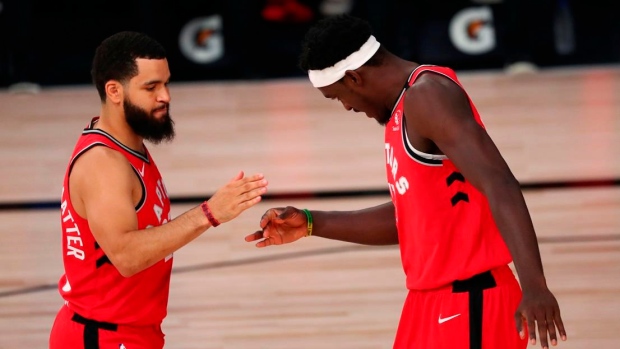 TORONTO – The NBA unveiled its all-star starters on Thursday and, with only one notable exception, it went as most people expected.

Aside from the polarizing selection of Warriors forward Andrew Wiggins, who becomes the third Canadian to ever earn the honour, the results were relatively straightforward.

As leading vote-getters, LeBron James and Kevin Durant will serve as team captains and select their starting lineups from a pool of players including Giannis Antetokounmpo, Joel Embiid, DeMar DeRozan and Trae Young from the East, as well as Nikola Jokic, Steph Curry, Ja Morant and Wiggins from the West. Fan ballots accounted for 50 per cent of the vote, while the league’s players and a select media panel were responsible for the other half.

Also of little surprise, for the second straight year and only the second time in the last eight seasons, the Raptors didn’t have a player voted in to start. Their two most deserving players, Fred VanVleet and Pascal Siakam, finished sixth and ninth in voting at their respective positions. So, their all-star fate now rests in the hands of the coaches, which always seemed to be the most likely scenario.

The league’s 30 head coaches have until Tuesday to submit their ballots for the reserves, which will be announced Thursday evening. They’ll each select two guards, three frontcourt players and two wild cards (players at any position). They cannot vote for their own players, and they can only vote for players in their conference. Meaning, there are only 14 people (the East’s head coaches, minus Nick Nurse) who can cast a ballot for VanVleet or Siakam.

They each have a strong case to represent Toronto in the NBA’s annual mid-season showcase, which will take place in Cleveland on February 20.

VanVleet is averaging 21.7 points, 4.7 rebounds and 7.0 assists in his sixth season, all career highs. He leads the league in minutes and distance travelled per game, ranks third in deflections, and he’s hitting 39 per cent of his 9.9 three-point attempts, making him one of the game’s elite high-volume shooters.

The 27-year-old guard makes winning plays on both ends of the floor. With VanVleet on the court, the Raptors have outscored opponents by 152 points. Without him, they’ve been outscored by 117 points. He ranks seventh in value over replacement player behind six all-star starters and MVP candidates – Jokic, Antetokounmpo, James, Embiid, Curry and Durant.

Like his predecessor, Kyle Lowry, VanVleet’s impact transcends the traditional box score. He’s inherited Lowry’s role as the franchise’s on and off court leader, and the transition has been seamless. His best qualities, which include toughness and resiliency, have rubbed off on his young teammates, helping to expedite the club’s development process.

Siakam had a late start to his sixth NBA campaign, having missed the first 10 games after undergoing off-season shoulder surgery. Coming off a six-month layoff, he needed a couple of weeks to get his rhythm and conditioning back, but since mid-November he’s playing the best basketball of his career.

His game continues to evolve, and he’s taken another big step forward as a playmaker. With more reps initiating the offence, even serving as the team’s backup point guard recently, Siakam has recorded seven or more assists in nine of his last 16 games.

So, what are their chances of getting in?

VanVleet doesn’t exactly have an all-star pedigree, but he shouldn’t be sneaking up on anybody after making a strong push and just missing the cut a year ago. And if anybody should be able to appreciate his story – working his way from an undrafted free agent to franchise cornerstone – it’s a group of coaches.

“He’s so under appreciated,” said Trail Blazers head coach Chauncey Billups, who will only be able to vote for the West reserves, unfortunately for VanVleet. “I think he’s maybe the most underrated player in the league. He can do it all. He’s a lockdown defender. He’s a big shot taker and maker. He’s tough as nails… I don’t think he gets enough credit.”

“He’s earned every bit of what he’s getting and what he’s doing,” said Pistons head coach, and former Raptors coach Dwane Casey. “He should be an all-star, and Pascal’s [also] making a statement to be an all-star, [with] the way he’s playing.”

Siakam has already proven he belongs in the conversation, and everybody loves a redemption arc. After a tough couple years, on and off the court, he hasn’t just bounced back and regained his pre-pandemic form, he’s exceeding it.

Coaches also tend to reward winning, which could make this season’s vote more difficult. The East standings are as tight as they’ve been in years. Six teams have started to gain some separation atop the conference, while six others – including Toronto – are hovering around .500. Only three clubs (Indiana, Detroit and Orlando) have fallen out of the playoff race. In other words, there are a lot of deserving players on good teams that should warrant consideration.

For the purpose of this exercise, let’s rule out Pacers centre Domantas Sabonis, the only real candidate on any of the East’s three bottom dwellers. The talented big man has been an all-star each of the last two years and is having another great season, but should have a hard time getting enough votes with Indiana’s 17-32 record.

From there, you could make an argument for 16 different players on those other 12 teams, all of whom will be vying for seven spots – or eight, with the injured Durant expected to be replaced on the roster. Those 16 candidates, in order of their team’s current standing, are as follows:

Forward Jimmy Butler and guards Tyler Herro and Lowry from the first-place Heat.

Guard Zach LaVine from the Bulls.

Guard James Harden from the Nets.

Guard Jrue Holiday and forward Khris Middleton from the Bucks.

Guard LaMelo Ball and forward Miles Bridges from the Hornets.

Forward Jayson Tatum and guard Jaylen Brown from the Celtics.

VanVleet and Siakam from the Raptors.

Guard Bradley Beal from the Wizards.

Let’s start with the guard spots, which should be pretty straightforward. Harden and LaVine are locks, both putting up big numbers on top-four teams. Harden’s scoring and efficiency have taken a hit in Brooklyn, but he leads the league in assists and is nearly averaging a triple-double. Don’t overthink it: both he and LaVine will be in Cleveland next month.

That means VanVleet will have to snag one of two wild card spots, with some stiff competition from the other guards on the list above. Beal and Garland are the most interesting names in that mix.

Beal certainly has the track record that coaches look for – he’s been an all-star in three of the last four years. While he’s averaging a career-high in assists, he’s not having a great shooting season, his scoring numbers are down, and the Wizards have struggled following a hot start to the campaign, having lost four straight games. He’s not a lock.

Meanwhile, Garland is having a breakout season for one of the league’s most pleasant surprises, the 30-19 Cavaliers. One way or another, the Cavs will have at least one representative, especially with the game being played in Cleveland, it’s just a question of whether that’s Garland or Allen.

Allen has been remarkably efficient and is a lynchpin on defence, but the sense is that Garland has a slight edge here. The Cavs are outscoring teams by 325 with Garland on the floor this season – that’s the third-best mark in the league, and nobody else on Cleveland is better than plus-184. There’s a reasonable chance that both Cavs players make it in.

That takes us to the frontcourt. Tatum is probably the closest thing to lock here, although you could argue against him; he and the Celtics have both fallen short of their lofty expectations this season.

It will be fascinating to see how the coaches approach Miami – the best team in the conference, as of Friday afternoon, but one without an obvious all-star this year. Bam Adebayo has missed more than half of his team’s games. Herro’s been great, but it would be unusual for a sixth man to get the nod. We know Lowry’s impact can’t be measured by scoring, and so do the coaches, but can they look past his 13.4 points – lowest since his first season with the Raptors – on 41 per cent shooting?

Butler has looked like an all-star when he’s been on the floor but he’s missed 18 games, although that’s less likely to be a deal breaker during a season in which three quarters of the league’s players have missed time in the COVID protocols. Of the Heat players, he’s the best bet.

With Charlotte’s strong first half, Bridges is an interesting dark horse candidate, as one of the league’s rapidly ascending two-way stars.

Given the surplus of talent at the guard position in the East, the path actually seems cleaner through the frontcourt, so Siakam should have a shot. He’s missed 13 games but, again, that shouldn’t be as much of an issue this year.

The concern would be that he and VanVleet end up splitting votes. They’re both deserving but it’s hard to see the coaches voting for two players on a .500 club when there are so many other teams that warrant representation. Between the two, VanVleet seems to be getting more traction around the league, despite facing tougher competition as a backcourt player. Perhaps that’s because he has a more complete body of work this season, or because he was so close last year when the Raptors simply weren’t good enough to justify voting him in.

Bet on Fred becoming a first-time all-star when the reserves are announced next week, with an outside chance of Siakam joining him on Thursday, or more likely as a late addition, with commissioner Adam Silver naming injury replacements.