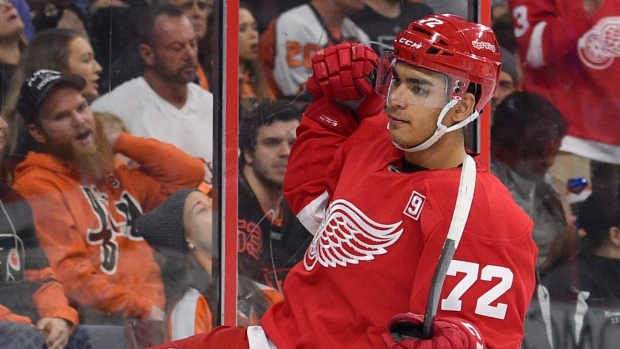 Detroit Red Wings restricted free agent Andreas Athanasiou is expected to decide whether he'll re-sign with the Red Wings or join a European team in the very near future.

TSN Hockey Insider Bob McKenzie reported on Thursday's edition of Insider Trading Athanasiou is expected to sign a contract, in the NHL or elsewhere, by the end of the weekend.

The two sides have been on a standoff since Athanasiou's entry-level contract expired on July 1, with the 23-year-old reportedly pushing for a $2.5 million average annual value on a two-year deal.

“It can only go to Dec. 1 because if he’s not signed by then, he’s out of the NHL for this season, but here’s the latest development," McKenzie said. "The Detroit Red Wings had offered Athanasiou a two-year deal at $1.9 million per year. And now that the season is on and the Red Wings are in LTIR situation, they can no longer give that deal to Andreas Athanasiou, so if Athanasiou is going to sign with the Red Wings, it’s likely going to be a one-year deal now at a shade more than the $1.25 million that the Red Wings were offering him in the summer.

"There is an incredibly high level of exasperation on both sides, from the Red Wings and Athanasiou. This thing is either going to get done here in the next day or so, or it’s likely he’s going to sign to play in Europe and who know when or if he’ll be back in the Red Wing lineup.”

Athanasiou is currently skating with a Swiss team as he waits out the situation and is believed to have offers from the KHL.

According to CapFriendly, the Red Wings have $0 in cap space with 22 players on their 23-man roster. In order for Athanasiou to sign, the team would have waive or trade a player on their current roster.

McKenzie reported last week the Red Wings would only trade Athanasiou for a player of similar offensive skill who is at the same age or younger than him.