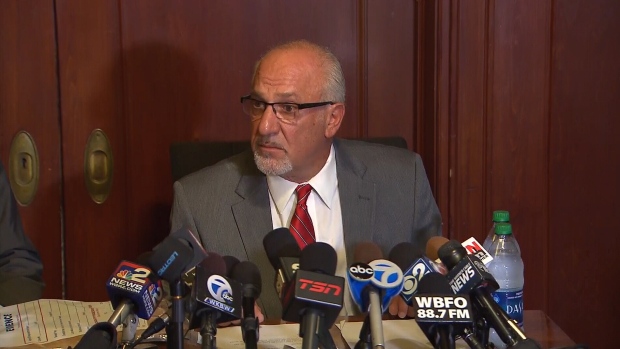 The lawyer for the accuser in the alleged sexual assault investigation of Chicago Blackhawks star Patrick Kane said Wednesday that evidence in the case has been tampered with, setting off a head-spinning day of developments and denials.

Thomas Eoannou, the alleged victim’s representative, said the bag once containing evidence from the rape kit performed on his client at Erie County Medical Center in early August was anonymously delivered to the doorstep of his client’s mother.

The evidence bag was found by the alleged victim’s mother at 1:30 p.m. on Tuesday, Eoannou said.

Eoannou said the rape kit evidence bag is “authentic” and the authenticity was “confirmed” by Erie County Medical Center staff on Tuesday. The evidence bag was ripped open, according to Eoannou, who also showed pictures of the torn evidence bag, and said there were no contents inside.

Two hours after Eoannou’s press conference, the Erie County (N.Y.) Commissioner of Central Police Services refuted Eoannou’s claims in a statement, calling into question the legitimacy of the bag allegedly delivered to the accuser’s mother’s house.

“All evidence related to this case that was given to Erie County Central Police Services by the Town of Hamburg Police Department is accounted for and remains in its original packaging in the possession of Erie County Central Police Services,” John A. Glascott said in a statement. “This includes the evidence in the rape kit and the packaging itself. This evidence has been analyzed and reports of that analysis sent to the appropriate agencies.”

The Hamburg, N.Y., Police Department also issued a statement following Eoannou’s press conference saying their documented handling of the evidence is “unassailable,” and promising to cooperate with “any authorized investigation regarding the handling of evidence and the procedure as such.”

Erie County district attorney Frank A. Sedita III told the Buffalo News that allegations of evidence tampering “will definitely be an investigation.”

“In 27-plus years, I’ve never seen a rape kit tampered with,” Sedita told the News. “It will be investigated, professionally investigated.”

“No one is claiming that the integrity of evidence was compromised before it was analyzed by the technician,” Cambria told the Tribune, adding that “only someone unhappy with the results” would tamper with evidence. “It’ll be interesting to see how this plays out and whether it’s a tremendous backfire.”

If the evidence’s chain of custody was indeed jeopardized, the evidence may not be admissible in a court of law.

The alleged victim’s attorney, Eoannou, wondered aloud whether a “Good Samaritan came forward and provided (the evidence bag) to give us a tip as to what’s going on.”

“This is no hoax,” Eoannou said. “Something has seriously gone amiss.”

Eoannou called for an independent investigation into the appearance of the evidence bag and the alleged broken chain of custody.

“If you’re looking for a sure-fire way to scuttle a prosecution, you tamper with evidence,” Eoannou said. “This is a significant development in this case and we need to bring in the FBI, (New York) State Troopers, or some other law enforcement agency to find out who had that bag, who put it in my client’s mother’s doorstep and why. We’re hoping to get to the bottom of it, who had the incentive to modify and tamper with the evidence.”

Eoannou denied all media reports about the result of evidence tests from the rape kit, saying they were “absolutely not true.”

“We don’t know what was found where,” Eoannou said. “During the course of this investigation, multiple leaks to the media have occurred. (Tuesday) was the most disturbing report of allegedly confidential information. It was reported yesterday ‘DNA tests found DNA evidence of at least one person, and possibly one or two more, in her genital area but found no traces of any DNA from Kane.’ It was also reported that ‘two unknown semen samples in Kane’s victim’s rape kit.’ The consequence in all of this has been to discredit my client in public. We’re hoping to get to the bottom of who had the incentive to modify and tamper with the evidence, rather than have misinformation about semen in one’s undergarments.”

The Blackhawks and Patrick Kane could not immediately be reached for comment. NHL deputy commissioner Bill Daly said there is “no change for now” in Kane’s status in the eyes of the league.

Last week, Kane stated his innocence and vowed to be “absolved” of any wrong doing in a press conference at the beginning of Blackhawks’ training camp at the University of Notre Dame. Kane has not been charged with a crime.

“He’s entitled to his opinion,” Eoannou said of Kane’s comments. “Certainly, he wants to put that out there. He can. What’s most important is, this is a case about physical evidence and the rape kit evidence bag has been tampered with and that’s why we’re here today. Anyone else can say whatever they want.”

Kane, 26, has been under investigation by police in Hamburg, N.Y., for an alleged sexual assault which allegedly occurred at his Western New York home on Aug. 2. Eoannou would not comment on details from the night in question on Wednesday.

Kane has continued on, business as usual, with the Blackhawks in light of the allegations. He made his preseason debut in Chicago on Tuesday night and was cheered loudly by fans, adding an assist in the Blackhawks’ 5-4 win over Detroit.

Eoannou said the alleged victim “has always been determined and remains determined” to cooperate with authorities on the prosecution of the case, playing down any reported talk of a possible settlement.

“People in the media have been discussing people’s semen in her undergarments. She is absolutely devastated,” Eoannou said. “In a rape case, the victim gets attacked. It’s called victim bashing. It’s atrocious. In this case, it has been absolutely devastating to my client. This is supposed to be a secret investigation. This is a classic example why rape victims don’t come forward in rape cases.”