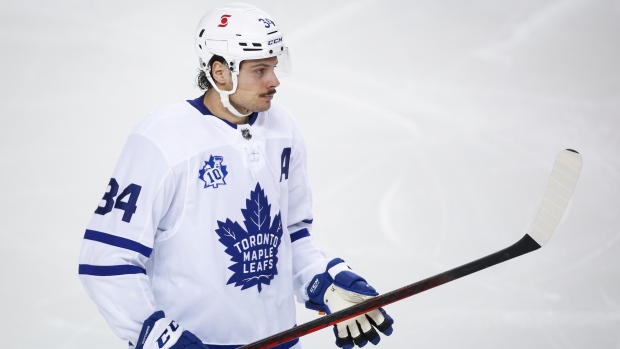 The Maple Leafs practised in Edmonton on Sunday.

For the first time since aggravating a wrist injury on Wednesday, Auston Matthews practised with his teammates. But Toronto's No. 1 centre was limited during the workout. He didn't skate on a regular line and didn't take part in all the drills. He also didn't appear to let loose with any shots.

"He's progressed here today compared to where he's been the last few days so that's very positive," said head coach Sheldon Keefe, who chatted with Matthews on the ice at the end of the session. "He's not ruled out for tomorrow. We're just going to have to see how he is."

John Tavares continued to skate between Joe Thornton and Mitch Marner on the top line.

"I played a lot with Mitch over my time here," Tavares said, "so obviously have a good feel for him, but my first real time playing with Jumbo. We're trying to spread the opponent out and do a good job of moving the puck quick and trying to find open space. Obviously, you're talking about one of the best passers of all time so a real treat to play with Jumbo. It's amazing what he's doing at his age (41) and great to have the opportunity."

Tavares picked up two assists and fired five shots on net (matching a season high) on Saturday while helping hold Connor McDavid to one shot. Per NaturalStatTrick, shot attempts were even between the Leafs and Oilers in the nine minutes the pair of captains shared the ice in five-on-five play.

"John has not gotten enough credit for how he's defended," Keefe said after the game. "His efforts defensively have been a real big part of our success as a team. You ask a lot more of him taking on even tougher match-ups [with Matthews out] and I thought he was outstanding. He was above the puck all night long."

Frederik Andersen took part in a full practice for the first time since sustaining a lower body injury in Montreal on Feb. 20. Will he start on Monday?

"Ah, it's not looking that way, if we're being honest," Keefe revealed. "Today he was on the ice for the better part of an hour and took lots of shots and we're essentially​ just waiting for him to feel comfortable and we don't really know when that's going to be. But today was a very positive step towards that. So, whether it's, you know, goaltending or Auston up front, we got a lot of question marks that we probably won't get answered until game time tomorrow."

Jack Campbell returned from a leg injury on Saturday and pitched a 30-save shutout. However, he was slow to get up and flexed his leg after getting run into by Tyler Ennis late in the first period and Campbell was absent from practice on Sunday.

"We gave him the day off," Keefe said. "Coming off the injury that he has, we want to make sure we manage that properly."

Keefe was noncommittal when asked if Campbell was the likely starter on Monday.

"Between Campbell and Fred and their situations, we got a lot of things to sort through here that I don't suspect we'll get sorted out until tomorrow night," Keefe said.

Michael Hutchinson and Joseph Woll were the other two goalies on the ice at practice.

The Leafs shut down the high-flying Oilers on Saturday without Matthews and Andersen and now they may have to do it again.

"We're being real here," said Keefe. "I mean, we had a great game and that's good and we like a lot about it but, you know, the puck is going to drop again tomorrow night. The scoreboard is going to be back to zeroes and you got to be able to do it again. I mean, we didn't come here just to get one win so we better continue to refocus and get better."

Sunday's practice was geared toward tidying up breakouts and pressuring the puck better in certain situations.

"We know they're going to be coming hard if not harder, because of last night's game," said defenceman Travis Dermott. "We got to be prepared and take it to them like we did last game and just kind of give them no option, but to follow our game plan."

Oilers defenceman Tyson Barrie, who spent last season in Toronto, was impressed with the Leafs' performance.

"That was what we were trying to do last year," Barrie said. "That looked like the team we were trying to be last year. They played a great game. They've got a ton of skill and a ton of poise on that team. They're a puck-possession team and they played that to a tee last night and unfortunately we were on the other end of it."

Of course, last year the Leafs had plenty of good games. What's been really impressive this season is they’ve been able to maintain a strong baseline effort in winning 16 of 22 games.

"We're really focused on being focused and showing up every day whether we're playing or practising or it's an off day and we have to be taking care of ourselves at home," Dermott said. "Everyone is just buying into a team plan that we're going to be ready to go every day."

Even with a healthy Matthews and Andersen, slowing down McDavid and Leon Draisaitl​ is a tall task. McDavid, the NHL points leader, has only been held off the scoresheet in five games and never in consecutive outings.

"We have to continue to have the level of commitment defensively when the puck changes hands," noted Keefe. "We got to be in really good spots and look to slow them down when we can ... We're expecting them to be more like themselves tomorrow and we've got to be prepared to be even better."

How did the Leafs frustrate Edmonton's two-headed monster up front on Saturday?

"We just played a smart, five-man game," said defenceman T.J. Brodie. "The forwards did a really good job of staying above them and trying to take away their speed. They're guys who can get up to top speed real quick and they like to pull up [in the offensive zone] so if you have the pressure coming back you can sort of try and pinch them and take that time and space away. When they do pull-up that's when they make their plays and they're really good at it."

"He had a couple awkward plays that he looked like he was almost beat and then he brought that stick out of nowhere and disrupted the play," Dermott raved.

Despite logging tough minutes, Brodie has been whistled for just one penalty this season.

"He's a smart player," Keefe said earlier this week. "He doesn't put himself in bad spots. He's got a really good stick. His stick is on the ice a lot and disrupts a lot of plays, which at times can lead to getting in people's feet and tripping or hooking or whatever it might be, but he does a really good job with it. A lot of the game that he plays is methodical and that helps keep himself out of trouble."

The Oilers' power play didn't get any chances on Saturday. It was the first time all season that happened.

"There's probably a little bit of luck attached to it, but I thought we did skate and we worked," Keefe said. "We really skated well yesterday and used our body to establish positioning instead of our stick. The more consistently we can do that it’s going to help, but some of it probably is just flat out luck and circumstance."

The return of stalwart defenceman Jake Muzzin also boosted the Leafs on Saturday.

"He's unreal on the ice in shutting plays down and being a defensive mastermind out there, but his voice in the room is equally as important," said Dermott.

"We did a good job of sticking to our game plan," Muzzin said. "Even when we were up a few we stayed with it. We had great goaltending and commitment from everyone on the defensive side of play so it was a good start to the road trip."

Muzzin, who missed two games with a facial fracture, is wearing a full face shield for the first time in his career.

"With sweat coming down, it's tough to clean," Muzzin said, "you got to unclip it so it’s just more annoying than anything."