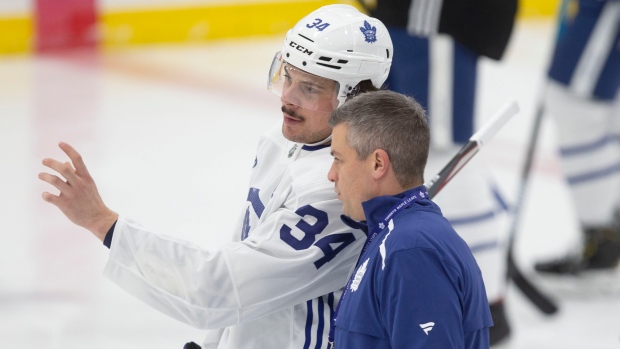 TSN Toronto reporter Kristen Shilton checks in daily with news and notes on the Maple Leafs, who held an 11:30 a.m. practice at Ford Performance Centre on Friday before departing for St. Louis for Saturday’s game against the Blues, the first stop on their four-game road trip.

It’s been a frustrating stretch offensively for Maple Leafs centre Auston Matthews, who finds himself mired in a five-game streak with just one assist. But it’s not just the lack of production that’s bothering Matthews, it’s the opportunities he generates that aren’t finding the back of the net.

“I thought last game [in a 3-1 loss to Colorado on Wednesday], I had three, four or five Grade-A chances,” Matthews lamented after the Leafs’ practice on Friday. “The puck's just not going in. So for myself, I just want to keep shooting and make sure that we're good defensively so we can get the puck and try to challenge the middle of the ice a little bit more and just keep shooting. I think for myself, the puck is eventually going to go in and when it does, hopefully I just keep it rolling.”

To get there sooner rather than later, Matthews will have to find his scoring touch on the road, as the Leafs set off on a four-game trip beginning Saturday through St. Louis and Western Canada. The 22-year-old has struggled to put points up away from Toronto all season, registering just three of his 16 goals in opposing rinks.

Two of those three markers came in the first two games under Leafs head coach Sheldon Keefe on Nov. 21 and 23 and both were on the road. Matthews hasn’t lit the lamp since, and while Keefe understands the concern over Matthews’ lack of recent production, he too is confident in the opportunities created.

“I go back and watch all the scoring chances that he's had in every game and for me, [if] the puck goes half an inch one way, half an inch another, doesn't hit the goalie's shoulder, doesn't tip the edge of his pad, it goes in the net and then all of a sudden the narrative seems completely different,” Keefe said. “I don't get too focused on that. He's in on the scoring chances and he's around the net, he's shooting from dangerous areas so we like that.”

Matthews also doesn’t deny there’s been a learning curve under Keefe, especially in what he’s trying to do defensively. Those growing pains have led Matthews to a minus-7 rating in his last five games, and he knows there’s work to do in improving his play there as well.

“It just doesn't happen overnight, so when you're making these big changes, you're gonna make mistakes, you're gonna get caught out there kind of thinking a little bit,” he explained. “Because you've been so used to one thing and now it's different. It's tough, but we have to adjust. It's been kind of like a bit of a mini-training camp last two weeks, but we're just looking to improve so you're not thinking as much; it's just kind of engraved in your brain [when you’re out there].”

Shoring up defensively is what Keefe most wants to see from Matthews and his teammates as the club gets set to tackle a crucial road swing. After going 3-0-0 to start Keefe's tenure as head coach, Toronto is 1-3-0 in its last four and sits fifth in the Atlantic Division.

“The chances are there [for Matthews] and that's fine,” Keefe said. “We just want to make sure, much like with the rest of our team, that we're good in all the other areas of the game that you can manage shift-to-shift and whether the puck is going in the net or not, it doesn't change how you play in the other areas.”

The Leafs announced early Friday morning that forward Andreas Johnsson suffered a fractured leg in Wednesday’s loss and would be moved to Long Term Injured Reserve, which dictates he will miss at least 10 games or 24 days of action. Johnsson will be reevaluated by the medical staff after the Christmas break and could return at the earliest on Dec. 31 in Minnesota.

In response, Toronto recalled Nic Petan, Pontus Aberg and Martin Marincin from the American Hockey League’s Marlies on Friday. Aberg is the Marlies’ current leading scorer with 24 points (10 goals, 14 assists) in 22 games, and this will be his first shot on NHL ice this season, sliding onto a line with Matthews and William Nylander at practice.

“It feels good,” Aberg said. “I worked hard down there and I’m finally getting a chance. I got to play my game [with the Marlies], a lot of minutes, played power play too which helped. It’s my best producing year in the minors so I’m happy to get the call.”

Aberg signed a one-year, $700,000 contract with Toronto over the summer as a free agent, but didn’t impress enough in training camp to earn a longer look at the NHL level. Before joining the Leafs, Aberg skated in 127 NHL contests between 2015-19, amassing 43 career points for Nashville, Edmonton, Anaheim and Minnesota.

Last season with the Ducks, Aberg appeared in 37 games and set career-highs in goals (11), assists (8) and points (19), before being dealt to the Wild. Aberg said he was ice skating with his family when Marlies general manager Laurence Gilman called him Thursday night with word he’d finally be heading back to the NHL.

“I played pretty much all last year up here,” Aberg acknowledged. “Didn’t work out at the beginning of this year, but finally getting a chance and I hope I can take it.”

Based on what he saw earlier this season from Aberg while still behind the Marlies’ bench, Keefe is confident the 26-year-old has plenty to offer the Leafs.

“He's got a great skill set, he's really good with the puck, both in his ability to carry it and make a play, shoot and score,” Keefe said. “But then also he can skate very well, and some of our best defensive clips in terms of earning the puck back when I was with the Marlies, he was the guy leading the way in that sense. We need to do it every shift. He's going to have to find a way to impact the game and he's going to get a chance to do it with good players.”

Along with inserting Aberg into the lineup, Keefe juggled some of his other forward units during the Leafs’ hour-long practice session on Friday.

Captain John Tavares was absent for the day attending to a personal matter (he'll still be travelling with the Leafs on their upcoming trip), so Keefe had Frederik Gauthier with Mitch Marner and Zach Hyman. Keefe had previously moved Hyman off Toronto’s top line and to its third line with Alex Kerfoot and Kasperi Kapanen for two games, but felt it best now that Hyman re-join his old group.

“[That Kerfoot line with Hyman] wasn't very good in its first game [against Philadelphia on Tuesday]; then I thought it was our best line against Colorado,” Keefe explained. “I thought it was excellent and really showed that the three of them can work well together. So that's very positive for us. We wanted to put Hyman back with Tavares and Marner, and see what we can get with that line now that we [know if we] want to go with Hyman and Kerfoot, that can work really well for us at any time. Those three have confidence in each other so I sort of got what I wanted out of that.”

The decision pushes Ilya Mikheyev back with Kerfoot and Kapanen, while the Leafs’ fourth line remains centred by Jason Spezza between Pierre Engvall and a rotating Petan and Dymtro Timashov. Keefe confirmed Frederik Andersen will be back in the net for Toronto against St. Louis on Saturday.

*Expected to be adjusted by Tavares’ return