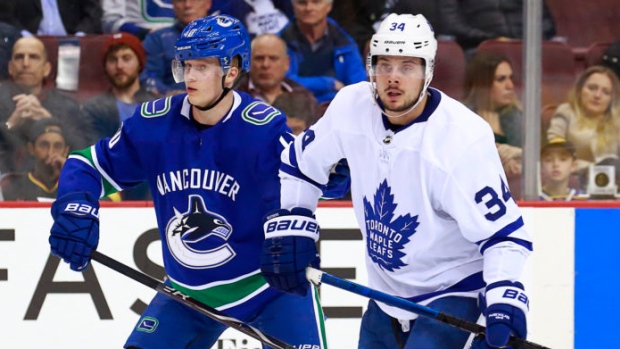 Auston Matthews has grown into the Maple Leafs’ best offensive player, and now head coach Sheldon Keefe wants to tap even more into his defensive game. Matthews will appear this season on Toronto's penalty kill for the first time in his career.

“We don't expect it to be any sort of full-time role or responsibility, but on a part-time basis as needed,” Keefe explained on a Zoom call with reporters Thursday. “We want to start getting him comfortable with those situations and faceoffs in particular is an area where he can bring a lot to us on the left side. We've seen so much in his growth as a defensive player that we believe he can bring a lot to the penalty kill, and obviously the offensive threat that he is on the ice, in addition to some of our other penalty killers, brings a lot, too. So we're going to start to get him some minutes in that regard.”

It wasn’t that long ago, in September 2019, that former Leafs coach Mike Babcock said that when he approached Matthews about potentially killing penalties, the centre basically told him that, “I have never done it, and I don’t plan on doing it.”

Assuming Matthews is now on board (he was not made available to the media on Thursday), having his skill set more involved in the Leafs’ special teams could be a positive. Matthews was 55 per cent in the dot last season, while the Leafs ranked 24th in penalty kill faceoffs and 21st overall shorthanded (77.7 per cent).

From Keefe’s perspective, adding Matthews to the mix there can only help his star continue to rise and establish him as one of the league’s best two-way forwards.

“I don't think you can put any sort of ceiling or limit on a player like that,” Keefe said. “Because of his abilities and his drive, that's why we just continue to add layers to his responsibilities. It's exciting to watch, and I know he's very committed to being great in all regards and we believe he has the tools to do that. He's shown the ability and willingness to put in the work.  So we've got to continue to add layers to it, and give him opportunities to affect the game in more ways than just scoring goals.”

Other forwards who will kill penalties for the Leafs to start the season include Mitch Marner, Zach Hyman, Alex Kerfoot, Ilya Mikheyev and Jason Spezza.

No matter what John Tavares accomplishes personally each season, he measures the success of every campaign by its eventual outcome:

“Expectations are always the same: The goal is always to win the Stanley Cup.”

Suffice it to say, the Leafs failed to reach that level last season, and Tavares himself fell short of the career-best numbers he managed in 2018-19. Through a shortened 2019-20, Tavares ranked 38th in the NHL with 60 points in 63 games and was 28th in goals (26).

By comparison, he was third overall in goals the year before (with 47) and 16th in points (88), offering a benchmark for Tavares to aim at getting back to in the season to come. Tavares said the first step towards that has been setting the right focus.

“I think we're all still living with the disappointment of last season,” Tavares said. “There was so many ups and downs, so many different things that we went through…and then the long off-season was just a lot of time to reflect on that and learn from that experience and build yourself back up to the things you're trying to work on and the habits that you're focusing on. To think about [the Cup] in the big picture every day can be a little bit difficult, so it's more just trying to continue to understand how we need to get through the adjustments and the improvements that need to be made.”

Tavares has started out this training camp on a line with William Nylander and newcomer Jimmy Vesey, a unit that hasn’t yet found its groove as a whole.

“[John’s] done a really good job of working with Jimmy Vesey especially who hasn't been here and [is] getting him comfortable,” Keefe said. “I've liked that line from what we've seen from an individual standpoint, but I think we still need to see more time for it to come together cohesively amongst the three of them.”

Whether it’s helping to guide Vesey or keeping up with Keefe’s tough on-ice training program, Tavares seems to be setting a very particular tone for Toronto.

“What I like about John is it's very clear that he is prepared for the season in a big way,” Keefe said. “To me he looks in incredible shape. We had a very challenging day here on day one especially, with the skating and the way we started the training camp with the conditioning skate, and he was as strong as anybody right to the very end. And that was really great to see, and he's maintained that throughout three tough days. I think he is extremely focused and committed to helping lead our team to success.”

In a normal year, the Leafs might play up to eight exhibition games before the regular season got rolling. Ahead of this 56-game slate though, there will be no official tune-ups at all, so Keefe has manufactured a preseason game of his own on Saturday for players to get acclimated before Wednesday’s opener.

“We're going to essentially replicate a game-day type setting for us. We'll come in in the morning and have a morning skate for the guys, a light practice, and then send them on their way and come back in the evening for at 7 p.m. for a Blue and White game,” Keefe said of Saturday’s schedule.

“We’re expecting that to be as close as we can get to an exhibition game, with our meeting times and all of the procedures we would typically go through in our preparations for any game.”

For most players, the lack of preseason contests is a welcome change. Given there aren’t many open roster spots to battle for this year, Keefe isn’t too concerned that a makeshift exhibition tilt is all the Leafs will have to build off.

“When you're making up the fringes of your team, when you have new incoming players that are pushing for jobs, I think a longer exhibition allows time for those kind of things to play out,” Keefe said. “I think as you break it down for the individual players that are established in the league, they probably don't need more than a couple to be ready to go.”

Morgan Rielly wholeheartedly agreed, saying he had “mixed feelings” about exhibition games in the past and certainly isn’t lamenting their absence this time around.

“I think you just have to take what you can get right now,” he said. “We played a game against each other yesterday [during an intra-squad scrimmage], and we're going to play again in a couple days. So, I think that's lots and I think we'll be ready to go.”

If nothing else, Keefe hopes the Leafs can use Saturday’s game to get in the right headspace for a new year and carry it well into next week’s opening slate.

“It's more on how the players respond and how they recognize the urgency of a regular season, and if they can dial it in,” Keefe said. “And I think it really is as much a mindset, more so than it is the teaching or any of those type of things, so that's really what remains to be seen [without exhibition] but I think our expectation is that we're going to have to get that stuff going and to execute at a high level right from the start.”

Since beginning their on-ice work at training camp on Monday, the Leafs have either worked at 5-on-5 or scrimmaged. That’s all about to change when they return to practice on Friday though, as Thursday’s day of meetings made clear.

“We came in [today] and really set the foundation for our special teams,” Keefe shared. “That will take up the bulk of our day tomorrow on the ice and really each day forward, we'll be working on our special teams. We’ve kept the focus on five-on-five play and the pace and the competitiveness that we needed to see. But now we're essentially in the next phase, working with special teams and then gearing more towards next week.”

That shift brings assistant coach Manny Malhotra into the spotlight. He was hired last summer to replace departing power play coach Paul McFarland, and Keefe gave him the floor on Thursday.

“Specific to the power play, [Manny] is coming here with a very organized and well-researched plan,” Keefe said. “Both on our team and what we've been through the last number of years, and what the incoming players can provide and what their skill sets are and what the trends are around the league to help formulate a plan. It was great to see him present today and spend time with each individual player that's going to be on the power play to begin with, giving them a plan and getting their ideas as well.”