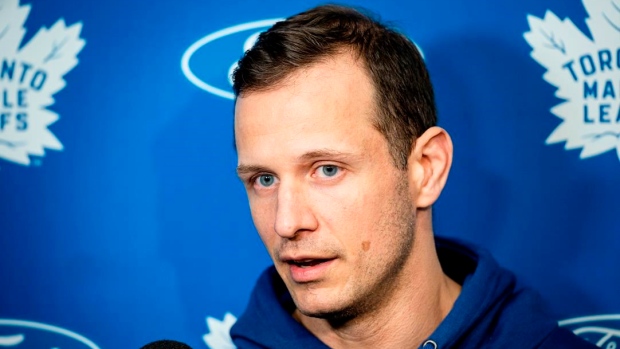 TORONTO – The Maple Leafs have job openings this season and head coach Mike Babcock is getting creative in trying to fill them by auditioning centres Jason Spezza and Frederik Gauthier on the same fourth line to see if he can find a new winning line combination.

"Let’s see if we can get something going here to create something that could really help our team.""

The decision came after each player centred his own line in Tuesday’s 3-1 preseason loss to the Ottawa Senators. Ahead of Saturday night’s exhibition game in Buffalo, Gauthier got the first practice reps at centre with Spezza on right wing and Trevor Moore on the left, but Gauthier ceded the spot to Spezza throughout the group's 40-minute workout.

They could potentially be Toronto’s fourth line when the regular season opens Oct. 2, but trading positions back and forth with Spezza will take getting used to for Gauthier.

“I haven’t played much [wing]. Maybe one year when I was younger, but I’ve mostly played centre my whole life,” he explained. “Depending on where the draw is in the zone, we’re always going to take it on our strong side. I’ll just have to get used to it and you pick it up as you can go. If you can play both, that’s better for you.”

In the course of his 16-year pro career, Spezza has more experience being shuffled around at both the NHL level and while representing Team Canada - so sharing centre with Gauthier is less daunting.

“I think with Goat, [we’ll] kind of fill the first man low [spot] and that’s why it’s good we get to play together,” he reasoned. “We’ll work on our switches and it’s [developing] a little bit of chemistry that way. But I’ve played plenty of wing [before], so it’s not that unfamiliar for me.”

Babcock's tinkering is another test in establishing whether Spezza can accept the role he’s given in the Leafs’ system - a concern for Toronto's coach since the Leafs opened camp last week. With Auston Matthews, John Tavares and Alexander Kerfoot already slotted into the top three centre spots, Spezza was pegged as the fourth-line option when he signed a one-year contract with Toronto in July - a role he hadn’t played before in the NHL.

In Tuesday’s game, Babcock deployed Spezza in all areas, including both the penalty kill and power play. “He’s trying to figure out if he’s interested and we’re doing the same,” he explained.

By contrast, Babcock singled out Gauthier’s performance as one of the Leafs’ best, identifying how he “drove play...was good with and without [the puck], and I thought he was a factor for us for sure.”

Gauthier’s familiarity with the Leafs’ system after four years in the organization may give him a leg up in some respects, but Spezza’s confidence and comfort level have continued to balloon.

“There’s no doubt, we have a lot of new bodies here. For us new guys, we have to get up to speed quickly with the system,” Spezza said. “There are definitely little small details in the system that takes time to become habits, and it’s important you don’t think too much and slow yourself down by thinking too much.

"My timing is getting better, and the progression you want in training camp is to try to play better every day.”

Now both players are motivated by the same goal, which is to be in the Leafs’ lineup on opening night, even if it's on the same line. Last season, Gauthier was a rotating healthy scratch early on and put an emphasis this summer on improving his skating to earn a job from Day 1. The fact that Toronto signed some depth forwards in the offseason (including Spezza, Nick Shore and Kenny Agostino) to compete for bottom-six jobs only fuelled Gauthier further and he's won't be deterred by a potential change in position.

“I’ve been here for quite a while, and every year you battle for a spot,” he shrugged. “It makes me work harder to get ready. I feel quicker. The guys told me I look quicker too, so that’s good. I have to have a good preseason and show them what I can do.”

And for the time being, Spezza will be right beside him, doing the same thing.

“The intensity is high in camp. You can tell there’s desperation to guys trying to get up to speed quickly,” he said. “You can tell the coaching staff is trying to get us up to speed quickly. When you’re a team that’s expected to do well, the whole league is ready for you. You have to make sure you’re up and ready to go because everyone is looking to knock you off [your] perch.”