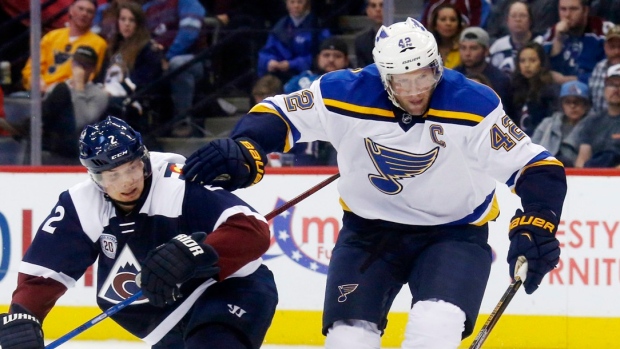 Both will be re-evaluated before the playoffs, Coach Ken Hitchcock said Monday. Allen was injured in the first period of St. Louis' 5-1 victory in Colorado on Sunday night and Backes was injured late in the third period on an empty-net goal by Troy Brouwer.

"Obviously, the sense of urgency with playoffs around the corner is there," Hitchcock said before the Blues played Arizona. "But believe me, if they were able to play, they'd be playing."

St. Louis had 103 points, second overall in the Western Conference, and has overcome injuries to several key players throughout the season including Alexander Steen, Paul Stastny, Patrik Berglund and both goalies.

"It's not what we had hoped for," Hitchcock said. "It just seems to be what our season's been about, and we've got to step up."

The 31-year-old Backes has dressed in all 79 games. He is second on the team with 21 goals and fourth with 45 points.

Backes didn't play after getting bumped on the side boards, but he did a postgame interview on NBCSN. Hitchcock said some players arrived Monday unaware that the captain been hurt.

Hitchcock said the injuries increased the degree of difficulty because the Blues were playing on consecutive nights without time to iron out adjusted roles, and coming off altitude, which can affect stamina.

"Right now, it's kind of fly by the seat of our pants," Hitchcock said.

Two injured players, defenceman Jay Bouwmeester and rookie forward Robby Fabbri, skated Monday but aren't ready to return. Hitchcock said the team was leaning on having Tuesday practice be optional and getting full participation from both on Wednesday.