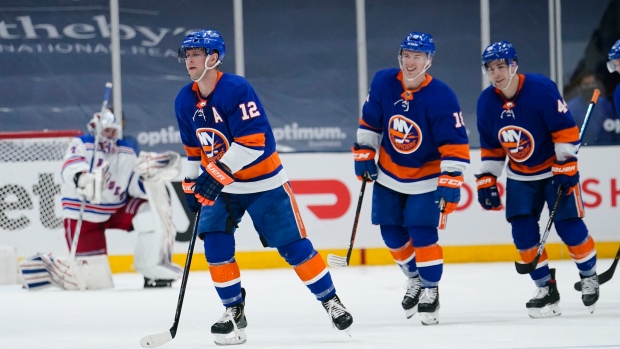 UNIONDALE, N.Y. — Josh Bailey had two goals and an assist in his return from a two-game absence, Anthony Beauvillier added a goal and three assists, and the New York Islanders beat the Rangers 6-1 Tuesday night.

Jordan Eberle and Jean-Gabriel Pageau each had a goal and an assist, and Brock Nelson also scored. Semyon Varlamov stopped 25 shots to improve to 17-9-3.

“We had a really solid game,” Pageau said. “To have Josh back in the lineup, it's big, not only on the ice, but to have him in the locker room, just the influence he has on everyone. ... Beau was everywhere tonight on the ice. He was moving his feet, winning all his battles. It was a fun game for sure.”

The Islanders won their second straight and seventh in the last 10 to pull into a tie with Washington atop the East Division ahead of a stretch of three straight games against the Capitals. Pittsburgh, which held on to beat New Jersey 7-6, remained one point back in third.

“We were able to create, get some good looks and have a solid game,” Bailey said of playing on a line with Pageau and Beauvillier. “It's just one game and you look to just keep moving forward.”

Kevin Rooney scored for the Rangers, who had won four straight — all against New Jersey — and lost in regulation for just the second time in 12 games (8-2-2). Igor Shesterkin finished with 22 saves to fall to 0-3-1 in four career starts against the Islanders. He gave up six goals for the first time in 40 career NHL games..

“When you lose 6-1 in the fashion that we did, it certainly is humbling,” Rangers coach David Quinn said. “I thought we were sloppy, I thought we were too high-risk, too east-west, weren’t playing fast enough.”

The Rangers fell six points behind Boston for the fourth and final playoff spot in the East. The Bruins beat the Sabres 2-0 and have two games in hand on the Rangers.

The Islanders took a 3-1 lead into the third and scored three times in a 3:38 span midway through the period to put the game away.

Pageau fired a one-timer into the top right corner off a pass from Beauvillier for his 13th of the season at 7:44 to give the Islanders a three-goal lead. Beauvillier then set up Bailey for a one timer from nearly the same spot with 9:44 left. It was Bailey's second of the game and eighth of the season. After a Rangers turnover, Eberle beat Shesterkin for his 15th to make it 6-1 just 1:06 later.

“I didn’t think we came up with the level of play we needed to,” the Rangers’ Mika Zibanejad said. “It was disconnected. We were a little too far away from each other and couldn’t really get that forecheck that we have and the offence that we usually have. ... This one stings and we got to learn from this.”

The Islanders, who scored just two goals while losing two of three on their road trip, improved to 19-2-2 at home this season. The Rangers, 4-0-2 in their last six on the road, were 9-1-2 in their last 12 games at the Nassau Coliseum.

“We just played the right way, we stayed on top of people," Islanders coach Barry Trotz said. “We played more of a 200-foot game. ... It was a committed effort by everyone. I liked our whole game.”

Leading 1-0 after 20 minutes, the Islanders scored twice in a 4:07 span early in the second period to pad their advantage.

Nelson tipped Nick Leddy's centring pass in front past Shesterkin for his team-leading 16th of the season at 1:38. With the Islanders on their third power play of the game, Beauvillier, who matched his career high with four points, then scored from the right circle off a pass from Noah Dobson to make it 3-0 at 5:45.

The Rangers got on the scoreboard with just under nine minutes left in the second as Brendan Smith's shot from the right point deflected off Rooney's stick and past Varlamov. for his seventh.

Bailey, back after missing the last two games, gave the Islanders the 1-0 lead late in the first. Jean-Gabriel Pageau cut toward the net and passed across the front to Bailey, who quickly put it in past Shesterkin for with 2:18 left.

“I thought we did a really good job obviously getting our power play going and we were on top of them,” Beauvillier said. “Our forecheck was going. It was a good game from top of the lineup and bottom of the lineup.”

Rangers defenceman Jacob Trouba was helped off the ice and to the dressing room midway through the first period after taking a hard hit in the corner from the Islanders’ Matt Martin. Trouba stumbled as he got up and fell back to the ice. Moments earlier, Trouba had levelled Martin with a hard hit near the sideboards. The Rangers later announced Trouba would not return to the game.

There was a moment of silence before the game for the victims of the shooting earlier in the day at the Stop & Shop grocery store in West Hempstead, New York, about four miles from Nassau Coliseum. At least one person was killed and two were injured in the incident.

Rangers: Host Philadelphia on Thursday night in the opener of a two-game series and five-game homestand.

Islanders: Host Washington on Thursday night in the opener of a three-game series — the first two at home and the last on the road.